66-year-old twin painters Mark and Michael Kersey have spent over two decades collaborating and creating art under one mysterious name— Mr. Atomic. The twins describe their art as narrative pop surrealism, an amalgamation of their obsessions with comic books, science fiction, and pop culture.

The Kersey’s new exhibit, on display at the Perrysburg Municipal Building, Mr. Atomic: Brushes with Genius, includes 20 new paintings showing more of what viewers love about Mr. Atomic’s zany creations. They’ll also get a glimpse into what Mark Kersey describes as their “last chapter.”

There is something altogether otherworldly about the twins, who are as eccentric as viewing their work would lead you to believe. They like to add a layer of mystery to each of their paintings by never signing their individual names to a completed piece; it’s always “Mr. Atomic.” Even though they work on each piece individually, they consider everything that comes out of their studio as a creation by one entity. 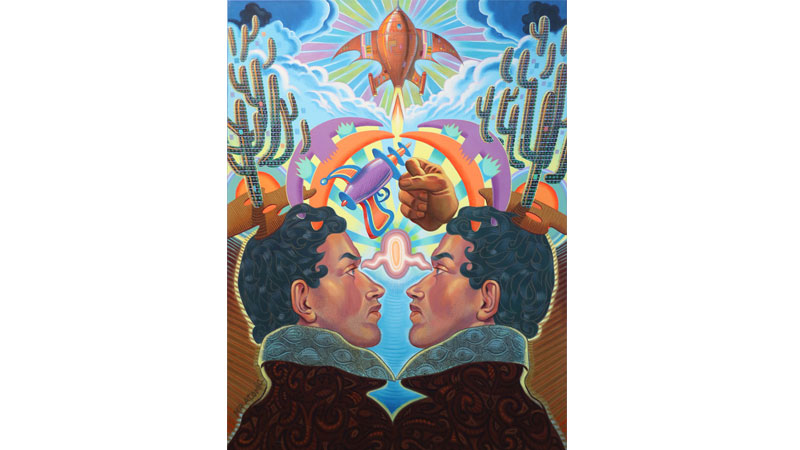 “We were quite satisfied that with each other’s input into the originality and technical excellence of each painting, that authorship was incidental,” explains Mark. “We also regarded the other twin as an equal, and that the finished concept was greater than the two parts. We devise our concepts and articulate them quite independently but always seek input along the journey.”

Approaching the idea of their work’s ownership as a shared story, “knowing full well that there will always be the exceptional pieces and also the less successful pieces,” Mark points out, “You simply do your best, and the tides of time will elevate the loftier pieces to their proper place in your catalog. I’m also happy to take credit for Mike’s greater pieces and I’m sure the feeling is mutual!”

The canvas paintings you’ll see on display at this exhibit, as well as others they’ve created over the years, are a departure from Mr. Atomic’s beginnings. The original pop art painted cut-outs of fruit, flowers, and other more decorative pieces held whimsy, but left the twins feeling dissatisfied with the medium. 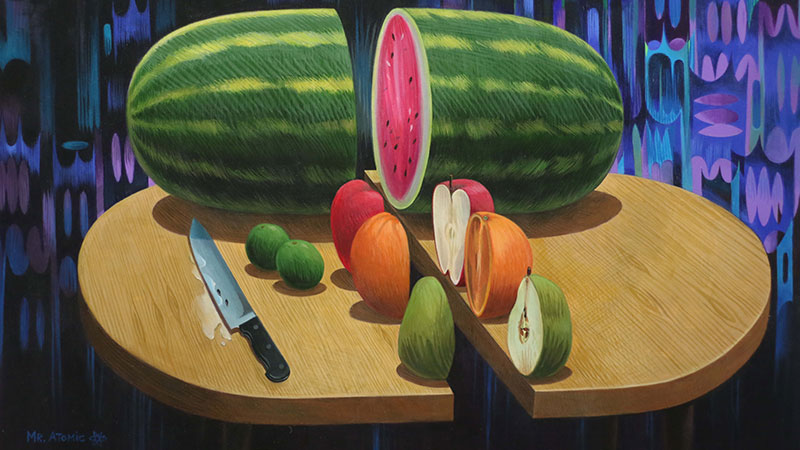 Mark says, “We distanced ourselves from the original ‘cut-outs’ because our imaginations were limited by the set silhouette shapes,” adding that “the painting of our ideas on a simple stretched canvas seemed a more logical and successful path to our goals.”

Mr. Atomic know who they are as artists, and they don’t compromise on that vision, even if it means limiting their exposure to art they don’t care for. The twins study art from around the world, but only if they find it “worthwhile,” says Mark.

“We must always filter what we experience so that we’re not unduly influenced,” he says. “We have very concrete ideas that need to be realized. A blank canvas is a virgin landscape waiting to see some dose of life. We don’t restrict ourselves, but let inspiration lead the charge.”