Extra eyes: Police body camera usage rises in Toledo and around the country 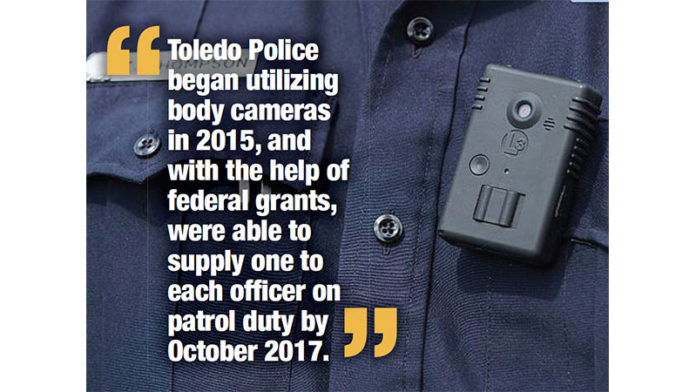 A number of reforms have been proposed to help heal the growing divide between citizens and police. One that enjoys near universal support is the outfitting of officers with wearable body cameras. By recording video and audio of interactions between police and citizens, these body cameras enable transparency and facilitate trust between the public and law enforcement.

The benefits are so notable that many police departments are outfitting their force with them. However, as the use of body cameras becomes more widespread, questions remain about policies surrounding how— and when— they are used.

A Brief History of Body Cameras
In 2014, President Barack Obama made body cameras for law enforcement a key response to growing calls for police accountability amid the burgeoning Black Lives Matter movement. While warning that body cameras were “no panacea,” the Obama administration nonetheless implemented measures providing over $23 million in federal funding for body cameras to law enforcement agencies across the country.

Toledo Police began utilizing body cameras in 2015, and with the help of federal grants, were able to supply one to each officer on patrol duty by October 2017. Toledo Police Chief George Kral stated that outfitting each officer with a body camera, while interacting with the public, is a policy priority.

Last June, a flurry of police reforms were introduced by Toledo City Council following the death of George Floyd in Minneapolis. Among them was an ordinance (O-229-20) that required Toledo Police officers to wear activated body cameras during all interactions with citizens.

The ordinance was tabled following Mayor Kapszukiewicz’s creation of the Community Police Relations and Reform Committee, a 35-member body charged with considering and recommending a list of policies to the Mayor. The committee has yet to submit those recommendations.

The George Floyd Justice in Policing Act of 2021 was passed in February by the United States House of Representatives which would, among other things, require state and local law enforcement officers to wear body cameras. A vote on the bill is pending in the United States Senate.

Perspectives
Toledo Police Patrolman’s Association President Michael Haynes spoke in favor of body cameras, stating that they help skeptics put more trust in the police department. He cited the police shooting of Kwamaine O’Neal at the Weiler Homes in January and of Lamar Richardson on Lagrange St. in July 2018 as prominent examples of how body camera footage allowed the public to see what officers saw, alleviating tension and quelling potential unrest.

Many in the community support the use of body cameras for police as well. “If there are cameras monitoring activities in the police station then there should be no problem with them wearing a camera outside of the station,” reasoned Toledo resident Winona Robinson.

Still, some citizens harbor a more critical view. “Body cameras are themselves a good thing, but the devil’s in the details, especially when it comes to access to the footage,” said Julian Mack of the Community Solidarity Response Network (CSRN). “The issue becomes who has access to that footage and when, as well as making sure that officers have them on and don’t turn them off.”

“A Good Start”
Can camera footage be released quickly and publicly without sacrificing personal privacy? Can police budgets adapt to growing camera image recorded storage and technical support costs? How much policy will be set at the national level, and how much will be set locally?

Despite their popularity, it’s clear that many questions still remain with the way body cameras are used – and how they will be used in the future.