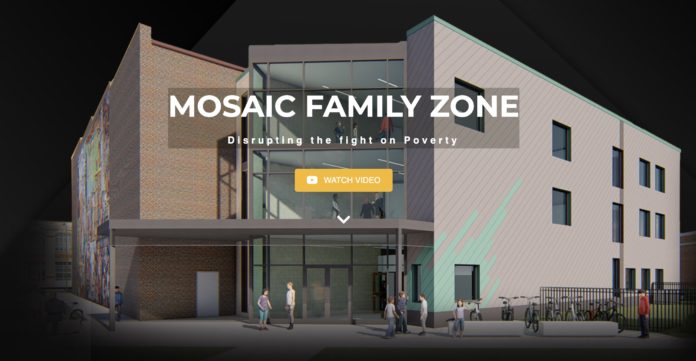 David and Kelly Kaiser had a goal: to make a difference. Both Kaisers wanted to change the face of poverty in our area and start a long term program to address it. Born and raised in Toledo, they knew a great place to begin. In 2007, the couple took over a run down church on Cherry St., wanting to become more significant in the community.

The previous owners taught the Kaisers how to manage the church, but the couple quickly became overwhelmed with poverty challenges in the neighborhood. In a 2021 analysis, 24/7 Wall St. found that the poverty rate in Toledo is the highest in all of Ohio. Now, David Kaiser is the executive director of the Mosaic Family Zone, an outreach program established by Mosaic Ministries at 1842 Broadway St., where he is the minister.

“Most of the people we’ve served in the last fifteen years have lived off of some form of support. Typically it is less than $800 a month,” he said. David Kaiser has since expanded the church’s program to include breakfast six days a week, and providing daily dinners. The couple has also supplied groceries to 2,000 households through their partnership with McLaren St. Luke’s hospital.

After some intense research, David Kaiser found a potential partner in the Harlem Children’s Zone, a non-profit for children and families in poverty, run by Geoffrey Canada. The next step was a 2008 conference in New York explaining the details of the program. A fairly large grant was given to the church by ProMedica, allowing them to start Baby University (BU). Kelly Kaiser is the executive director of BU, as well as David’s wife.

“The model itself is to create a career pipeline, which we call cradle to purpose,” David Kaiser said.

The representatives from Harlem shared that if a low income parent does three things for their child, they will be able to keep up in school: First, read every day, for at least 15 minutes a day, from birth to five years old. Second, provide proper healthcare. Third, learn how to discipline a child in a more productive, rather than abusive, way.

“We have added a fourth rule, which focuses on training for how to develop empathy. Reading is a huge part, with very few parents reading to their kids. We found that not many families can afford books, so we reached out and got donations from the community,” said David Kaiser.

Baby University is a ten week class, and 900 parents have already undergone the training. It is known nationwide that low income children start 60 percent behind middle class kids, on the first day of kindergarten.

“TPS tells us that in our district, it is 75 percent. Many children living in poverty are so far behind other children that they can’t possibly catch up. There was a Brookings Institute study that said that a child born in poverty in Toledo has a 17 percent chance of escaping poverty in the course of their life,” said David Kaiser.

“We’ve had you kids come through our preschool, and 97 percent of those kids tested at kindergarten readiness. This helps even the playing field a bit. Parents have doubled the amount of reading time in the household, and parental skills are increasing as well,” David Kaiser continued.

The couple has been notified in the last 90 days that they have a formal affiliation with the Harlem Children’s zone, making the Mosaic Family Zone the fourth in the country.

Call 419-517-6221 to get involved, or to participate in the program. Visit Mosaic Ministries website at https://www.mosaicministries.us for further details.