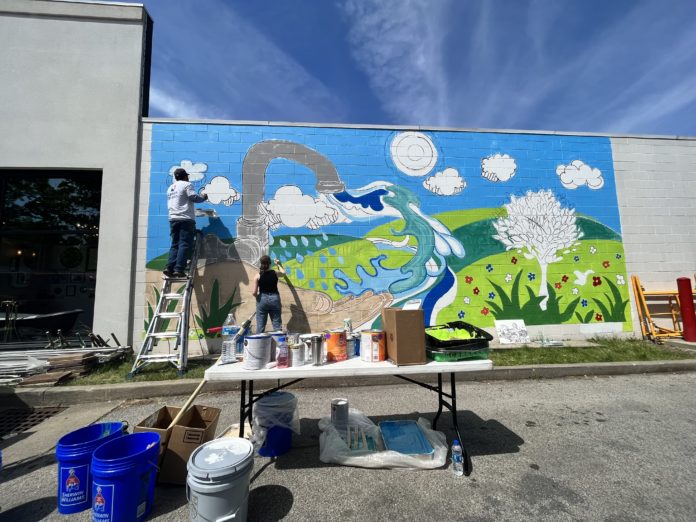 A new wall mural is being created in the city of Perrysburg after months of planning and waiting on approval from the city to proceed with its design and initial construction.

Currently being painted on a white wall outside of Waterhouse Bath & Kitchen Studio, which is located in Perrysburg at 125 E. Indiana Ave. The mural will commemorate the 70th anniversary of the owners’ plumbing journey.

The owners of the studio, the Williams family, have been in the plumbing industry since 1953 and have lived and worked in the Perrysburg area for nearly 70 years.

As a token of gratitude to the community, the Williams family will be constructing a 16.5 by 30-foot-long mural on the east side of the Waterhouse studio —a project which took nearly five months of initial planning and approval to begin construction.

The mural will highlight the connection between natural elements and humanity with hues of blues, green and gray painted in unison. With water being the mural’s biggest focus, each element will represent humanity, nature and industry and symbiotic relationships. 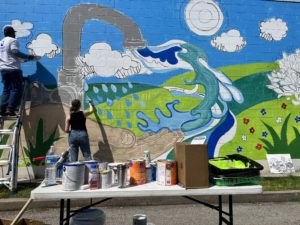 Amy Siders, showroom manager of Waterhouse bath and kitchen studio, explained the importance of creating a work of art for the community to enjoy and the studios’ commitment of giving back to the city of Perrysburg.

“We want this mural to be not an advertisement for Waterhouse – no logos or even our name appear within the borders of the proposed mural – but a stunning addition to the outdoor gallery that the city of Perrysburg has already begun to cultivate with its sculpture garden and other prominent pieces of outdoor art within the city limits,” Siders said. “We want this to be a project that the entire community can share, finding the beauty in the change to the landscape – a white wall magically transformed into a lasting community treasure.”

Project completion is expected on June 24, 2022, followed by a ribbon-cutting ceremony.

Viewers and members of the community are encouraged to visit Waterhouse bath and kitchen studio, located at 125 E. Indiana Ave., or view Facebook and Instagram for updates on the construction process 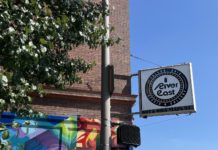 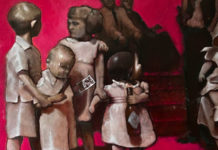 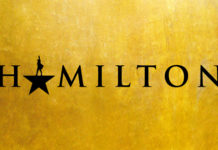