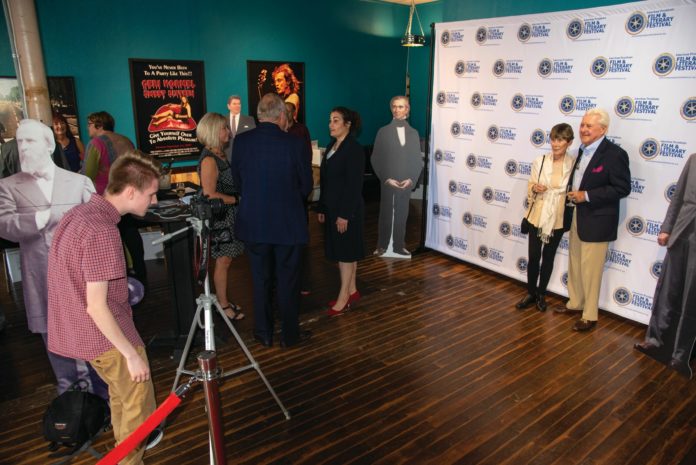 A Unique Festival that Brings Together Film, Literature, and American Presidential History. Fremont, Ohio, is the home of America’s first presidential library. What better place to hold a film festival exclusively focusing on the American Presidency? Through the lens of people, places, politics, and power, this first-of-its-kind day festival features filmmakers of all ages and skill levels, bringing a range of views the festival hopes will give attendees fresh perspectives and lively, thoughtful, debate. The festival features feature both feature-length and short films, a special keynote speaker and attendees can even walk the red carpet.

Running September 30 – October 1, the festival will be screening four feature-length films. Divided We Fall: Unity Without Tragedy is a documentary conceived in 2016 by director Larry Anderson and strategist Tom Cosgrove. The initial concept was a reality show meant to bridge the divides in our democracy by bringing ordinary citizens together to talk about complex issues. In this case people who were both strongly for former President Donald Trump and those who disapprove of Trump. The goal being to bring both sides out of their comfort zones to talk with each other.

Royaye Kaghazi is the story of an albino teenage boy who falls in love with a young girl. Director Ali Atshani was born in Isfahan, Iran, and has directed over 20 films including Democracy in Daylight criticizing his country’s 2009 election and caused the film to be heavily censored.

Finding Courage, directed by Kay Rubacek, is the story of a former journalist for the Chinese Communist Party (Yifei Wang), living in exile in San Francisco and struggling to settle into life in America while working to heal her family’s wounds from their tragic past. She is seeking justice for the murder of her sister at the hands of the Chinese authorities. Rare undercover footage of a meeting with the director of the labor camp where Yifei’s sister was killed reveals shocking admissions of torture, slave labor, corruption, and a general disregard for human life pervading the camp system today.

Exclusive interviews with former Chinese Communist Party officials provide a unique insight into the hidden world of terror that many Chinese citizens live with, never knowing that life can, and does, exist with freedom outside their world.

Truth is the Only Client, directed by Todd Kwait and Rob Stegman, is a documentary on the Kennedy assassination. While there have been countless movies and books on the subject, none have relied on extensive interviews with the men who conducted the investigation. Those interviews are at the heart of this documentary.

Short films include The Militiaman about a group local militia in rural Pennsylvania; The Last Race, dealing with a whirlwind electoral campaign in the Midwest and a political novice navigating new love; and Monumental Devotion: The McKinley National Memorial, a PBS documentary on the president’s relationship with his wife, his time in office, and the construction of a monument in Canton, Ohio, as his final resting place. Red Carpet Event

Want your photo snapped on the red carpet? October 1, at the historic Strand Concert Theater in downtown Fremont, you can take a walk down the red carpet and get your picture snapped with your favorite presidential cutouts. Craft beer samples are available for a fee at 5:45 pm followed by a dinner at 6:16 pm. After dinner, hear keynote speaker Dr. Robert Schmuhl discuss how the presidency has changed throughout America’s history. Schmuhl is Professor Emeritus in American Studies and Journalism at the University of Notre Dame.  He is the author/editor of fifteen books, including his newest expanded edition, The Glory and the Burden: The American Presidency from the New Deal to the Present, which will be published on October 1, 2022.

They are included in the $60.00 all-access pass.
For more information and tickets go to – https://americanpresidentsfilmfestival.org/tickets/