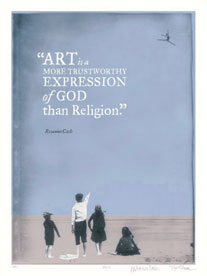 “Art is a more trustworthy expression of God than religion,” the poster reads. A provocative phrase, but the cool, almost oceanic background the words float upon,and the haunting image of a dancer gracefully suspended in the sky, make it seem more profound than sacrilegious.

The words are from Composed, thenew memoir by veteran singer-songwriter Roseanne Cash, daughter of the legendary Johnny Cash. The image is a limitededition
art poster created for Cash by Toledo’s own Steve Mockensturm, founding member of the Madhouse design studio. Madhouse does extensive commercial work for clients including the Toledo Museum of Art, the Toledo Zoo, and Bowling Green State University. But the group’s music-related work, done through Capital A,Madhouse’s screenprinting and letterpress shop, is a labor of love. (Mockensturm is a musician himself, playing guitar and keyboards for local group Athens Wheeler.)

A labor of love

“It’s kind of a sideline for us,” Mockensturm says. “We keep an eye on calendars and blogs, and if a band we like is coming by, we offer to do a poster.” Madhouse has done work for popular indie acts like Blitzen Trapper and The Black Keys, but Cash is by far the best-known musician to utilize their art. And remarkably, the collaboration
came about in an intimate way. In the past, Mockensturm had mainly made contact with artists’ management. “A lot of times the musician will be the last to see the piece,” he says. “It’s rare to get an artist to call you directly.”

Through the twenty-first century magic of social networking, Mockensturm was able to reach Cash one-on-one. “Access to people has leveled out,” he says. He simply
reached out to Cash on Twitter, and as they started talking the two turned out to have a natural understanding.

Madhouse made t-shirts and stickers for Cash’s band, and took them to Cash’s concert in Ann Arbor last fall. Cash loved the work and soon after approached Mockensturm about creating the limited-edition print. Cash was thrilled with the finished product saying, “When I first saw it, I got goosebumps. Steve is a great artist.” Each poster is printed by hand, numbered and signed by both Cash and Mockensturm. The first 25 prints were sold at a benefit last month, with the proceeds going to Secret City, a New York-based artists’ salon and support group. “It’s like a church, without religion, for artists,” Mockensturm says.

The project was a huge success and a great opportunity, and Mockensturm hopes to work with Cash again. “Music’s very important to me,” he says. “And as a
musician and supporter of the arts, who wouldn’t jump at the chance to do work for an artist they admire?”

The poster sells for $75 plus shipping, and is available for purchase at capital-a-prints.com