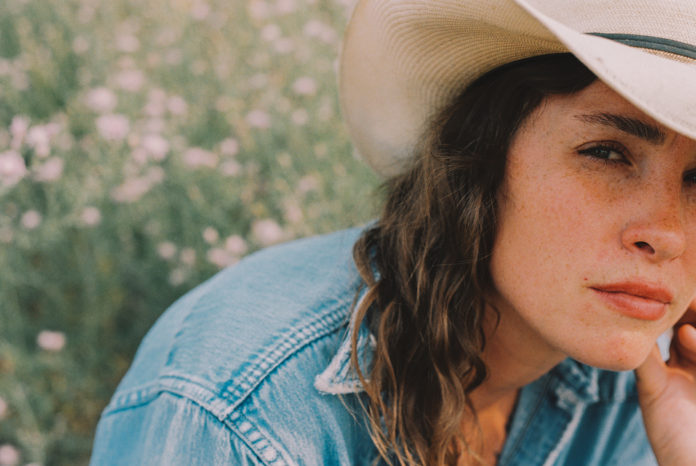 Riddy Arman did write a song about a horse once, a long time ago, but no one has ever heard it and she doubts anyone will.

And while there are few mentions of horses on her self-titled debut album, she does imagine herself riding one whenever she sings “Old Maid’s Draw,” her high-lonesome ode to working as a ranch hand in the steep hills of Montana.

Which is what she does these days, after growing up in Maumee and making detours to New York City and New Orleans in her 20s. When not rounding up cattle, she also writes poignant originals like “Spirits, Angels, or Lies,” a song about her father’s deathbed visitation by the ghost of Johnny Cash.

After her haunting performance of the song for a Western AF session went viral on YouTube, Arman went into the studio to record her album for La Honda Records, took to the road as opening act for label-mate Colter Wall, and is doing some shows this summer and fall.

With her husky Elsie and her Labrador retriever Strix (named after a genus of owls) listening in the background, Arman spoke to us recently about her search for the obscure country singer Carlene Jones, the comparative virtues of horses versus four-wheelers, and the mystery of crossing over to the other side.

Q: Over the past year, you’ve been compared to Glen Campbell, Neko Case, Dolly Parton and Johnny Cash. Probably other people too. Which of those resonates most with you?

Riddy Arman: Oh my, that wigged me out so much. I’ve seen the review that compared me to Glen Campbell. And I’m not sure what exactly they’re referencing about Glen Campbell. Perhaps the lyrics? But I don’t really know.

Q: I don’t think Glen Campbell wrote many of his own songs. They should have compared you to his songwriter Jimmy Webb.

Arman: Oh yeah, sure, I’d take it! Well, you know, Dolly Parton did go through a phase in her early career where she wrote only sad songs. I think on the first album she made for a record label, they were all sad songs she had written. So I guess I related more to that one, because it’s the beginning of my music career and they’re all sad songs so far. But I really couldn’t tell you, because I don’t know who I could be compared to. It’s hard to see when you’re within the comparison.

Q: You included a cover of Kris Kristofferson’s “Help Me Make It Through the Night” on your album. What covers will you be doing live?

Arman: I don’t do that many covers, but the ones I tend to do are by country singer-songwriters who didn’t really make it that far. One is called “None for the Shepherd” by Carlene Jones. I found that song in a YouTube hole while searching for videos by Blaze Foley, who was harmonizing with her on that recording. I recently tracked her down, but I haven’t been able to get in touch with her. She does live in Austin, Texas, and some of my friends in their 60s know her from the folk-music scene, but I’m not really sure if she plays music anymore. I haven’t been able to find any of her songs other than that.

Arman: I don’t right now, sadly. I have enough trouble finding people to watch the dogs when I’m traveling, so the horse is just something that I can’t do right now. But there’s one for me at work that I use.

Q: So you use them to round up cattle?

Arman: Yeah, they’re much more effective for moving cows. Well, people use four-wheelers, but the horses are just a gentler way to move the cows. It’s just quiet, it’s very quiet, and the cows respond really well to horses. But it takes a lot longer, which is sadly why people don’t use them that much anymore. But in the place I live, there’s a lot of rocky, steep country where you couldn’t bring a four-wheeler. So the only way you can get the cows really is to bring a horse up there.

Q: How does life in Montana compare to where you grew up in Ohio?

Arman: Well, I grew up on a river in Ohio with lots of forest and private land around, so it felt very open and free to a kid and we pretty much went wherever we wanted. It’s similar out here, but with a beautiful mountain range. Being amongst something so much bigger than you is really humbling, and I love how it makes me feel every day just getting to stare at them. It definitely keeps my head on straight, I think. It’s a lot more wild out here, too. Where I grew up, if you saw a bald eagle, it was just the most rare cool thing. But here, the bald eagles are pretty much like pigeons. You know, they’re just everywhere, and lots of bears and elk. There’s just much more diversity in animals, so that’s been really awesome to be around.

Q: I wanted to ask about the song “Spirits, Angels, or Lies” and its reference to Johnny Cash. How did that come about?

Arman: That song is a true story. My dad was in a hospice-care facility, where he had been in a coma for a couple of weeks. He had just come out of it and my mom was there visiting him, and he very matter-of-factly told my mom that Johnny Cash had visited him in the night. There happened to be freight-train tracks right behind the room he was in — so there was constant train traffic —  and he told her that Johnny Cash had stopped the train and wanted him to leave with him. And he told Johnny that he was going to stay.

Anyways, my mom kind of brushed it off, because, you know, when people are in their last phases of life, they’re not really there. So she just figured it was something he hallucinated or made up; she didn’t know. But they did a crossword, she says, and hung out a little longer, and then she put the news on. And one of the news stories was about Johnny Cash’s death. He had died that night at 3 or 4 a.m., right around the time my dad claimed that had happened.

The thing was, my father wasn’t a Johnny Cash fan. I’m sure he liked the music and wouldn’t have turned it off, but he was more of a folk-rock guy. So it would be different if he was like, “Neil Young came to visit me.” We’d be like, “You wish.” And it just wigged my mom out. So the words are “Spirits, angels, or lies / We’ll never know what someone sees with their own eyes.” It’s just kind of supposed to be a comforting song about death, because we never really do know what it’s like to cross over. And, needless to say, my mom’s obsessed with Johnny Cash now.

Q: You say you have written sad songs up to now. What sort of reactions do you see at concerts to your songs?

Arman: Well, yeah. [Laughs.] I’m reckoning with the fact that that’s part of what I do. It’s such a sensitive time in everyone’s lives that playing these sad songs really does poke at the walls people put up. At my shows, I will kind of glance out and see people crying, or having a bit of a hard time. So I’m trying to make my shows half stand-up comedy, half sad horse-girl music. Um, and I think the two go together quite well.

Q: There’s nothing wrong with a little catharsis every now and then.

Arman: Yeah, I agree. Although I feel bad when I can tell it’s someone that doesn’t want to be having that catharsis in that moment, you know? I feel a little sensitive to that. But I shouldn’t take that on, I suppose. That’s what a therapist would probably tell me.