While silent films went out of style with flappers and Prohibition almost 100 years ago, the Toledo Museum of Art’s “Sounds of Silents” series now showcases the art form. At 7pm on Thursday, February 6, the series screens Aelita, Queen of Mars. This 1924 Russian silent film will be accompanied by world-class musicians and composers Marc Ribot and Anthony Coleman. Aelita, a thoroughly strange and touching piece of Soviet science fiction, tells the story of a Mars-bound alien queen and an Earth-bound scientist, and how the pair devises a way to find each other. The musicians have composed themes for the film, but much of what the audience will hear will be improvisation.

Ribot and Coleman have a long history of collaboration, and both bring decades of creative expertise to the stage. Marc Ribot is perhaps best known for his session guitarist work with Tom Waits and others, including Elvis Costello and McCoy Tyner. Performing alongside and/or scoring films since the late ‘80s, the guitarist explained, while there is a fair amount of improvisation in the Aelita score, he also pulled from Soviet revolutionary songs and avant-pop to compose what he called the “psychology” of the film. 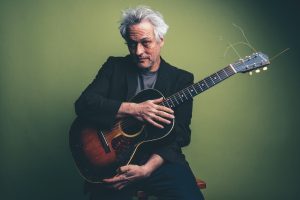 Ribot emphasized the relatability of music in movies and how that affects his composition process. “There’s a remarkable common language [in music] that came through opera and into Hollywood film. Its amazingly constant,” he said. This ‘common language’ of film scoring has its roots in romantic music, opera, and orchestral traditions, which Ribot said are all “incorporated in a special way to express unbalanced psychological states; horror, terror, extreme agitation.” He noted the main difference between his work on an experimental rock album versus a film score, is that the latter possesses an element of commonality that much other music lacks. No matter where in the world someone lives, or what their exposure to music may be, they will all recognize certain emotional themes from the music in a movie — this explains, for example, why we tend to tense up when the violins get louder during films.

“A musician, in film scoring, isn’t just responding to the images on the screen,” Ribot said. “They are understanding [it], they are helping to create the narrative, they’re understanding how the image functions, and adding something that’s necessary, psychologically, for the film.”

TMA Manager of Programs Scott Boberg began the “Sound of Silents” series in 2015, inspired by the museum’s Peristyle Theater, with its 1933 Skinner organ. A unique aspect of the Peristyle’s architecture: It seems to have been built to accommodate the organ, not the other way around, giving credence to the point that the art museum’s whole purpose exists for more than just the visual art visitors usually expect to see.

“The museum, for most people, is visual, but there’s a history of music in its context,” Boberg explains. “Silent film is multisensory; a universal medium.”