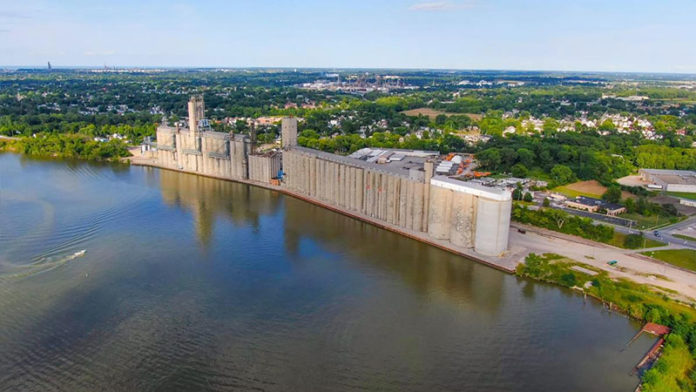 Christina Kasper, president of Urban Sight Incorporated, although not a Toledo native, has grown to love the city. “This is like a little gem of a city. We have so much here, and this is a city really dedicated to the arts. Historically, [Toledo is an] unbelievably creative city, an innovative city. And the thing for us that we really want to emphasize is that the reason this city is what it is, is because of each individual and what they bring to the table,” Kasper explains.

That spirit helped inspire the upcoming Glass City River Wall project, painted on the side of the 28 ADM silos that line the Maumee River. “The Glass City River Wall is the largest mural in the country, consisting of a 160,000-square foot mural, projecting a message of positivity and hope, embracing the past, present and future of Toledo, and everything that makes us special,” Kasper said.

A blossoming idea
Kasper is the project manager for the Wall, and one of the three concept creators, along with Spaceshop’s Brandy Alexander-Wimberly and Perrysburg Energy’s Nicole LeBoutillier. The idea began a few years ago, as Alexander-Wimberly and LeBoutiller traveled along the Maumee River. “They went past the ADM silos and thought aloud, ‘You know, it’d be really cool if it was painted.’ And they called me— I am an art consultant by trade — and asked, ‘What do you think about that?’”

The trio began to put the project together, eventually getting advice from the Arts Commission. One of the first steps was reaching out to ADM— as the international grain trader owns the “canvas”.

“Brandi reached out to ADM Cares, their foundation arm— and was very persistent, actually. Saying, ‘You need to talk to us!’ She was great. Eventually, we just had a conversation with them, and they loved the idea. They gave us our first grant, and they said ‘Show us what you can do. Put together a plan,’” Kasper said.

Elevating the community
ADM’s seed money helped launch the project. Soon the team put out an RFQ (Request for Qualifications) aimed at finding an artist. The team eventually chose Gabe Gault, an internationally recognized artist from California. Kasper admits to hearing some criticism about not choosing a local artist, but noted that there really weren’t any ‘local’ applicants. The RFQ went out to anybody and everybody,” Kasper said. “The closest that we had to a local artist was a gentleman from Detroit.”

“The spirit of the project is to elevate the entire community. So we want to make sure that local artists have an avenue to be involved. We’ve partnered with Lourdes, we’ve partnered with AAF [the American Advertising Federation of Toledo], we have an education component. Detroit Sign Painters is actually going to execute the mural itself. They are putting together their team, and we have encouraged them very much to reach out to the local community.”

The proposed mural will depict the first farmers of the region, recognizing the area’s Native American population. Gault and his team are scheduled to begin work on the painting in June, anticipating that the project will be finished by August— in time for the Solheim Cup. “We want everybody to see themselves in that mural, and remind themselves that their uniqueness is what has made this city amazing,” Kasper said.