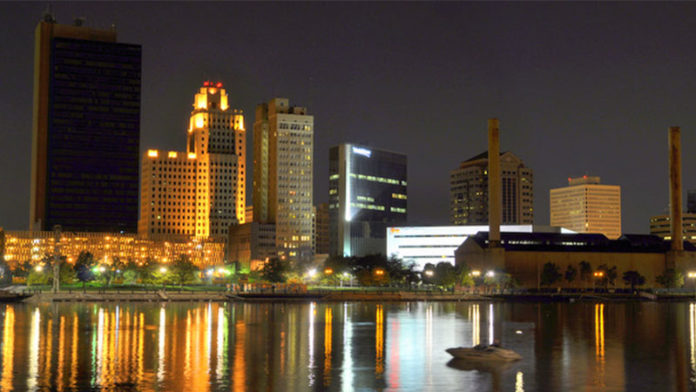 ANSWER: A. Washington Irving. According to the 1940 book The Ohio Guide, the story goes that Irving, writer of Rip Van Winkle and The Legend of Sleepy Hollow, was traveling in Spain and suggested the name to his brother, who lived in the northwest Ohio area. This story is also almost certainly false: Irving had already returned to the States in 1832, a year before Toledo was founded. A more likely legend attributes the idea for the name to Willard J. Daniels, a local merchant.

ANSWER: D. Lithophanes. The Blair Museum of Lithophanes was created after lifelong Toledoan Laurel Gotshall Blair left his collection of over 2,000 of the molded porcelain plaques to the City of Toledo. The museum was opened at the Toledo Botanical Garden in 2002, but forced to find a new home after closing in October of 2019. The collection is now housed at the Schedel Arboretum and Gardens in Elmore.

ANSWER: D. The pink color. Owens Corning first added red dye to their fiberglass in an effort to make it stand out in the marketplace, but the resulting insulation came out pink. Eventually, the company decided to stop adding the dye, thinking that the color would discourage male consumers, but customer complaints made them reconsider. Owens Corning introduced the Pink Panther as their mascot in 1979.

ANSWER: C. Frogs. Metropark volunteers and staff have counted frogs and collected data about them every spring for more than 25 years, according to the Metroparks website. The Lucas County area was a haven for frogs and toads before it was settled, hence one of Toledo’s earliest nicknames, “Frogtown.”

8. Which of the following was NOT a name used by a Toledo hockey team?

ANSWER: D. The Toledo Flames. The Toledo Mercurys joined the International Hockey League in 1947. For the 1949-50 season, the team changed its name to the Toledo Buckeyes, but it quickly changed back for 1950-51. After the Mercurys folded in 1962, an IHL team from Omaha relocated to Toledo, becoming the Toledo Blades. Other names used by Toledo hockey teams: The Hornets, the Goaldiggers, the Storm and, of course, the Walleye.

9. The Toledo Museum of Art features pieces by all of the following artists except…

ANSWER: A. Leonardo da Vinci. Though no works by da Vinci are kept at TMA, they do house a sculpture attributed to Andrea Verrochio (1435-1488), who was da Vinci’s teacher.

ANSWER: D. Who’s Afraid of Virginia Woolf? I’ll See You in My Dreams starred Danny Thomas, who was born in Deerfield, MI but raised in Toledo. Scrooged featured a cameo from hometown favorite Jamie Farr, playing himself. Thank You for Smoking co-starred Katie Holmes. The film version of Who’s Afraid of Virginia Woolf? featured Elizabeth Taylor, Richard Burton, George Segal and Sandy Dennis, all acting legends, but none of whom have Toledo roots.

ANSWER: B. 1896. Professional baseball first came to Toledo in 1893, but the team (the “Swamp Angels”) officially became the Mud Hens in 1896, inspired by a swamp near the field that was home to a number of American coots, or mud hens. They briefly changed the name to “Iron Men” for two years beginning in 1916, and after the team moved away from Toledo in 1952, a new club— the Toledo Sox— took its place. The Sox also departed in 1956, and when a new team moved in almost a decade later, it adopted the Mud Hens name.

ANSWER: C. Jefferson. According to James Lester’s Too Marvelous for Words, Tatum first attended Jefferson School in the Glass City before moving to the School for the Blind in Columbus. (Tatum had suffered from impaired vision since he was a baby.) Soon he would transfer back to Toledo, attending classes at the Toledo School of Music.

ANSWER: B. Kenny Rogers. “Lucille” was actually the second single to come out of the self-titled album, as “Laura” had released to modest success in 1976. “Lucille” proved a much bigger hit, helping make Kenny Rogers (the album) the first of 12 records by the artist to reach #1 on the Country chart.

ANSWER: A. Burt Reynolds. Packo’s website tells the story of how, in 1972, the famous actor was starring in a production of “The Rainmaker” in Toledo and stopped by Packo’s for a meal. When someone asked for an autograph, Reynolds signed his name to a hot dog bun. The tradition continues today, though the buns are now foam replicas rather than actual bread.

ANSWER: B. Manosakis. Immigrating to America from the Greek isle of Crete in 1916, Gus Manosakis had his last name changed to Mancy on Ellis Island. He worked in Ohio for years saving money from jobs working at steel mills before opening “The Ideal Restaurant” with his cousin Nicholas Graham in 1921.

ANSWER: C. 1986. The first Lights event featured a mere 50,000 lights decorating the path. Today, more than one million bulbs are used every year, and construction on that year’s displays begins the preceding summer.

ANSWER: B. A racetrack. Since the early part of the 20th century, the space that would eventually host the Toledo Mud Hens was the home of the racetrack for the Lucas County Fairgrounds. In the 1960s, a committee spearheaded by area politician Edward “Ned” Skeldon worked to convert the track to a ballpark in an effort to lure baseball back to the city. The gambit worked, and in 1965, the new Toledo Mud Hens began playing in what was then called Lucas County Stadium. The ballpark was renamed in Skeldon’s honor in 1988, just a few months before he passed away.

ANSWER: C. Tiedtke’s. The Tiedtke brothers, Charles and Ernest, first opened a grocery store at Summit and Monroe in 1894. By 1910, the expanded business had moved to Summit and Adams, where it would stay until closing in 1972. The first science museum on the land, COSI, opened in 1997, before being forced to close in 2007 due to lack of funding. The approval of a new operating levy meant that the renamed Imagination Station would reopen in 2009.

ANSWER: D. Elton John. Dylan, Joel and Sinatra all performed within weeks of each other in October 1978. Elton John did play at the venue himself in 1980.