Frank Hannon, lead guitarist of the band Tesla, is a pretty laid-back dude— and with good reason. He’s on a tour bus, taking in the country and just living life, man. Hannon, who got his start on the guitar at age 10 (picking up the instrument while recovering from a broken leg), went on to form the rock band Tesla, a group that was an influential part of the hair metal movement of the late 80s/early 90s. And while hair metal was effectively ended by grunge in 1994, Tesla persevered because they were always a little more cerebral than their “do drugs/get laid/repeat” contemporaries. Not that they didn’t party a bit, mind you.

Tesla, who’ve sold over 14 million albums over the 36 years they’ve been a band (to be fair, they took a four-year break in the late 90s), hits Centennial Terrace on Wednesday, May 9. You probably remember their songs “EZ Come EZ Go,” “2 Late 4 Love,” “Edison’s Medicine,” “She Want She Want” and “Love Song.” Hannon writes or co-writes most of their songs and the band is touring on the strength of their release of a live version on their first album, 1986’s platinum-selling Mechanical Resonance. We checked in with Hannon to see what he remembers of past visits in Toledo, relating to younger fans and those electric cars with the similar name.

Have you ever played Toledo before?
Oh yeah, we always drive through Toledo. I have some memories there for sure.

Anything in particular?
I have a few different memories. I remember one time, back in the heyday, when we were still drinking. We got pretty hammered there at the arena. It was a pretty crazy sight. And then I remember I came through with my solo band and we played in a club, it was Moon dog Mane show back in the ‘90s. Sometimes all those places get all blurred together, I think we played near some railroad tracks. I can’t really remember, but looking forward to coming back.

Why did you name that band after Nikola Tesla?
When we were in the club phase back in ‘82, in order to get gigs, we had to play a lot of Top 40 music, which really sucks, but that’s what’s called paying your dues. We were playing poppy music and we were called City Kids, which was our take on Loverboy. When it came time to making our first album, we all agreed that we wanted to change our name. We were batting things around the dinner table and Cliff Bernstein and Tom Skeoch were sharing a book called Man Out of Time. And in that book, it had pictures of Nicola Tesla with lightning swirling all around him. They were learning about Tesla, about how he was an underdog and never got any credit in the history books. And we all went, that’s a really cool concept for a rock & roll band. Basically, no one had ever heard of him. This was long before the freakin’ car came out. Nobody had heard of freakin’ Nicola Tesla and he changed the freakin’ world.

How do you describe your music to someone who’s not familiar with you?
I would describe our music as more influenced by artists of the 70s than artists in the 80s. Even though we came out in the 80s, we were influenced by bands that had a lot of heart and soul, like Lynyrd Skynyrd, The Rolling Stones… we tried to keep heart and soul in our lyrics and keep it real. Lucklily we stayed away from writing cheesy party music— we were never really into strippers and going out and getting too cheesy. That’s kind of helped the longevity of our songs and our music. Fans really love our songs— we write about love and leaving home, songs that feel real to us, and they appreciate it. 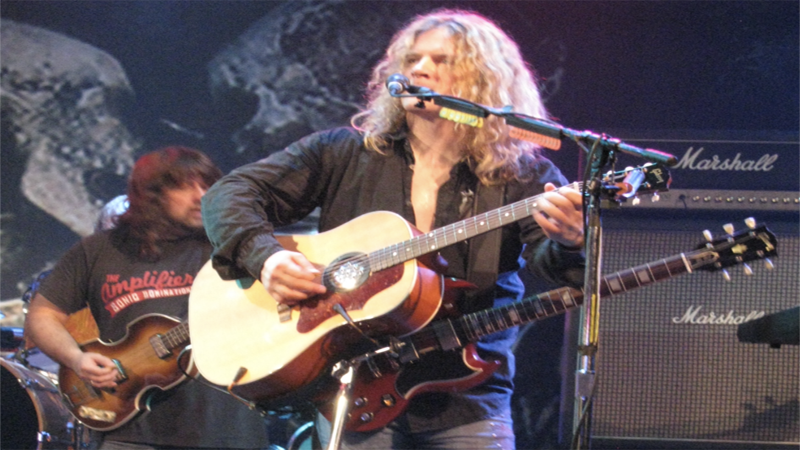 How often do you get asked about the Tesla Car Company?
Oh geez… every once in awhile. When someone can’t think of something else to ask about, they ask about that.

Was that an issue when they came out with the name?
No, not at all. Our band is in the entertainment industry and they’re in the transportation automotive industry. So there’s no real conflict there. And honestly, I’m pretty happy about it because it brings more attention to Nicola Tesla. He really was responsible for so many things. This iPhone that I’m talking to you on, it’s an idea that Tesla had. If you read some of his journals, he said, ‘Someday, in the future, you can take a picture on a handheld device and send it instantly to another place in the world.’ Those are his words, spoken back in 1890. Any attention that can be brought to Tesla is great.

What album of yours should people start with?
It would be great if people were really interested in albums. People seem more interested in songs and instant gratification. If they do want to check out an album, Time’s Makin’ Changes (their greatest hits album) chronicles our first chapter of hits, from 1986-1996. Our first album though, Mechanical Resonance, we just did a live version of it this year, and it’s got a new single on it, “Save That Goodness.”