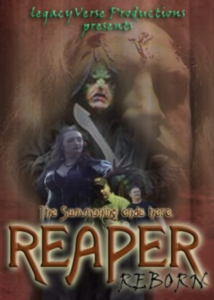 Fall is here and with Halloween quickly approaching, it’s the season for all things frightening and scary. Legacy Verse Productions, spearheaded by Keith Munden, has released a vast collection of independent short films over the last 20 years that are sure to satiate the spirit of the season.

Since forming in 2002, Munden has written and produced over 50 short films, ranging from modern horror to comedy and documentaries. While most of his work centers around the horror genre, Munden doesn’t take himself too seriously. “If you don’t give the audience something to laugh at, they’re going to find something to laugh at,” he explains. “In typical horror movies, you’ve got to occasionally wink at the audience.”

As a kid, Munden got hooked on the Saturday afternoon Monster Movies that aired from the ‘60s to the late ‘80s on Cleveland’s independent television station, channel 43. Also, “I’m a huge George A Romero fan”, Munden explains.

“I remember hearing about him when I was a kid and watching “Night of the Living Dead.”  Munden is also a huge Kevin Smith fan. After watching Clerks, he realized that if they can take a simple idea and turn it into a movie, then so can he.

Munden worked with Blade Independent Studios in the ’80s, starting as a boom operator. When the studio closed in the late ’90s, Munden recruited many of the same people to work on his own films, Legacy Verse Productions, which he formed in 2002. Finding out that a lot of old films didn’t cost a large amount of money to produce was influential to Munden. “That’s something I really like about Romero’s work because you can see the nuts and bolts in his movie-making. They’re not overly flashy”, he explains.  Munden and his crew often work with very limited funding for their projects. “The most expensive film we’ve made cost $500. We try to make them for very little money so we’re not losing money on it”, says Munden. “

Some people go deep in on a high budget, and they never make more than one movie because they’ve spent everything making just one. You don’t need to spend a lot of money unless you’re using a lot of special effects or want to hire high-profile actors”, he explains. Being on a low budget, however, does come with its own charms. According to Munden, “you have to think outside of the box when you don’t have much of a budget. In one of our films we had a scene where someone’s head explodes. We had to get really creative to figure out how to pull that off.”

With feature titles like Reaper’s Revenge, Harvest of Blood, and A Midsummer Nightmare, Munden’s collection of work keeps with the traditions of the classic horror film genre. Several new projects are currently in the works, so stay tuned.