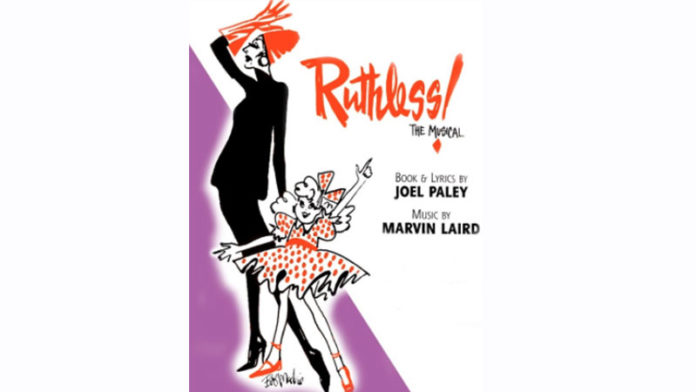 UPDATE 6/1/22: Due to a COVID illness in the production, the performance dates for Ruthless! have been moved to June 17-26. The below article has been adjusted.

Fame — an enticing word to many — to stand out from the crowd and have people know your name the world over. But how far will some go to actually attain it?

Village Players Theatre provides a closer look into the funny, perhaps scary, but thrilling adventures of a ride to fame with their take on the musical, Ruthless! The audience can enjoy watching without personally experiencing the potential setbacks — like murder, for instance— that the cast will confront on stage.

Jabs and Wit
The original production of Ruthless! premiered Off-Broadway in 1992. Enjoying a successful run of over 300 performances, the show was nominated for numerous Drama Desk Awards and saw several revivals with productions around the world. Interestingly, the original New York run had Tina played by Laura Bell Bundy, now a longtime Broadway performer, but a
couple of even bigger future stars were her understudies— Natalie Portman and Britney Spears.

For each Village Players’ season a committee suggests options for the board of directors to consider, and Dave Nelms, current board VP, part of Village Players for nearly seven years, was excited to be offered the role as director. Always a fan of Ruthless!, Nelms is excited to bring Toledo a memorable, and relatable, show. “[The audience is going to get] a great night of theatre. I believe [they] will find the show very funny. Regular theatre-goers will appreciate the jabs at the musical comedy genre, and everyone will enjoy the witty
humor,” explained Nelms.

The Price of Fame
The show is cast with six actors, all veterans of the Toledo theatre scene. “[Ruthless!] is a spoof based loosely on the movies The Bad Seed, All About Eve, and Gypsy. It asks two questions: Is talent passed on from generation to generation, and how far will people go
to be famous?” said Nelms.

One cast member looking to become famous is Jennifer Braun, playing Judy, everyone’s’ favorite housewife. Navigating the ups-and-downs of her ‘star wanna-be’ daughter, and before seeking some limelight herself, Braun is no stranger to the subjects of fame or tal-
ent when the curtain finally closes.