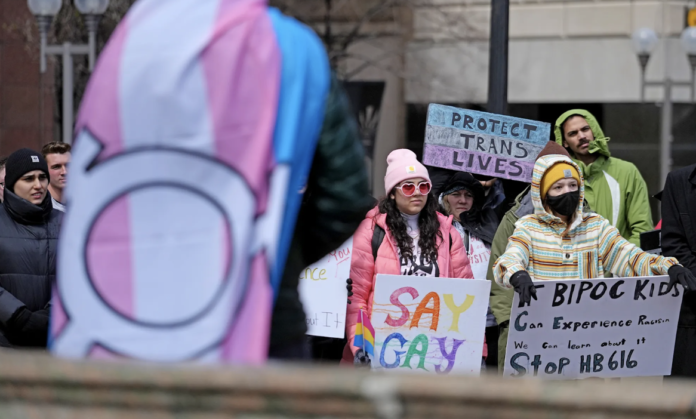 On April 4th, 2022, House Bill No. 616 was introduced by Ohio representatives Mike Loychik and Jean Schmidt. The bill aims to redefine “the promotion and teaching of divisive or inherently racist concepts in public schools.” This introduction follows the newly passed House Bill No. 1557 in Florida, that many have nicknamed the “Don’t Say Gay” bill.

Florida’s bill, titled “Parental Rights in Education”, will go into effect on July 1st, 2022 and has been especially criticized for Section 3 that reads directly as follows:

“Classroom instruction by school personnel or third parties on sexual orientation or gender identity may not occur in kindergarten through grade 3 or in a manner that is not age appropriate or developmentally appropriate for students in accordance with state standards.”

In a press conference at Classical Preparatory School, Florida Governor Ron DeSantis spoke of critics of the bill, claiming that they were advocating for “woke gender ideology” that was “inappropriate” for children.

The bill also places a heavy focus on the rights of parents to access their children’s school medical information, records and services. It states that schools may not enact any policies that prohibit “notifying a parent about his or her student’s mental, emotional, or physical health or well-being.”

The Trevor Project, a non-profit LGBTQ+ organization, says these provisions “appear to undermine LGBTQ support in schools and include vague parental notification requirements, which could effectively require teachers to ‘out’ LGBTQ students to their legal guardians without their consent, regardless of whether they are supportive.”

Ohio’s legislation puts educators in a similar situation, but instead of placing the focus on parental involvement in schools, HB No. 616 places restrictions directly on the curriculum that’s permitted. Section 3313.21 (D) reads:

“The school district board shall not select any textbook, instructional material, or academic curriculum that promotes any divisive or inherently racist concept described in section 3313.6029 of the Revised Code.”

The bill defines “divisive or inherently racist concepts” as Critical Race Theory, Intersectional Theory, The 1619 Project, diversity, equity and inclusion learning outcomes, inherited racial guilt and any other concept that the state board of education defines as divisive or inherently racist. These other state-defined concepts are not discussed.

If a school district is found to be in violation of these clauses, the Department of Education can withhold funds from that district and the superintendent will be responsible for settling official complaints against a district, administration, or a specific educator. The State Board is also prohibited from adopting any standards, curriculum or professional training and development that falls under the previously defined “divisive and inherently racist concepts.”

Legislators behind the bill spoke in favor of it on Tuesday, May 31 at a committee meeting in Columbus. The bill will be heard again in the fall, where both supporters and detractors will be able to testify before the committee. While this bill is still in an introductory stage, area advocates have already been outspoken about the bill and what it means for the future of education in Ohio.

The Ohio Education Association says “Rather than persisting with these disingenuous attacks on educators and public schools, we need pro-public education policies that enable students to think critically about the world around them and empower them to be proud of who they are, regardless of where they come from, what they look like, how they express their gender identities, or who they – or their parents – love.”

“The message today is pretty clear that LGBTQ lives, people of color lives are not divisive. They’re not up for debate. They exist, we exist. We are everywhere,” City Council member Nick Komives said. His statement comes from an April 12th press conference held by the Lucas County Commissioners to voice criticisms of the bill. TPS Board member Sheena Barnes and Reverend Willie Perryman, president of the Toledo Chapter of the NAACP, were both in attendance.

Lucas County Commissioner Peter Gerken made a significant statement at the press conference, as well. “The issue of race in America is critical and it is not a theory. All we’re asking to be able to do is teach race as it occurred… The culture in America changes. Change happens without our permission. Change happens despite our opposition. Change is here in America and it should be.”