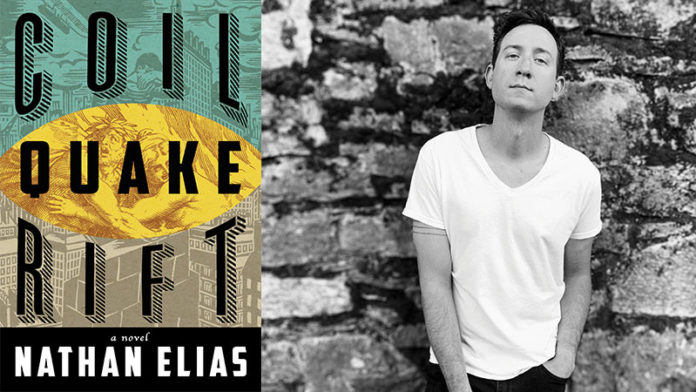 Can a futuristic story drawing from the lifestyle and allure of its Southern California setting have a “419” vibe? It turns out that yes, it definitely can. And that story was inspired by a time of change within Toledo’s creative community.

Coil Quake Rift, a story that combines personal crises with natural and supernatural disasters, is the first novel by Toledo native Nathan Elias. He chose to use the Los Angeles area as the setting for this story because “there is an undeniable mystique and appeal to Los Angeles that draws people to it in a continuum,” he explained. He moved from Toledo to LA in 2012; today, Elias and his wife live in Nashville.

The book’s four characters (including two from Toledo) connect in this intricately-woven story. Newlyweds Margot and Knox, and their ex-lovers Jason and Tiffany, are tangled in a web of love, loss, betrayal and beginnings. An earthquake and a black hole (possibly created by Tiffany before her death) cause Margot, Knox and Jason to ponder critical choices that impact the direction of their lives.

A Toledo Foundation
A key theme in the novel is that “choices make us who we are.” Elias chose to take advantage of the creativity community he found in Toledo as a way of building his dream career. From Old Orchard Elementary to TPS’s Toledo Technology Academy and the University of Toledo, Elias “grew up loving the arts and desperate to be a creative person. There’s something about Toledo creativity that, when I was ready to reach out, there were groups there for me,” he said. “There’s nothing I couldn’t find here.”

Elias grew up mostly in West Toledo, specifically on Roosevelt Street (twice— both growing up and in his first apartment). At UT, he studied film and video, philosophy and English/creative writing, and he worked as the Arts and Life Editor with the Independent Collegian. At that time, he found many people “dedicating their lives to creating here,” including several UT professors, especially the late Jane Bradley, whom he calls a “huge
mentor.”

A potent canvas
Elias lived at the Collingwood Arts Center, made films with friends in town, and participated in Toledo’s poetry and filmmaking communities. “There were lots of exciting things happening, and Nathan was at all those places, along with a small group of us inspired weirdos,” said Ryan Bunch, formerly with The Arts Commission, who today works at the United Way of Greater Toledo.

Through these contacts Elias won acting spots in area film productions but was also making a name with his writing. A Myriad of Roads That Lead to Here: A Novella in 2017, the 2018 poetry volume Glass City Blues and the stories in 2020’s The Reincarnations all draw on his Toledo memories and locales.  “Nathan played a distinctly important role in shaping the general arts community that Toledo has become and was very influential to me personally in how I thought about supporting literary artists,” said Bunch. “It has been tremendously fun to watch from afar as he’s found success in doing the  thing that he genuinely loves and wants to do.”

Looking forward by looking back
Coming up, Elias has several interesting and challenging projects. He is turning Coil Quake Rift into a screenplay for a possible movie production, and he’s working on a Young Adult fiction story set in LA. “I’m also beginning work on a new piece that’s a sister-city aspect of Toledo, Ohio and Spain, including hauntings,” he said. “It’s a gothic + fantasy + historical book, and that’s all I’m saying for now.”

Coil Quake Rift is available through most booksellers, such as Barnes & Noble and Amazon, along with Montag Press.