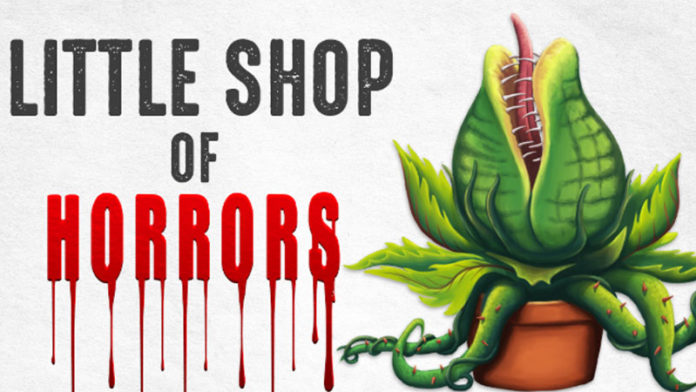 Jared Hoffert, who is directing the production of Little Shop of Horrors at Croswell Opera House which opens Friday, July 15, knows the show very well— he’s been involved in four productions of Little Shop during his theatrical career.

Hoffert first did Little Shop in high school, a few years after the 1986 movie version starring Rick Moranis had come out. Then he performed it again in college. Then again with a production at Ann Arbor Civic Theatre in 2014.

“It’s one of those shows that you can do forever. It’s fun, it’s a great show. It’s got not only a cult following but also a mainstream following, as well,” Hoffert explained.

Suddenly Seymour
So when Croswell announced Little Shop as one of its 2022 summer season shows, Hoffert was definitely interested, this time wondering if he might contribute something more to the show— as director.

“I met with [Jere Righter, Croswell’s artistic director], and told her what my history with the show was, and a bit of what I was envisioning. And sure enough, a couple of weeks later she gave me the call and said, ‘Are you still interested in this?’”

This is not only Hoffert’s first time directing Little Shop, but also the first time he has been a director at the Croswell. “I love working at Croswell as a performer. The quality of the productions is very high. And it’s a great place to work as an actor, and I’ve been work-
ing there since 2014, as well,” he said.

Feed Me
Hoffert hasn’t chosen a simple show for his Croswell directorial debut. Though the cast of Little Shop is relatively small, it can be a challenging show technically, particularly its centerpiece— the plant named Audrey II, which grows in size and complexity as the evening goes on.

“There’s an actor that will do the voice, and there’s another performer who actually does the body, so it’s a two-person character. I have a rehearsal coming up where it’s just a day for puppetry, so the voice and the body performer can be sure they’re in sync to make it look nice and effortless,” Hoffert said.

Hoffert has plenty of support from a crew of Croswell veterans, including music director Jonathan Sills, choreographer Jessica Adams and set designer Doug Miller. The main actors, including Mikey Del Vecchio as the wimpy lead Seymour and Jamie Lynn Buechele as his crush Audrey (the original), were cast after a group audition for all four of the Croswell’s summer shows.

“We could have done this show with multiple iterations [of the actors]. A lot of good people came out. It was sad not to be able to cast more, because it’s not a huge ensemble show,” Hoffert said, adding, “Nobody in that room made my choices easy. But in the end I think we got people who compliment each other well and work well together. We’re having a really good time so far.”

Don’t Feed the Plants
Though there’s certainly a moral to be taken from this darkly funny story of a man and his carnivorous plant, Hoffert said above all he hopes that audiences will come away entertained by this production.

“This could be considered a Greek tragedy, if you will— be careful what you wish for, you might just get it. But in the end, because this is a well-known show, I want them to be entertained. I want them to possibly see some things in this production that maybe they haven’t seen before,” Hoffert said.

“Going to the theater is a great escape. And I think Little Shop is one of those shows that provides that escape for people.”