Like various other venues, the Village Players Theater on Upton Ave. shut down productions and figured out how to survive over quarantine. The past 18 months of preparations have ensured it could open back up without missing a beat. Now the Village Players will come back with the show they were working on pre-COVID: Neil Simon’s classic vaudevillian-focused play The Sunshine Boys.

The play is being directed by Barbara Barkan, who is also the President on the Board of Directors for The Village Players. She has been getting the theater up and running, and is excited to bring theater back to Toledo.

Decades of history
The Village Players Theater got its start back in the 50s, with a group of Ottawa Hills theater lovers who put on productions in a tent. In the 60s a former church on Upton Avenue became renovated into the current Village Players Theater. Now the theater is kept alive by the volunteers who run it. Though they had been closed the past year, things were still happening during quarantine.

“The board was actively meeting and planning,” explained Barkan. “We needed to make some revisions, look at programming, and address by-laws and our mission statement. We focused on revitalizing and renewing the theater: a rebirth, if you will.” 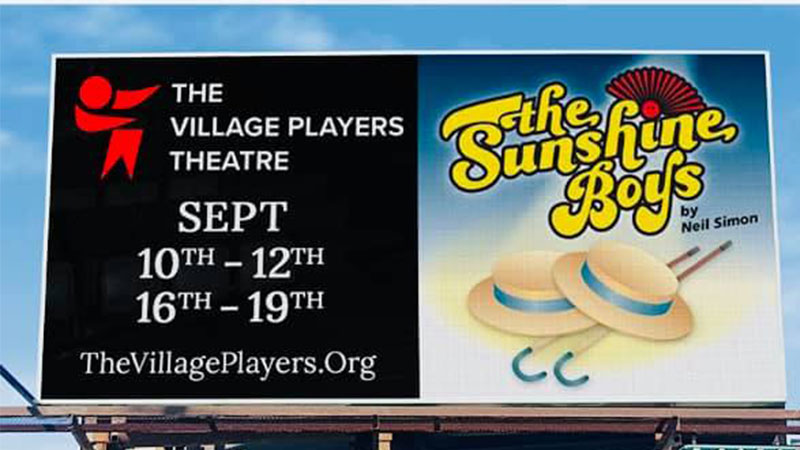 That revitalization will be put on display when the theater opens their doors on September 10 to put on The Sunshine Boys. Originally, the Village Players Theater was planning on running the play in 2020, so it makes sense for them to get it back on its feet while the theater itself did the same. “(It’s) a carry-over from the season that almost was,” Barkan said. “It’s perfect in its message and delivery.”

A tribute to the past
The Sunshine Boys was written by the legendary Neil Simon in tribute to the old vaudeville comedians he was inspired by. The play portrays two former vaudevillian comedians named Willie Clark and Al Lewis. After more than 40 years in the business, animosity between Lewis and Clark caused them to break up.

Years later, the older and (mostly not) wiser Lewis and Clark are compelled to reunite for a retrospective comedy show. The play tells the tales of these two former friends and coworkers who must put aside their differences to ensure the show goes on, which it must. “It’s a bawdy, sassy, funny show. A classic,” Barkan said. What better way is there to get back into theater than having a hilariously good time?