The Toledo Rep’s annual performance of A Christmas Carol is right around the corner, with almost 100 actors taking The Valentine Theatre’s main stage for one weekend only. In anticipation, The City Paper became the ghost of Christmas theatre to take a peek inside some of the main actor’s past and present experiences working with “A Christmas Carol.”

Are you excited?
Yes I really am. I was in “A Christmas Carol” last year as a parade boy and this is my first time as Tiny Tim. I’ve wanted to be Tiny Tim for a really long time and my class is doing a field trip to one of my shows. The whole fourth, fifth and seventh grades are going!

What do you really enjoy about acting?
I really enjoy being up on stage and a lot of people seeing what I can do. I sing and dance and it’s a lot of fun. I’m only 9 and when I started acting I was 4 years old. I’ve been in 9 shows. In the summer I was Chip in Beauty and the Beast.

What’s your favorite aspect of Tiny Tim?
Well, it looked like the person who was Tiny Tim last year was having a lot of fun. I liked how he did his hobbling with his crutch; it looked like a lot of fun to do that. It’s fun to say some of the lines too, my favorite line as Tiny Tim would probably be, “Mr. Scrooge, Mr. Scrooge! Won’t you come for dinner? We have a goose, ya know!” 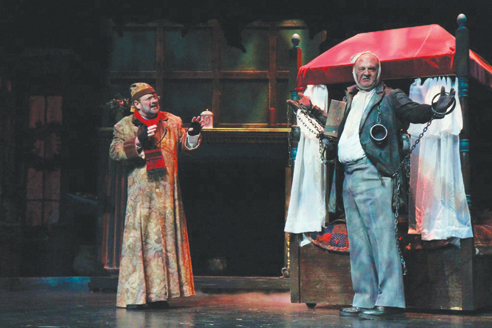 Actor Profile: Ebenezer Scrooge—Paul Causman
Native of Akron, Toledo
denizen since 1986.
Professional actor since 1981.
Artistic Director of The Rep from 1986-91. Directed A Christmas Carol in 1986. Eleventh year as Ebenezer Scrooge.

What is different this time around?

JA: This is my eighth year playing Marley and I try to do something a little bit different every year. I’m going for a softer side, a lot more remorseful. We played him angrier and sort of scary last year and I found some softer notes
this year.

How has your approach to the character changed in the last year?

PC: Well, this is my 11th year playing Scrooge. Every year goes by and you’re a little bit older and you come to the rehearsal process with a whole new set of life experiences and as a result, you end up having new perspectives on the dialogue. So every year it feels very fresh because of that.

What is the most exciting aspect of your role?

What is your favorite part of the show?

JA:  My favorite part of the show is the holiday tradition around “A Christmas Carol.” This will be the second year that the cast adopts a family and gives them things for Christmas. Last year we adopted a single mother and this year, we did again. We also hold the cast party at my house and each member of the cast is asked to bring a canned good, which we then take to the food pantry to give back to the community.

PC: I love being able to see the actors and crew from year to year—it’s like family and it’s wonderful. We have kids who’ve started with us very young and are grown up, but still with the production and it really is like a family. Scrooge goes through a huge transformation throughout the play, so every night it’s like a huge roller coaster ride.

I think we’re all very much familiar with the villainy of Scrooge, but I think sometimes people overlook his endearing qualities—what would you say those are?

PC: I love to play villains, because they’re usually so rich in comparison to the good guys. Scrooge isn’t setting out with the idea he’s going to be mean; you have to find out why Scrooge is the way he is. I think that Scrooge is a survivor.