It would be difficult to find someone who hasn’t at least heard of “Mamma Mia.” The 1999 musical, featuring the music of Swedish pop group ABBA, has been a phenomenon, with productions all over the world and a hit 2008 film adaptation, which has a sequel, “Here We Go Again,” coming out later this summer.
A new production of “Mamma Mia”, coming to the Croswell Opera House in Adrian, MI, beginning June 15, according to Director Jen Letherer, will capture the joyous enthusiasm the show is known for.
“It’s a fun show with music, you can’t stop singing,” Letherer said. “I really hope audiences sing along through the entire show— although they’ll want to stop and listen, because we have some really amazing voices onstage!”

One of those amazing voices belongs to young, Western Michigan University graduate Lindsay Powers, playing the lead role of Sophie. Powers first discovered the play after seeing the movie with her father, who was unimpressed. “My dad said it was the most horrible thing he had ever seen,” Powers said with a laugh. “And I said, ‘Eh, I bet you the show’s better.’
“I was living in Kalamazoo at the time and the show came through Miller Auditorium. I got a ticket by myself— I didn’t take anybody with me— and I sat between two older ladies who had seen the show before. I had the best time in a show, ever. I think it’s the best theatrical experience I’ve ever had. And then I said, ‘I have to do this show!’”
Powers got her chance when auditions for Croswell’s production— part of its Broadway Series— were held this past March. “Sophie and I are very similar characters. We both have great relationships with our mom, and we both have this big zest for life,” Powers said.
“The actors are a constant delight,” Letherer said. “It’s proof of how much people love this show. The leads showed up with the music down pat, with a great understanding already of what their roles would require, and they have continued to work non-stop.” 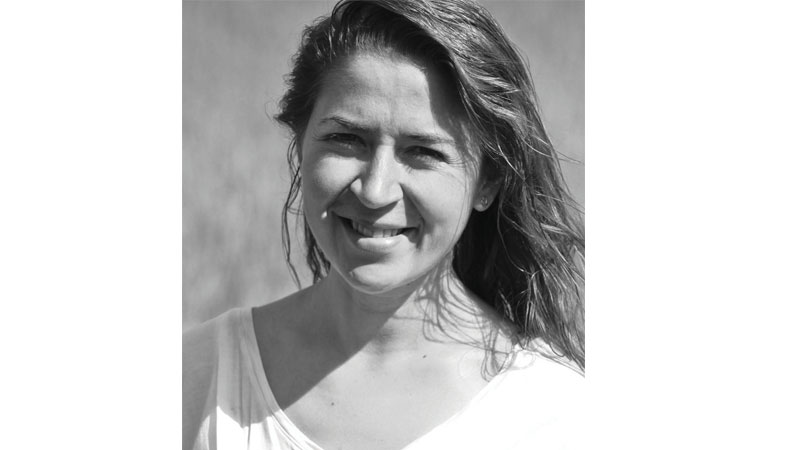 Director Jen Letherer said the music of ABBA is key to the show’s staying power. “The show doesn’t ask you to think really hard or really deeply, yet it touches something deep and real about what we feel or want to feel. “ Photo credit: Kimberlee Poole

Take a chance on me

The production is trying to give its audience the feeling of taking a holiday in Greece, to match the show’s beautiful setting. The setting and locales are designed to feel realistic but, with a little lighting change, can also strike a fanciful tone.
“I think of the ensemble as a kind of, you’ll forgive the pun, Greek chorus. They’re reflecting back what’s happening in the principal’s lives. So realistic, yes, but musical theater realistic. The emotions are always truthful,” Letherer said.
At its core, though, what makes “Mamma Mia” is the music— those enduring ABBA tunes that have remained popular for over four decades now. “There’s such emotional truth in it— and it’s so dang catchy. I think it’s also important because it’s one of a few shows with two female leads and more female supporting characters. So there’s a lot of appeal. It’s just a really fun show,” Letherer enthused.
“I hope [the audience] leaves, having had a good time, having escaped for two-and-a-half hours and in a better state of life than when they came into that theater,” Powers added.