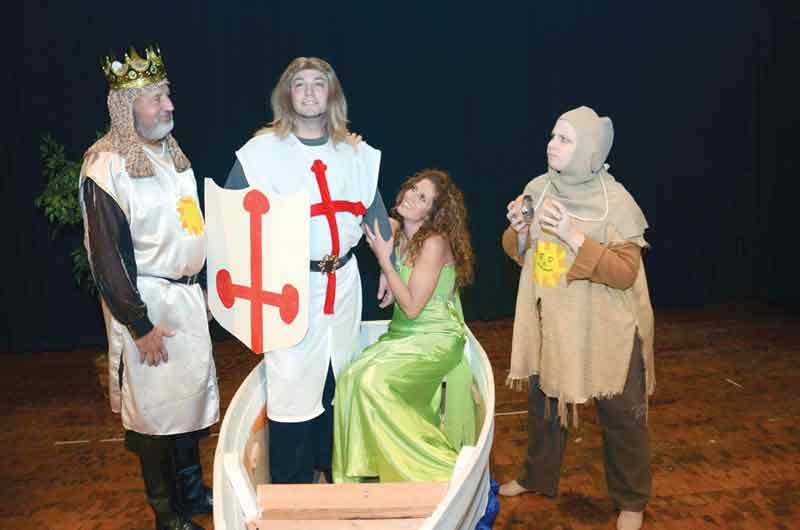 The comedic genius of Monty Python has been showcased on television and in the movies since the 1970s. Most recently, their humorous antics have come to the stage with Spamalot. This slapstick comedy will be the season opener for the Oregon Community Theatre. With catchy songs, memorable quotes, and classic Monty Python jokes, this show is sure to be a hit.

Spamalot, created by Eric Idle of Monty Python, first opened on Broadway in 2005 where it quickly found the same popularity as its inspiration, Monty Python and the Holy Grail, running for 1,575 performances and winning numerous Tony awards, including Best Musical. The talented cast included Tim Curry and David Hyde Pierce.

The story begins when King Arthur is told by the voice of God that he and a team of Knights must unite in Camelot for a special adventure. Their job is to find the missing Holy Grail, or as one knight candidly points out, “God, the almighty and all-knowing, has misplaced a cup?” King Arthur gathers an interesting group of men for the mission: Sir Robin the Brave, an extremely cowardly knight; Sir Lancelot, a fearless knight with a not-so-well-kept secret; Sir Galahad, also known as Dennis the mud-gatherer; Sir Bedevere, the scholar of the group; and Patsy, the servant and horse (complete with coconut clapping sound effects). This bizarre-but-loveable group is cheered on throughout their travels by the strong and mystical Lady of the Lake and her Laker girls.

Though Spamalot is originally based on Monty Python, it has a great deal of new material. According to Bill Quinlan, director of Oregon’s production, “the show is about half-film and half the vision of Eric Idle and his theatrical creative team… True Python fans still have their favorite sketches left from the movie, but will be pleasantly surprised with the new, revised scenes which amount to the only new truly Python material in decades.”