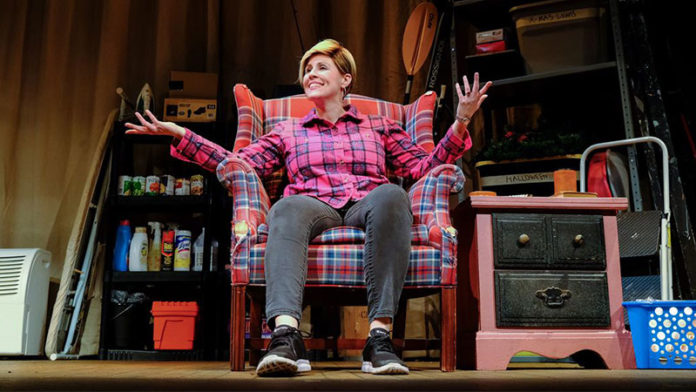 Many recall the visual images when New York’s Broadway district went dark in March 2020. Literally dark. The empty streets and unlit marquees were a symbol of what the pandemic took from us all.

While not as visually dramatic, the pandemic had the same effect on Toledo theatre. March 13, 2020 was scheduled to be the opening night of Bedroom Farce at the Village Players Theatre. A year later, the tickets are still sold, the sets are still ready, and the theatre is still dark. What’s happened in the ensuing year is a combination of reassessment, trial-and-error, collaboration and commitment.  “It’s been very difficult,” said the Village Players’ Barbara Barkan. “We’ve been held hostage by COVID, and we are having to re-invent ourselves.”

Changing Perspectives
The pandemic forced theatre in the Toledo area to make a serious pivot. Ultimately, according to Matt Foss, Associate Professor of Theatre at the University of Toledo, they had to learn “what makes theatre special, and what can we do to translate that for new audiences?”

UT has translated productions into online performances. Foss created Faithful Friends: An Adaptation of the Two Gentlemen of Verona for performance live last year at area elementary schools. Instead, the production was performed online for students, complete with accompanying workshops.  “The pandemic allowed us to innovate,” Foss explained. Last fall’s production of a contemporary 20K Leagues Under the Sea was recorded by students and faculty from the university’s Department of Communications, and live streamed. It won an award at this year’s Kennedy Center American College Theater Festival.

The Actors Collaborative Toledo (ACT) began moving online right away. “We performed online monologues with actors across the country,” said Jeffrey Albright, co-founder and board president. ACT’s live performance home base, Trinity Episcopal Church in downtown Toledo, has been closed since March 2020.  And ACT collaborated with the Toledo Repertory Theatre to develop performances last fall and earlier this year. “We worked with limited audiences and actors, and garnered a fair amount of interest,” Albright said.

And while “traditional” theatres such as the Toledo Rep have moved towards smaller and outdoor performances, it’s been more difficult at the Village Players theatre. “It’s a huge undertaking for us to move a production outside, so we couldn’t produce some of the things we wanted to,” Barkan said. “People need to feel comfortable coming together again, and our mission is to do the things that are safer for the audience.”

Adapting as Restrictions Change
UT will continue showcasing student productions this fall, including a series of highly produced short plays that will be presented in a “vibrant theatrical potluck,” said Foss, adding that the plan for the Theatre Department is to “slowly start matriculating to a more normal schedule. And maybe add a musical.”

Albright plans to get ACT back to “semi-normal” in the fall, with reliance on collaborative experiences and modifying the nature of performances (fewer cast members and with smaller audiences). “Live streaming will be with us into the future,” he said, because “it also allows people who may have difficulty getting out to see theatre.” In the meantime, several live performances are planned:

The Village Players will be on the road too, bringing back Bedroom Farce and The Sunshine Boys (with an “exciting new twist,” according to Barkan) in September. “We’ve had to look at how we invite people in, how we package the experience, and what type of experiences we’ll be offering,” she said.