Rockets vs. COVID-19: How UT and the MAC Plan to Play the Game During the Pandemic 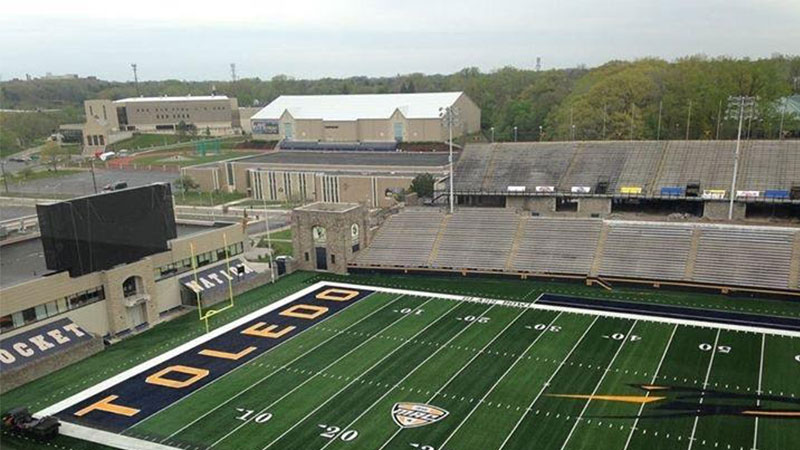 MACtion is back this year for the Mid-American Conference (MAC) and for the Toledo Rockets. Following a spring and summer of uncertainty and worries, MAC officials agreed to kick off the 2020 season amid the COVID-19 pandemic, reversing a previous decision to push the fall season to spring. Schools have begun a shortened, six game, conference-only schedule.

The first three games will be played on Wednesday evenings and the final three games will be played on Saturdays, with the MAC Championship Game set for mid December at Ford Field in Detroit. Schools must also need to play at least three of the six games to be eligible. If any of the games are canceled due to COVID-19, it is unclear if that will affect a team’s bowl eligibility.

Safety is a Priority
To ensure a safe season over the next several months, Dr. Roger Kruse, UT Rockets’ team physician, and other medical professionals, worked to devise protocols for all schools within the conference. Together, they presented a plan to MAC leaders that included frequent testing and strict rules.

Since October 5, players have each taken four antigen COVID-19 tests each week. Any player that receives a positive result will need confirmation with a more advanced test. After a confirmation of the positive result from the more advanced test, players must enter a cardiac screening protocol and isolate for 10 days before receiving clearance to play.

“We’re trying to find that sweet spot of keeping everybody safe and doing the right thing while also creating the opportunity for the student athletes to do what they like to do … compete,” says Paul Helgren, UT associate athletic director. “There’s a lot going on, but I’d like to extend huge kudos to Dr. Kruse for helping getting everything situated so we have football this season.”

To further limit the spread of the virus, conference leaders voted against allowing the general public to attend the games. For the Rockets, family members of players and coaches of both teams, band members and the Blue Crew will be the only observers allowed in the Glass Bowl. These stringent restrictions are estimated to create a six to seven million dollar revenue loss for the University. 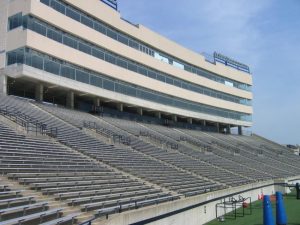 What About the Fans?
Last year, the Glass Bowl welcomed an average of 20,399 fans per game, but without the fans, home field advantage virtually disappears.

“Whenever I’m on campus, there’s just something about game day.  I’ll just miss the positivity and energy around every football game during the season,” explains Mark Schindler,UT student. “I think it’s the right move to not admit fans. It’s a tough choice and it’s not ideal, but I really don’t think anything in 2020 is ideal.”

The University of Toledo offers fans a way to demonstrate Rocket pride while staying safe by purchasing a cut-out of yourself, or your pet, wearing your favorite Rockets attire, to be placed in the stands. Profits from the cut-out purchases will benefit campus initiatives such as virtual tutoring, on-campus hand sanitization stations and assistance with digital course books and learning resources. Purchase your Rocket-spirit cutout by clicking here.

Assistant AD Helgren says, “We’re just happy to be playing … we’re making the best of it and everybody is making sacrifices to keep our student athletes and coaches safe.”

Click here to see the full schedule of games.