Earlier this month, the state of Ohio announced it will no longer support plans for the Cullen Park and Grassy Island restoration project– one that the state hoped would reduce harmful algal blooms and water quality in Lake Erie.

“The idea here is to create wetlands to naturally capture phosphorous and other harmful nutrients before it gets out into the bay and feeds algal blooms,” said Joe Cappel, vice president of business development for the Toledo–Lucas County Port Authority.

The point of focus for the two projects was in the bay of Cullen Park, located in Point Place, and the Grassy Islands, which is located northeast of the Harbor-View Yacht Club in Oregon, OH. 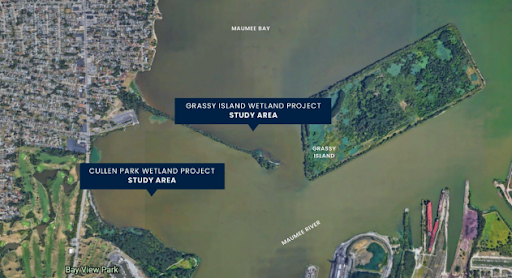 “These two projects would’ve created wetlands that would’ve acted as kidneys for the two locations,” said Cappel. “The water would flow through the wetlands and the wetlands would then filter out harmful toxins so cleaner water would return to Lake Erie.”

Budget Concerns
In 2019, the Ohio Department of Natural Resources (ODNR) granted $4.8 million of its H2Ohio funding to the Toledo Lucas County Port Authority to support the design, engineering and construction costs of the Cullen Park wetland. A supplemental $700,000 was also allocated for the study and design, accounting for 10% of ODNR’s 2020 H2Ohio budget.

Over time, however, those numbers continued to rise. By this year, the plan ended up more than doubling the original price tag, something the state could no longer afford. Joe stressed that with the lingering effects of the pandemic, such as the rising cost of lumber and labor shortages, the engineers were forced to adapt. They ultimately laid out a smaller plan that simply didn’t satisfy the needs of the projects which forced the state to reconsider.

Opposition from Local Residents
Even before cost began to rise, people who lived in Point Place were never shy of voicing their disapproval of the state’s plans. “The Point Place/Shoreland community is very strong and has shown how we come together to protect the waterways we value and enjoy so much, ” said Karen Mayfield, Point Place resident.

“The western end of the Maumee Bay is primarily used for recreation, and contrary to what the project promised, phosphorous and pollutants will lead to increases in algal blooms right where people are,” she added.

Karen is one of nearly 900 other members of the Stop the Swamp Facebook page for residents to learn about the projects, share updates and voice their concerns. The page includes a PowerPoint presentation that references increased mosquitoes and costly yearly maintenance as a result of the projects.

An online petition was also created to send to the City of Toledo, Toledo Lucas County Port Authority and the Ohio Department of Natural Resources. At last check, the petition had nearly 1,400 signatures.

Future Plans
As of now, plans to revisit the Cullen Park and Grassy Island project remain cloudy. “I think it all depends on what other projects there are and the available resources,” said Cappel. “The good news is the designs are approved so eventually somebody could pick up these projects and move forward,” he adds.

“We won’t hesitate to reach out to make sure H2Ohio guidelines are met and any proposed project would truly benefit and enhance the area,” said Karen. 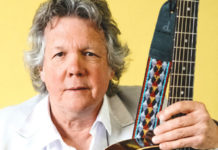 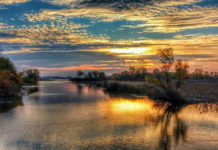