Toledo According To DeShawn Willis 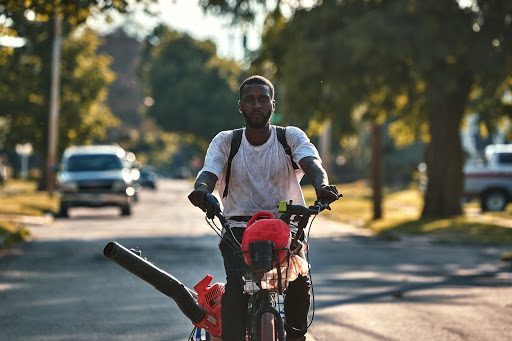 DeShawn Willis is proof that it matters where you make it.

A lifelong resident of Toledo, DeShawn has been cutting grass for area residents for seven years. The quality of his work and tireless commitment to getting the job done resulted in his client base growing enough that he incorporated Lake Lawn two years ago. It may not be glamorous, but it is honest work— and it pays the bills.

Things took a turn, however, when DeShawn’s van broke down. Without a vehicle to transport his equipment and lacking the funds for a new van, he improvised a by strapping his lawnmower, leaf blower, and other accessories to the back of his bicycle. It was not pretty, but it got him where he needed to go— and though it took him extra time and elbow grease, he still got his client’s work done.

Not long after, DeShawn found himself to be the subject of a viral Facebook photo. Captioned “Only in Toledo,” the image showed him carrying his equipment on a bike down a major street, mocking the fact that he lacked a vehicle. But not everyone who saw the photo laughed; some found it inspiring. One of those people was New York-based videographer Dan Lior.

Dan got in touch with DeShawn and offered to make a video for him. A storytelling masterpiece features DeShawn describing his experiences, perspective, and struggle against the odds of making an honest living. That video, posted on Vimeo on July 21, has now been seen over 184,000 times and has become a Vimeo Staff Pick. It quickly went viral, attracting more shares and reactions than the image mocking him.

At the end of the video, viewers are linked to a GoFundMe page— accessible at www.onlyintoledo.com— that sought to raise $53,000 to help DeShawn buy a new pick-up truck, trailer, and equipment. That goal has already been met and exceeded, reaching over $67,000 as of August 4. When asked how he felt about the success of the fundraiser, he remarked, “I felt like I was dreaming, that I needed to wake myself up. I had no idea that we would have exceeded the goal.”

Money hasn’t been the only thing to come his way; many area residents, impressed by his work ethic, have reached out seeking to hire Lake Lawns. “Business is picking up, and one of my short-term career goals is to form a successful crew and go from there,” said DeShawn.

It’s no secret that it can be hard to get by in Toledo. A 2019 study by the Jack Ford Urban Affairs Center at the University of Toledo reported that 26.5% of our residents live in poverty. Many people do what they can to make ends meet, often facing uphill battles with transportation, childcare, housing, and unequal wages. As this campaign has shown, our community always rewards hard work and takes care of its own.

As for DeShawn— he’s looking toward the future. “Ten to twenty years from now, I’d like to be in a position where I’m getting other young guys who are in a similar situation as I am an opportunity, whether through my business or what other resources I may have acquired. I want to be able to hire people and help people out who can’t find jobs and might be coming from a situation where they may not be able to find work. Targeting my community and helping out people from my community.”

Years lived in Toledo: All 33 years of my life.

My story, in one sentence: Young Toledo man creates his path to success from the ground up.

What I’m doing, and what I want to achieve: I’m building my future in lawn care and hope to expand into a full-blown landscaping company.

If I could change one thing about Toledo: the lack of creativity, no one thinks outside the box.

If I knew I could get away with it, I would: I would drive a new Dodge Charger right off the lot without paying.