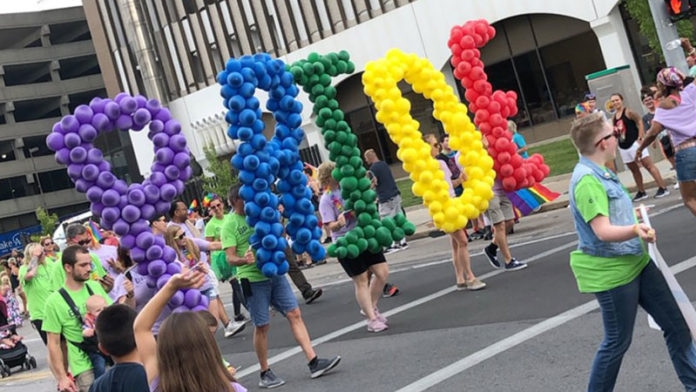 Pride is back. For real and in a big way.

The last time Toledo Pride hosted a three-day event was in 2019. The celebration had to adapt in the intervening years— in 2020 with a simulcast event shown at local restaurants, a socially distanced film screening at the Sundance Kid Drive-In, while 2021 saw another muted celebration with a ticketed event in Promenade Park along with the Big Rainbow Brunch Crawl. This year, the Pride celebration in downtown Toledo from August 19 21 will be back at 2019 levels.

“We are planning on a full event, for sure,” said Lexi Heyman-Staples, Toledo Pride executive director. “With all the bells and whistles, like before COVID. . . . We’re pretty pumped to feel more confident, to be back to normal.”

Kick-Off Event
Three days of festivities begin with the Kick-Off, “You Will Do Better in Drag,” at Promenade Park on Friday, August 19, featuring a slew of performers including Caly Bevier, seen on America’s Got Talent,
local band goLab and alt/pop duo Klashing Black.

“We partner with Northwest Ohio Community Shares to help us with some volunteers, and we work with a lot of local entertainers to help us put on a kick ass kickoff to Pride,” Heyman-Staples explained.

This year’s event is free and open to the public.

Pride Parade
Saturday, August 20, the Pride Parade begins at noon at Promenade
Park with floats, groups and more stepping off on the parade route along Adams Street in a showcase and celebration of the area’s LGBTQIA+ community.

Main Event
As the parade wraps up around 1pm, Pride’s Main Event takes to the Promenade Park stage for performances that run through 10pm.

“Arctic Clam kicks off the day followed by other awesome local bands throughout the day,” Heyman-Staples said.

Drag performers, belly dancers, food trucks and several MCs with over 100 vendors. Imagination Station joins the celebration this year, allowing the festivities to spread from Promenade Park to Festival Park. Pride is also working to make the event more accessible for individuals with hearing disabilities. “We will be expanding our ASL presence and our access for people who are ASL fluent. The deaf community is an important part of our population.”

Pride All Year
Going forward, Toledo Pride organizers plan to expand the event beyond a few days in the summer. In June, a Rainbow Family Party at Glass City Metropark had more than 1,000 people attend, and Heyman-Staples hopes to host more events throughout the year. “I just want to enhance that sense of community that we’ve all been longing for,” Heyman-Staples said.

For the latest information on Toledo Pride 2022, visit toledopride.com.