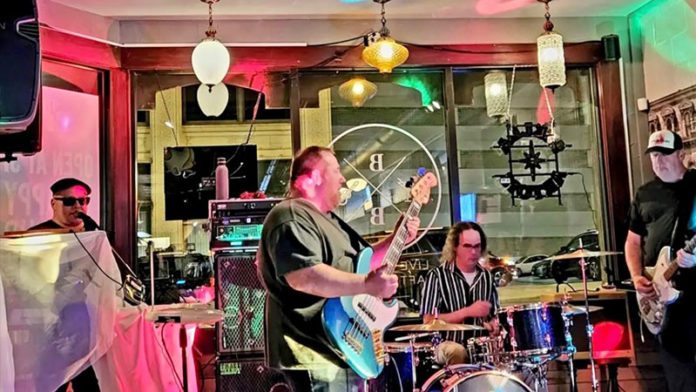 Live music is back in venues around Toledo, with a variety of different acts. Local psychedelic band Robot Mama is excited to show you what they can do. Mixing visual art with their music, a live Robot Mama performance is unlike any other.

Performing together since 2018 and working together in anticipation of playing live again, fans are seeing them in person once more— they performed at the Agnes Reynolds Jackson Arboretum for the Old West End Festival.

Finding The Funk
The band consists of Paul Matthews on synth and vocals, Kevin Haberkamp on guitar, Chris Rees on drums and Jason Okonski on bass. Matthews has been in various bands for years: “I’ve been playing since I was 15, and I’m 50 now. Plus Kevin and I have played in a band before.”

With those years of experience Matthews and Robot Mama look to put on a unique show. “We have some songs that last about two minutes, and others that are twenty minutes long,” Matthews said. “Plus we have a whole light show that goes with our performance. When we started the band we knew we wanted art to be a part of our performances.

“We’re not like a traditional bar band,” he added. “Because of that we tend to put on our own shows.”

According to Matthews, Robot Mama sounds like “if Echo And The Bunnymen, The Minutemen, and Jane’s Addiction had a child”— psychedelic tunes with a punk edge and 80s synth mixed in.

Live Robot
Robot Mama only performs a few times a year, but “it’s a lot for us” because of the complexity of the show, said Matthews. The show at the Old West End Festival was a return to an old favorite for the band. Matthews and Haberkamp have performed at the Festival in the past, and they were happy to perform again this year. “Kevin and I would just show up and ask Festival organizers ‘Can we play?’”

“We played on a house porch in 2019. We were excited to play at the arboretum this year due to the volume of people that go there. We think Robot Mama is a great fit for the event.”

In addition to their live performances, later this year Robot Mama also looks to release an album.

“We’ve been putting together our album over the pandemic, recording a bunch of songs and fine-tuning them at Stone Soup Recording Studio. Our performance there in February (available on Facebook) was just great, and it’s the best way to check us out if you’re interested.”

Find out where to see Robot Mama performing next at facebook.com/mamas2020.