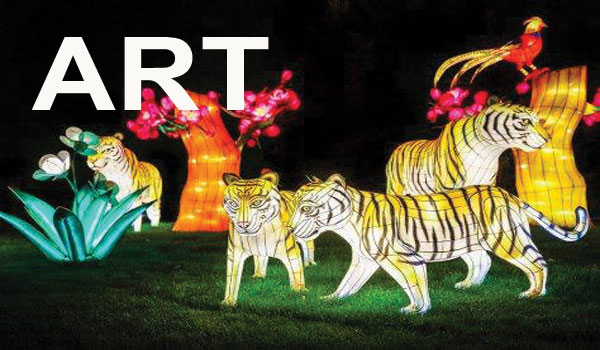 1. Over 500 Chinese lanterns will illuminate the Toledo Zoo, from September 29-October 29, during Luminous Nights. Animal and botanical-shaped lanterns placed throughout the grounds will tell narratives, and large lanterns, standing 19 feet tall and 50 feet long, will light up your evening.
2. Afghan-American artist Aman Mojadidi will bring three phone booths from New York City’s TImes Square to Promenade Park in downtown Toledo, Toledo Lucas County Public Library and on the University of Toledo campus, as part of his interactive public art installation Once Upon a Place. Pick up the phone and hear stories of immigrants from September 15-October 22.
3. Get your holiday shopping done early— and buy a little something for yourself— during Toledo’s favorite DIY indie craft fair. Maker’s Mart: Holiday Edition sets up with hundreds of area crafters Saturday, November 11.
4. Satisfy your creative cravings twice a month during the 3rd Thursday Art Loops in downtown Toledo and the First Friday Art Walks in the Red Bird Arts District of downtown Sylvania. Monthly themes give each events a new, fresh focus. See what’s up next at redbirdarts.org and theartscommission.org
5.  Travelling artists will stop in Toledo throughout the fall at the American Frame Showroom. Catch the Ontario-based painter Leah Williams exhibit Light and Color, on display with Toledo photographer Dr. William Horvath’s Colors and Cultures of the Yucatan exhibit, October 4-31. During the month of November, online art instructor and painter Tim Gagnon will visit from Maine for a solo exhibit. Finally, see works by the shop and gallery’s employees during an Employee Show, December 1-296. The Toledo Botanical Garden has transformed October 29 with A Garden of Wonders: Stone Sculptures of Zimbabwe. See more than 100 of these gorgeous pieces from Zimbabwean artists throughout the 66-acre campus, with many works for sale.
7. TMA exhibits. Currently on view: Drawn from Classicism: Modern Artists’ Books (through Dec. 10) and Fired Up: Contemporary Glass by Women Artists (through March 18). On Nov. 18, view Late Roman masterpieces during Glorious Splendor: Treasures of Early Christian Art (through Feb. 18).

8. Spoken dialogue added new dimensions to cinema, but there’s certainly room for silent pictures. The TMA pays homage to some of the classics of the silent film era with The Sounds of Silents, frequently accompanied by a live soundtrack via musicians or the in-house Skinner organ. Upcoming films include The Dumb Girl of Portici (Sept. 14), The Phantom of the Opera (Oct. 19), Der Golem: How He Came into the World (Oct. 26).
9. I Am Not Your Negro Centered on author James Baldwin’s unfinished memoir about the lives and assassinations of his civil rights leader friends, Raoul Peck’s hit documentary I Am Not Your Negro (Nov. 17) envisions the finished manuscript. Free at the TMA.
10. Add some diversity and culture to your film knowledge with the TMA’s Art House Film Series. Selecting films that are visually striking, culturally important and emotionally powerful, the TMA seeks to present these cinematic masterpieces in a way that emphasizes a visiting or permanent installation or exhibit. The Mystery of Picasso (Sept. 22), Kara Walker: Short Films and Interviews (Oct. 13, 21), Birth of a Movement and DJ Spooky’s Rebirth of a Nation (Oct. 14), Andrei Rublev (Dec. 15). Visiting scholar James Kendrick offers a lecture at the TMA on Steven Spielberg’s films before the screening of Close Encounters of the Third Kind (Nov. 16), one of the legendary director’s most popular epics on its 40th anniversary.
11. Don’t sit at home on Friday nights, head over to the University of Toledo for their Fridays on Film series and check out $10 screenings of some of the best, and least, known cinematic treasures, curated by the UT Department of Theater and Film. Upcoming films: The Bride of Frankenstein (Oct. 27), The Sugarland Express (Nov. 17), The Cabinet of Dr. Caligari (Dec. 1), Floating Weeds (Jan. 26), Casablanca (Feb. 16).
12. The Valentine Theater brings beloved films back to the big screen with their Silver Screen Classics series. Screenings include popcorn and there is a cash bar, so you don’t need to sneak your own stuff in. Upcoming films: The Shining (Oct. 27), Singing in the Rain (Nov. 10), War of the Worlds (Jan. 5), North By Northwest (Jan. 12), Mr. Smith Goes to Washington (Feb. 9), Gone with the Wind (Feb. 16). 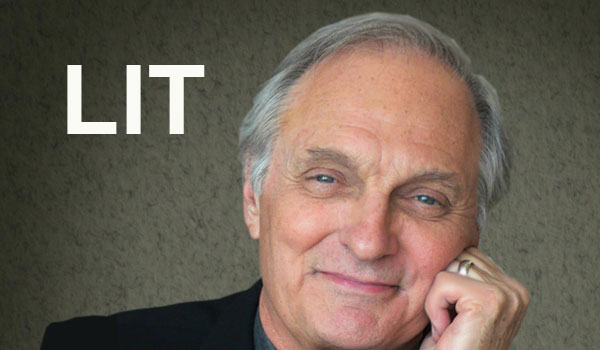 13. The Toledo Lucas County Public Library teams up with The Blade to bring world renowned authors to Toledo to relate their experiences for the Authors! Authors! series. Upcoming speakers include Alan Alda (Oct. 5), Wil Haygood (Nov. 1), W. Kamau Bell (Nov. 16).
14. Finding a good open mic night in Toledo is never a problem with Toledopoet.com’s and their calendar of monthly events. BREW and Black Kite Coffee offer regular Wednesday night readings, while the Greenleaf Vegetarian Cafe has weekly open mics on Mondays and the Sofia Quintero Art and Cultural Center has a weekly potluck and open mic on Tuesdays.
15. The spotlight is on Jack Kerouac at Back to Jack night, an open mic with a fun twist at the Art & Performance Center of West Toledo (2702 W. Sylvania Ave.) Pick a poem, monologue, or piece of prose written by the voice of the Beat Generation and sign up to perform your favorite words in front of fellow fans.

16. Get up close and personal with your favorite local musicians with the Up Close Concerts series. Weekly concerts are hosted at Music Go Round or the Art and Performance Center of Toledo. Learn more at facebook.com/upcloseconcerts419
17. Fans of The Beach Boys will swoon for Brian Wilson’s performance of Pet Sounds. The full album will be played by the music legend and former bandmates Al Jardine and Blondie Chaplin, Wednesday, October 4.
18. Janet Jackson brings her State of the World Tour to the Huntington Center on Saturday, October 28.
19. The Toledo Symphony Orchestra has entertained Toledoans since 1942. Join in and enjoy the community-supported organization during these upcoming events: Beethoven’s Eroica (September 29-30), Mozart’s Concertos (performed throughout the season), their annual Halloween Spooktacular (October 29), Mozart and Dvorak (November 5), and more. For the full schedule, see toledosymphony.com
20. Singer-songwriter Ray LaMontagne will bring his folksy-blues sound to the Stranahan Theater on Friday, November 3.
21. See The Planets in HD as the Toledo Symphony Orchestra performs two heavenly poems— Ligeti’s Atmosphères and Strauss’s Also Sprach Zarathustra— at TMA’s Peristyle. Two large screens will offer a glimpse of the galaxy, providing an immersive experience. (February 2-3). 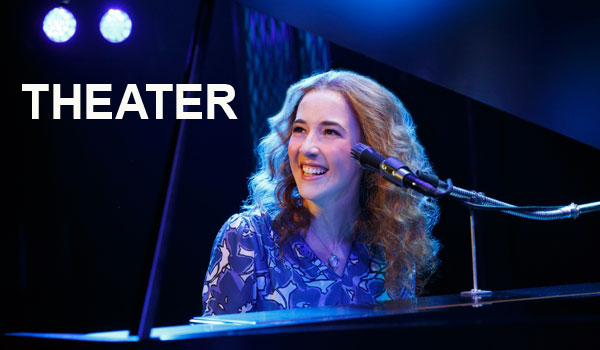 22. The Stranahan Theater’s Broadway in Toledo series brings the uproarious musical A Gentleman’s Guide to Love & Murder (Nov. 9-12) and the story of how a chart-topping music legend found her own during Beautiful: The Carole King Musical (Feb. 6-11).
23. Want to dress up fancy and support sophisticated pursuits? The Toledo Opera’s 2017-2018 season includes four opportunities: French composer Georg Bizet’s moving, beautiful The Pearl Fishers will take audiences to Sri Lanka (Oct. 13 &15); Giuseppe Verdi’s tragic Rigoletto returns to the Toledo stage after ten years (Jan. 26 & 28); and the modern, R&B-inspired I Dream by Douglas Tappin tells the story of Dr. Martin Luther King Jr. (April 7 & 8).
24. The Toledo Repertoire Theatre offers a robust schedule of stage plays through June. Upcoming highlights include: a radio show brought to life during It Came From Mars (Oct. 13-29); the world premiere of local playwright Eric Pfeffinger’s contemporary comedy Human Error (Nov. 17-19), which won the 2016 Ohio Arts Council Award for Individual Excellence; Toledo’s 30-year holiday tradition, A Christmas Carol (Dec. 1-3); and a dangerous game of one-upmanship in the biting new comedy, Ripcord (Jan. 12-28).
25. Soak up some local talent in a black box theater at the Valentine Theatre Studio A. Find yourself scared as a ghost story come alive during The Woman in Black (Nov. 3-12). Get lost on romantic, historic journey of love and science during Silent Sky (Jan. 12-21).
26. Founded by Jeffrey Albright, Barbara Barkan and John DuVall, Actors Collaborative Toledo is a troupe of local theater legends that bring contemporary works to Toledo. Catch The Testament of Mary (Sept. 30), The Tricky Part (Oct. 13 & 31), Grounded (Oct. 14 & 20), Christmas with ACT (Dec. 9), The Realistic Joneses (Feb. 16 & 24), The Nether (Feb. 17-23), A Life (April 20-28), and Crumbs from the Table of Joy (June 1-10) in their 2017-2018 season.
27. Support The Village Players Theatre, one of Toledo’s oldest volunteer-run arts organizations, by attending their upcoming productions. See the humorous and compassionate story of three Vietnam war veterans during Pvt. Wars, first presented by the Players in 2001, (Oct. 7). Betrayal, a drama of affairs (Nov. 10-18) and Annapurna, a breathtaking story about the longevity of love (Jan. 19-27) offer other options.
28. The Valentine Theatre’s Broadway Series welcomes The Wizard of Oz (Nov. 7), Cabaret (Jan. 2), and A Chorus Line (Feb. 18).
29. Sylvania’s Tree City Playhouse is now accepting submissions for their 10-Minute Play Writing Competition through Oct. 5. See them perform On Golden Pond (Nov. 3-4) and It’s A Wonderful Life: A Live Radio Play (Dec. 8-9).
30. Toledo’s biggest celebrity, Jamie Farr, returns to star in this acclaimed stage production of the funny, profoundly heartwarming autobiographical story of Mitch Albom, Tuesdays with Morrie (Oct. 7) at the Stranahan Theater.