But algal blooms are not confined to Lake Erie, as the long-term health impact has long been a focus and concern of environmental scientists. The discovery of a link between blue-green algae— more accurately referred to as cyanobacteria— and diseases like ALS, Parkinson’s and Alzheimer’s was announced in a 2016 study. The process of establishing this link is the focus of the film Toxic Puzzle, to be screened on September 12 at the Toledo Museum of Art’s Peristyle.

“[Toledoans] know about the algae blooms of Lake Erie. And they may think of that as an annual, local thing, but it is actually a global thing. And our film is following the scientists that look at this around the world. And we’re trying to look at situations and what they can learn,” said Bo Landin, director of Toxic Puzzle.

“It is not a film about algae blooms in themselves. It is a film about scientists connecting serious illnesses to the blooms.”

For Landin, who has spent years as an environmental journalist and botanist, the production of Toxic Puzzle was a bit of a gamble. Having worked in newspapers and television production around the world, he often took interest in developing stories on environmental issues.

One day, his friend Dr. Paul Alan Cox— the scientist at the core of the cyanobacteria research— told him what he was currently working on.

“At the time, Alzheimer’s and Parkinson’s were not part of it, it was ALS. And I said, ‘Gee, Paul, this is a fantastic story. Someone needs to document it. We need to follow what you’re doing.’

“At that point, now about six years ago, there were no results. There [was] an inkling, an idea in his head that there was this connection. And I said, ‘We should document what you’re doing now around the world.’” 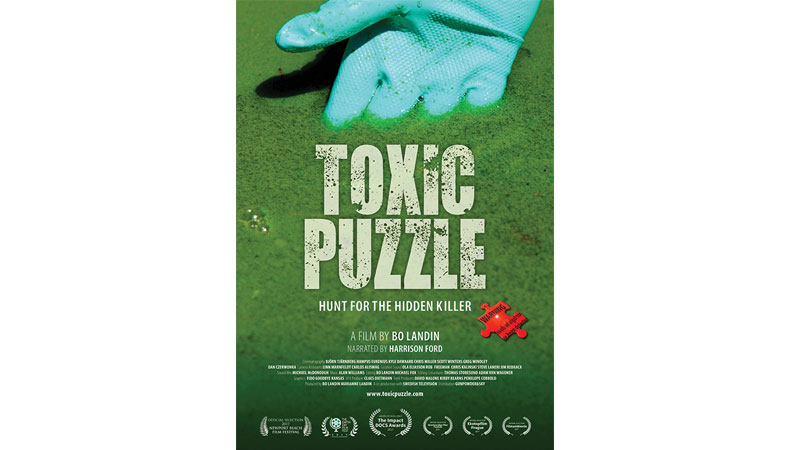 The only problem was, Cox was adamant that scientific procedure be observed— nothing could be released until he had published his results. That included any film footage that Landin would capture. Landin agreed, but that made pitching his film idea to miscellaneous production companies… difficult.

“I said, ‘I don’t know what the film is going to be about. I don’t have a budget. And I don’t know when I’m done. Do you want to be part of it?’ It is an impossible pitch.. . But I decided, with my wife Maryanne, to document this on our own.”

The end result is a fascinating film that documents a genuine scientific mystery, and the scientists who worked tirelessly to solve it. And though it took over five years for Cox’ study to be published — and thus even longer for Toxic Puzzle to come together— for Landin, the process was clearly worth it.

“It was a gamble from a journalistic point of view— it was a gamble that paid off. We could have ended up with 80 hours of interviews and material worth nothing at the end of the day. But obviously, there was a story that is really important to tell.”

‘Toxic Puzzle’ will be screened at 7pm
on Wednesday, September 12 at the Peristyle at the Toledo Museum of Art. The film will be followed by a Q&A session with both director Bo Landin and Dr. Paul Alan Cox. Admission is free. For more information,
visit toledomuseum.org.