Despite talent, ambition and drive, an undiscovered artist still starves for resources. It’s no secret that artistic creation comes with a cost— in terms of time, materials and supplies. And when the expense of a project competes with the means to survive, an artist may yearn for a rich uncle or a generous patron to avoid the choice between art and sustenance.

To even the odds, artistic visionaries with strained financial means find success with a little help from their friends. While privileged entrepreneurs born into wealth have relied on this adage since the Renaissance, the means to that end have changed— an online phenomenon and community support allow for your ‘friends’ to be strangers. They just need to like your idea.

Toledo knows all about community support. Here, collaboration is key to overcoming limited resources. Together, we roll up our sleeves, spit-shine our work boots, and do what it takes to turn concepts into examples of cooperation.

See where creative collaboration is taking us during Toledo’s newest celebration of cinema— the first annual Glass City Film Festival (GCFF). This full weekend of
international, independent films will begin with a familiar story of friendship and collaboration, during Toledo-native Jason Cooper’s documentary Kickstarted.

The Festival’s opening night reception will be a homecoming for Cooper, when Kickstarted, Jason’s documentary about online crowdfunding will be the sole feature screened that night.

“I think it’s a movie that will really appeal to the people of Toledo,” says Cooper. “Toledo’s a blue collar town, a self-starting town… creativity is in its DNA. I think the film could potentially inspire a few people to go out and launch their own crowdfunding campaign.”

The film is a joint effort of Cooper and his creative partner, Jay Armitage, whom Cooper met professionally while working at NBC with Armitage’s advertising agency. Cooper approached Armitage with the idea of documenting online crowdfunding platforms, like

Kickstarter, where creatives can easily pitch a project to potential donors with a time-limited window to secure funding.

“I heard some really interesting stories from people who have crowdfunded, and I thought it was a really ripe place. There are passionate people who are creating and funding their dreams [on websites like Kickstarter and Indiegogo], and it doesn’t always go as expected,” says Cooper. 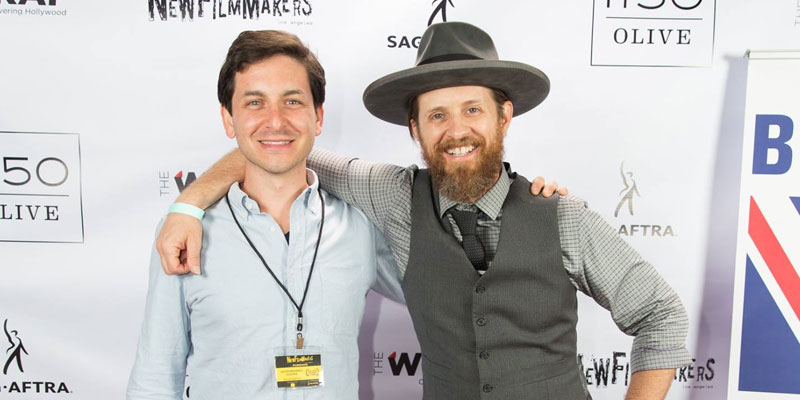 He and Armitage began developing the idea into a feature film and, appropriately, sought funding on Kickstarter. They raised $87k to start the movie from almost 900 backers and began filming in 2013— only four years after the website originally launched.

“At the time we started, the idea [of using online crowdfunding platforms] was very new, fun and fresh, but we knew that novelty could wear off… What [would be] interesting in the long term was… a story about people chasing their dreams, which everyone can relate to,” explained Cooper.

From there, Cooper and Armitage looked at a handful of projects before settling on three stories: A filmmaker named Dallas King; Dale and Fred, a pair of inventors in the desert; and Brad Carter, a musician with a neurological disease eroding his ability to play guitar— whose story is the centerpiece of the film.

“The film follows Carter and his struggles to get beyond a health issue, while at the same time trying to fulfill his musical passion put on hold by a neurological disease,” says Cooper. When Carter secures his funding in the film, he realizes that the financial struggle isn’t the only one he will encounter.

The anxiety of accountability 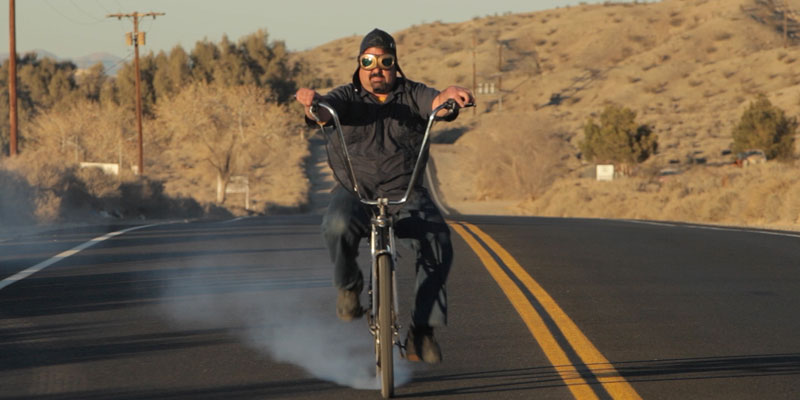 “When you crowdfund, you’re putting your social equity on the line,” explains Cooper, who says that these platforms have changed the way that things are created. Makers must be transparent with their micro-investors, which reduces the creative flexibility that most are used to. A creative process cannot change course, and the final product must live up to the expectations which a maker promised—  “There’s a lot of social pressure to deliver. If you can’t, you’ve failed yourself, all of these people, and you’ll probably never get a shot to do it again.”

Cooper felt this during the time of his own campaign, saying that, “When we funded we thought we would have it done in just over a year, and it’s taken three years, and that’s not because we didn’t want it to be done in a year— it just took that long for the stories that we were filming to get to where they needed to be. There is a lot of pressure and you have to balance it with your own creative ambitions as you strive to make what you’re going to make.”

During the process, Cooper discovered that accountability to investors is a major factor in the success of crowdfunding platforms. By democratizing finance through transparent cooperation and shared-input, accountability is used as capital. This not only provides the makers with a resource to receive funding, but also protects the investments that donors make.

In 2011— early on in the filming process— Cooper came across a company in Long Beach, California promising to make Kobe Beef Jerky and he and Armitage attempted to include them in the film. The jerky boys never responded, but did inform their investors that the company would be featured in the film. Investors contacted Cooper to verify the company’s claims, which quickly led to the discovery of a scam.

“We found out [the company] wasn’t who they said they were, and likely had no intention of ever making what they were promising,” says Cooper. “We helped lead a publicity campaign, reached out to some press, and Kickstarter ended up taking down their page before they money was charged through. In theory, we saved about $100k from being stolen… People might look at [this example] and think fraud is sort of rampant [on these platforms], but I think this is an example of the system working. Backers asked questions and were able to verify that [the company] wasn’t real. As a result, the scam wasn’t successful. “

Crowdfunding is nothing new to Toledo. We’re home to more than a handful of businesses that have looked to online platforms for support. Some local favorites— including All Crumbs Bakery, Kengo Sushi, Black Cloister Brewing Co., and Fowl and Fodder— have the internet to thank for financial backing. Toledo’s collaborative community, looking to many, instead of a few, for financial help is no surprise.

Kim Sanchez, Glass City Film Festival coordinator, says that connecting people is at the core of the festival. “If you talk with filmmakers around here, they’ll agree that there’s a lot of resources here, but almost no infrastructure, or ways for them to interact with an audience,” explains to Sanchez. “There are other film programs in the area, like the Tree City Film Festival, and we’re trying to build on that energy. It’s a great time for collaboration and getting people involved in film.”

To bring the idea to fruition, Sanchez and other committee members began tapping their individual networks to pool resources. “Everything that has been done so far has been done completely through volunteer effort. Everyone just wants to see it happen so badly. We’ve been encouraging our networks, friends, and anyone who could offer something to try to get on board,” says Sanchez.

Collaboration is also important to the festival’s venue, the historic Ohio Theater. The theater is an ongoing project for United North, a local community development corporation that has spent the past few years renovating the theater. Sanchez and other festival organizers hope to not only help filmmakers, but also the theater itself: “A goal for the festival is to help spur economic development on Lagrange Street.”

According to Sanchez, having Kickstarted serve as the opening night feature is no coincidence. The message of Kickstarted mirrors the goals of the festival.

“The film had an overwhelming response from our screening committee. Because of the content and the drives of the film, we thought it would be a good first impression,” says Sanchez. “Kickstarted is very true to the rest of the character of the festival. If people only choose to go one night of the three days, I think opening night would be the best choice.” The evening will also preview the other 29 films featured in the festival, which come from 11 cities and 8 different countries, including France, Korea, and Sweden.

“Crowdfunding is the perfect tool… it’s said in the film that there are four pillars of making anything: production, marketing, distribution and funding,” explains Cooper. “Production has never been easier, thanks to digital creative tools… that are available to everybody; distribution has never been easier [because of] the internet… and marketing with social media [is open to] anyone. The last thing was the funding, and crowdfunding has opened the opportunity up to anyone with any idea. If they’re willing to put their name behind it in good faith, they can go out and pursue the things they want to do with their lives.”

Cooper looks forward to showing his feature to his hometown, citing a growing arts community as an example of Toledo’s ingenuity and potential.

“I don’t think there’s a town in America that’s more right for this sort of opportunity than Toledo. (The city)  could sort of use an economic push, and has a lot of self starters and innovative, creative people,” he says. “I think this is something that will really resonate.”

The Glass City Film Festival runs from Thursday, May 19 through Saturday, May 21.
During Opening night, audiences and filmmakers will enjoy a red carpet reception
and viewing of Kickstarted, from 6-9pm.
Following, the Filmmakers Faction after-party will be held at
The Attic (1701 Adams St.), with live performances by Shmotel and Bliss Nova.
Tickets: $60 for an All Event Pass, $30 for a Friday or
Saturday day pass, or $10 per screening block/panel.

After opening night on Thursday, stick around to see what else the festival offers. 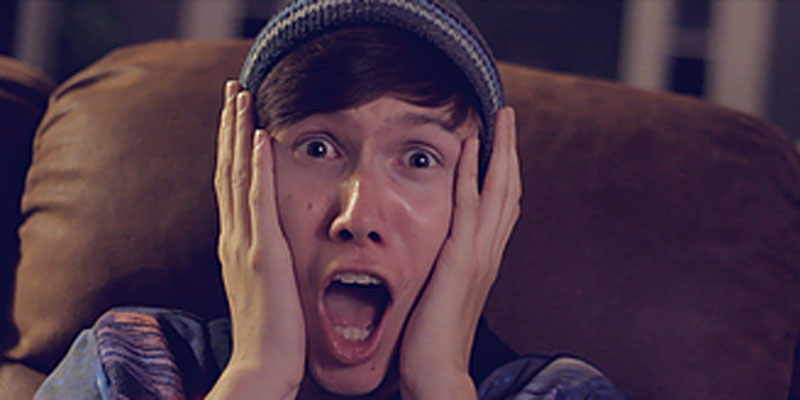 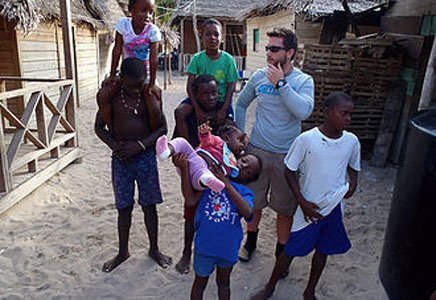 Noon-1:30pm. Graveyard of the Great Lakes: A Shipwreck 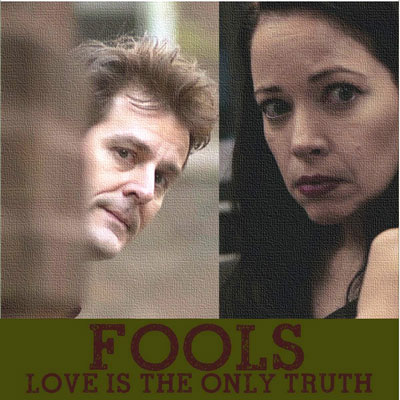 Hunter’s Quest to Discover the Past*

6-7:30pm. Panel: Resurgence in the Rustbelt
Hear from local creatives about the supporting
role filmmaking and the visual arts play in
our community. Short film: Toledo, My Father*.

7-9pm. Surprise Film in “The Old Library” (across the street from the theater)

6 Short Films
Morbid films. Not all art suitable for children.
Featuring: Heatwave*, The Chest*,
A Way Out*, Keep it Clean*

10-11pm. Awards & Closing
Awards made by Gathered Glassblowing
Studios will be given to the best of the fest.
Categories include: feature film, short film,
cinematography, editing, produced screenplay,
and an audience award.

*Films made by Toledo residents or current Toledo natives.