Tucked away in Swanton, a stone’s throw west of Toledo, is a musical institution. Opened in 1957, the venue saw some of the biggest names in blues –– B.B. King, Count Basie, John Lee Hooker and countless others— play before boisterous crowds. The club was run by a music-loving couple who were the first African Americans in Northwest Ohio to obtain a liquor license.

The legacy of Hines Farm— for over 20 years, a little music hall in the woods showcased the pulse of music travelling through the area. On September 15, a documentary about the club’s history will be screened at Jerome Library on the campus of Bowling Green State University, as part of celebrations commemorating the 50th anniversary of the BGSU Class of 1968.

Donahue first became familiar with the club’s history while he was a student at the University of Toledo. A lover of the blues, he had heard the story of the classic club from a professor and from numerous musicians. He had been told that the structure had burned down years prior, after its closure in 1978. To his surprise, when he sought out the ruins of the famous establishment, he learned only the original farmhouse had been destroyed–– the sacred club/ music hall itself still stood. (The new owners renovated the building in 2013.)

“I knocked on the door and the owner at that time, Henry Griffin opened the door of history,” Donahue said. “He invited me inside and told me tales of some of the good times that happened there. As well, he showed me some amazing photographs and posters from back in the day.” 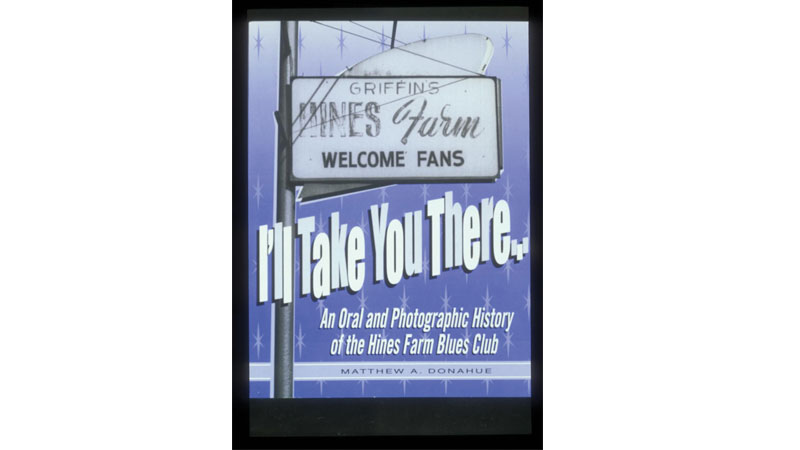 I’ll take you there

This captured Donahue’s imagination, and led to his extensive research on the club and its legacy. The result was a book, I’ll Take You There: An Oral and Photographic History of the Hines Farm Blues Club, which was published in 1999. Eventually Donahue teamed up with co-producer Marlene Harris Taylor to produce a documentary that first aired on WBGU in 2003.

“There were many memorable experiences while making the film,” Donahue said. “One of the highlights was interviewing B.B. King on his tour bus and being blown away. After so many years, he had such vivid memories of the Hines Farm Blues Club. Or interviewing Bobby ‘Blue’ Bland backstage at the Fox Theater about his performances at Hines Farm. Also, interviewing local performers such as Art and Roman Griswold, Big Jack Reynolds and Blind Bobby Smith to name a few, and their kindness and graciousness in allowing me to spend time with them. I think everyone working on the film at that time knew it was something special and we treated it that way.”

“Hines Farm Blues Club” screening Saturday, September 15 at 11:30 am at the Pallister Conference Room in Jerome Library on the campus of BGSU.