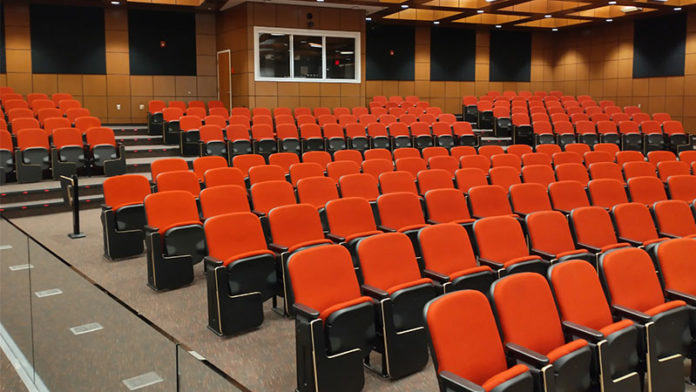 Toledo can be a challenging place to live for fans of independent and foreign films. Occasionally those films will be exhibited at one of Cinemark’s area locations, but more often than not area audiences miss out on the chance to see them on the big screen.

The Toledo-Lucas County Public Library began to offer a solution in 2004 with the introduction of the Film Focus series. First organized by former manager of the audiovisual department Tracy Montri, the program allowed library patrons to watch independent documentaries and foriegn films with an audience— without cost.

The program was held twice a year in six week segments, once in the spring and once in the fall. For 15 years Film Focus was a highlight at the Library for local movie lovers. Then, in early 2020, Film Focus was put on indefinite hiatus.

Intermission over
As the world continues the slow process of returning to “normal,” the Library has been relaunching many of the in-person programs that previously filled their calendar. Film Focus began its 2022 season at the Main Library’s McMaster Center in March.

“We’ve just been getting into in-person programming system-wide,” said Amnity Fuleky, Adult Services Librarian in the Computers and Media Department. “It was pretty tentative on whether or not we would be able to resume in-person programming with the state’s recommendations for COVID protocols.”

“The Library has been very cautious about COVID safety, so it’s been a balance between that and getting people back to the programs they’re looking forward to,” said Eric Sobel, a fellow Adult Services Librarian.

Film Focus resumed with its focus on small documentaries and foreign features. The season kicked off with Chisholm ‘72: Unbought & Unbossed, a documentary about Brooklyn Congresswoman Shirley Chisholm. The following week saw a showing of the Japanese drama Shoplifters.

“It’s sort of been a mainstay, the same sort of films,” Fuleky said. “I know in the past Tracy focused on award-winning films, specifically. This time around, we went with a lineup that we had chosen before the pandemic hit. In the past, we have done Q&As with the directors, so that might be something we’d be interested in doing again.”

“It’s a great way to showcase films that might otherwise fly under peoples’ radars. We try to highlight different cultures, films in different languages,” Sobel said.

Looking ahead
The initial turnout for the program’s relaunch saw smaller audiences than pre-COVID levels, Fuleky said, but she noted that the numbers have been growing each week. “Anytime that we can reach anybody, it’s a win for the Library,” she said.

“I think people get into an artistic rut with their movies,” Sobel said. “And (the Film Focus series) is a really good opportunity to get outside their comfort zone, expand their horizons, watch something that’s not a sequel or a superhero movie.”

The Film Focus program is scheduled to return in October. Watch for screening announcements soon on the Library’s website. Fuleky and Sobel have big plans for where they’d like to see the program go in the future. “Where I’d like to see the program going is recruiting more local filmmakers to use the space to show a first-run of their programs, something we could facilitate. I think exposing local talent would be really great,” Fuleky said.

“Working at the Library, we counter the thought that libraries are places that just house books,” Sobel added. “We really want to send the message that there’s a whole host of programs that appeal to a very broad range of people.”