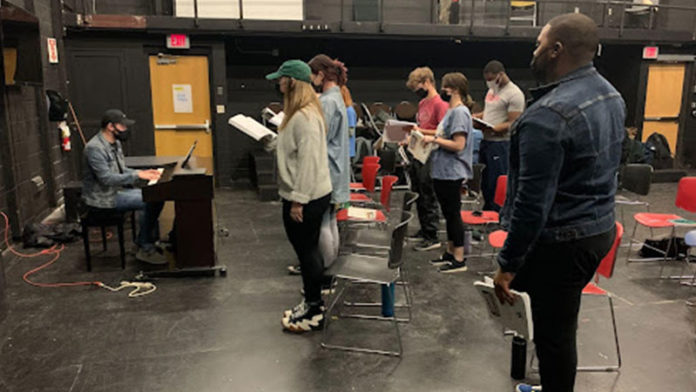 Spelling bees have been a battleground over the decades, full of anxiety over the spelling of words, and subdued laughter when incorrect spellings were declared with confidence. The University of Toledo Department of Theatre and Film is reviving childhood nostalgia with their take on The 25th Annual Putnam County Spelling Bee. The musical, originally performed on Broadway in 2005, focuses on a diverse group of kids who share their life stories while battling it out to spell a unique list of words.

Spelling Audience
Running through much of April, audiences are encouraged to show up early for a chance to be part of the performance. A select few audience members will be asked to briefly participate in the show. “There will probably be a signup sheet outside, and if you get lucky you might be asked to spell a couple of words,” explained Jeffery Enck, assistant director.

Stage manager Jacob Prokup also looks forward to the audience participation, acknowledging, “It’ll be a challenge because it’s something we can’t test until we perform the show. So that may throw a wrench in things, but we’ll have plans to get through.”

Taking direction
Overseeing this production is associate professor and award-winning director Dr. Matt Foss, who will help to guide the cast and make the production shine, though the students selected the show. “The students were really interested in doing a musical, and they brought this up. We asked the question, ‘Why this play now?’ The musical talks a lot about anxiety, what does it mean to be a friend, bullying, and wanting to belong, which I think students that have been navigating COVID for the last two-and-half years, are feeling palpably.”

Reflecting their teaching style, the University’s Theatre takes into account the needs of the students and the audience in this current moment. Foss explained, “We’ve examined who these kids are, what they’re going to look like on stage, even how we’re orienting the audience around the space to see ‘what does this play look like right here, right now in Toledo, Ohio?’, with our students. This version is not beholden to those that have come before. We’re not trying to reinvent the wheel or to use the same wheel as everyone else.”

Characters cast
The cast is extremely excited to show the audience how their characters unfold. Jalen Riven, a communications major who is also on the football team, plays Mitch Mahoney, the comfort counselor who is at the bee due to a court mandate. He is most excited to showcase the growth of his character and how the other characters come to respect him.

“I think it’s really cool. It just shows how people can grow and change over time…things like this do happen in real life,” Riven explains. “To experience this, I think it’s a really unique thing… the scene that I’m singing in — the prayer of the comfort counselor — it’s kind of the peak once I change as a character.”

Another cast member, Marquan Deney, who plays “Chip” Tolentino, is also looking forward to his role in the musical. “When we see productions of the 25th Annual… it’s the same characters and the same outfits and the same design. This production is not like
that. I don’t think I ever saw a black Chip in all the productions I’ve seen. It’s a new perspective that no one’s really had…college kids and high school kids, and even adults, are going to relate to the story of Putnam — especially from this point of view. They can relate to each kid and each kid’s anxieties and perspective.”