Plays explore life, death and what happens in between 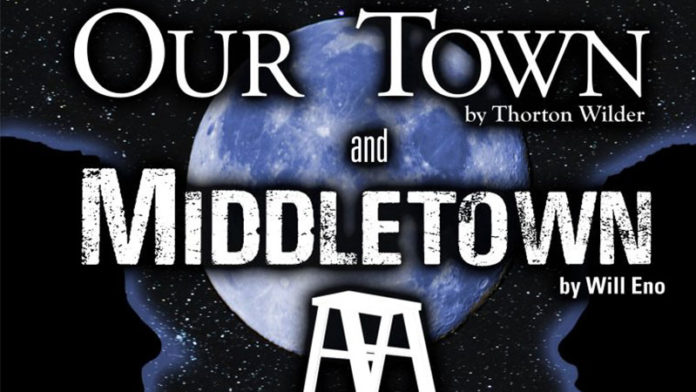 The Toledo Rep and Actors Collaborative Toledo (ACT) are joining together this spring to stage Our Town by Thorton Wilder and Middletown by Will Eno. From opposite ends of a century, the two
plays take a powerful and sometimes funny look at American life, how we see ourselves today and how we look back on the values that have shaped who we are.

“Both shows have similar thematic elements,” said Jeffrey Albright, ACT’s board president and co-founder. The Rep is taking the lead on “Our Town,” while ACT oversees the production of “Middletown.” The two companies are collaborating on elements such as
financing and design.

Classic and contemporary
Both plays are set in small towns that could be anywhere in the United States. Widely considered a classic American play, Our Town tells the story of life in the fictitious town of Grover’s Corners, New Hampshire at the turn of the 20th century. Director Sonia Perez says the play explores themes related to family, love, marriage and death, which anyone can relate to on some level. “It’s really about people, about relationships, about connecting with one another and really
appreciating the here and now,” she said. “Do we really take the time to appreciate those moments of laughter, of joy?”

Perez said the play’s minimalist set allows the audience to “step into the play” in a unique way. “It actually lends itself to the audience really listening and absorbing what the characters are saying,” Perez explained. “You’re not being given all the information, but that, in a way, broadens your horizons and connects to your imagination in a completely different way.”

Middletown premiered in 2010 and offers a contemporary take on similar themes tackled by Thorton Wilder when he wrote Our Town in 1938. In Middletown, a friendship between longtime resident, John Dodge, and a new arrival, Mary Swanson, intersects with the inhabitants of Middletown in strange and touching ways. “It deals
with how we’re always kind of in the middle of something — we’re in between death and birth, we’re in the middle of a book, we’re between jobs — we’re always in between,” said director Dave Nelms. “It’s poignant, sad at times, and very, very funny.”

Reaching new audiences
While it is not the first time the Rep and ACT have worked together, Albright noted it is the first time they have presented shows in repertory — meaning the plays are performed on alternating days during the same time period.

Albright stated one of the greatest benefits of working together is that Toledo Rep audiences are introduced to ACT, and vice versa. “Artists work best when they work together,” said Albright, who also serves on the Toledo Rep’s board. “Rather than creating an atmosphere of competition, we strive to create an atmosphere of cooperation.”