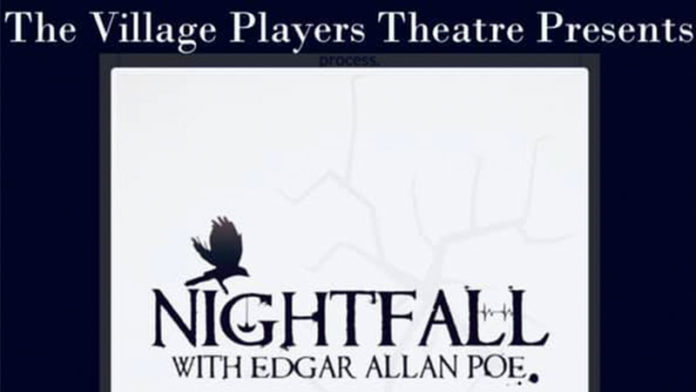 Which is your favorite – and what is the scariest – tale written by Edgar Allan Poe? You can see four of the legendary writer’s own favorites brought to life in “Nightfall with Edgar Allan Poe,” presented October 29 – 31 by The Village Players. And in addition to Poe’s dark tales, Director Larry Farley adds technology – in the form of special effects, lighting and projection screens – for a “sensory immersive” experience that’s perfect for Halloween weekend.

“We’ve been looking for new traditions to create around Halloween in the Toledo area,” explained Farley. “I came upon this play and thought it could be the perfect literary Halloweenish experience. It’s a special encounter – much more than simply watching a play.”

Is he or is he not mad?
Playwright (and Cleveland resident) Eric Coble explores the nature of madness in “Nightfall,” which focuses on Poe’s especially dreadful characters in a great setting for a Halloween-related adventure. In his effort to convince us – and himself – that he is not mad, Poe weaves a spell through the adaptation of four tales he considered his best: “The Raven,” “The Fall of the House of Usher,” “The Pit and the Pendulum” and “The Tell-Tale Heart.”

Two years ago, the Village Players and Farley presented “Nightfall” as a reading, using some special effects and lighting. It was also presented at the Toledo Repertory Theatre (in collaboration with the Village Players) last year as a reading. “The readings were well received,” Farley said. “The play really lends itself to special effects, but also to a full-scale production, which is what we’re doing now.”

Technology, subject lend to the spookiness
Farley and Technical Director David Nelms worked out the details of adding tech features to the performance. Besides adding lights and special effects, this production will feature side-stage projection screens, creating an interaction between on- and off-stage effects.

“We wanted to feature more of the sensory experiences not usually seen in community theatre, and especially because of the nature of play itself,” Farley said. Add to that a cast dressed in period costumes and the result is a little darker than the environment you’d typically see on stage. “I’ve read all the Poe tales we’re performing, and in my opinion the ‘Tell-Tale Heart’ is the darkest one,” Farley said. “It does make you wonder whether Poe was mad.”

Following protocols
The performance of “Nightfall” is the second production of the Village Players performed before a live audience since the pandemic stopped operations in March 2020. In accordance with ongoing COVID- 19 protocols, all cast members and all Front of House personnel have been vaccinated. Guests are required to wear masks when indoors during performances.