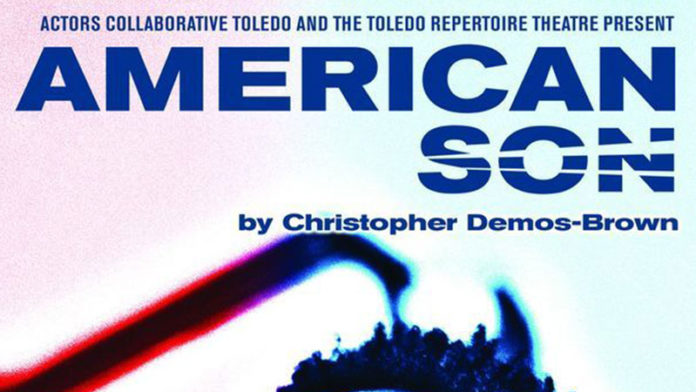 This May, the Toledo Repertoire Theatre presents American Son, a play by Christopher Demos-Brown. A collaboration between the Rep and Actors Collaborative Toledo (ACT), the play will run for only one weekend, May 6-8. Nearly 90 minutes in length with no intermission, the show is a rollercoaster of emotions and identities, with themes that will resonate with many Toledoans.

Perspectives colliding
American Son tells the story of the detainment of a bi-racial young man after a traffic-stop incident, with insight into the many assumptions and biases that follow the arrest. Though the father figure is a member of the police force, this story is more about the struggles of, “two races raising a person,” said Barbara Barkan, director and founder of ACT..

The play had been in queue since pre-COVID, having been selected over two years ago. No matter how many times it was pushed back, ACT’s board felt it was still important and needed to be shared with our city. “My perspective as director, I’m looking at the family dynamics. I’m looking at these two people, these are professionals in their own careers. A bi-racial couple who have this one son, and what were the dynamics in raising him? The philosophies? Religions? Ethics? Morals? What goes into raising a child? Did it, could it, has it impacted this particular event?…It’s not just black and white. There are shades of gray,” Barkan explains.

Always Onstage
Natalie R. Bostelman, another board member of ACT who has a leading role in the play, explained that for her, American Son is about exploring identity. “The script is so nuanced. There is so much intent in what this author did…I hope [the audience] sees a snippet of themselves no matter what their background is. I think no matter what journey she takes through this play, I think someone has seen or heard or felt something she has felt.”

Bostelman plays Kendra Ellis-Connor, an African American mother with a PhD in Psychology, who is always looking for others to be using her own field against her. Joe Capucini plays Scott Connor, her estranged husband and a police officer. With no way to casually break up the play without altering the mood and energy that will undoubtedly be created, both actors will remain on stage for nearly all 90 minutes.

Though seating may be limited, Barkan encourages anyone and everyone to come and see the show. She said that even if they think the show’s themes might not apply to them, they certainly need to learn about the content and crises the play tackles. “Whatever your political, religious, biological, ethnic beliefs are, you cannot not see this show. If one person out of the three performances leaves the theater and says… ‘I get it now. I get that I don’t get it,’… then they’re on their way to finding out why they don’t get it.”