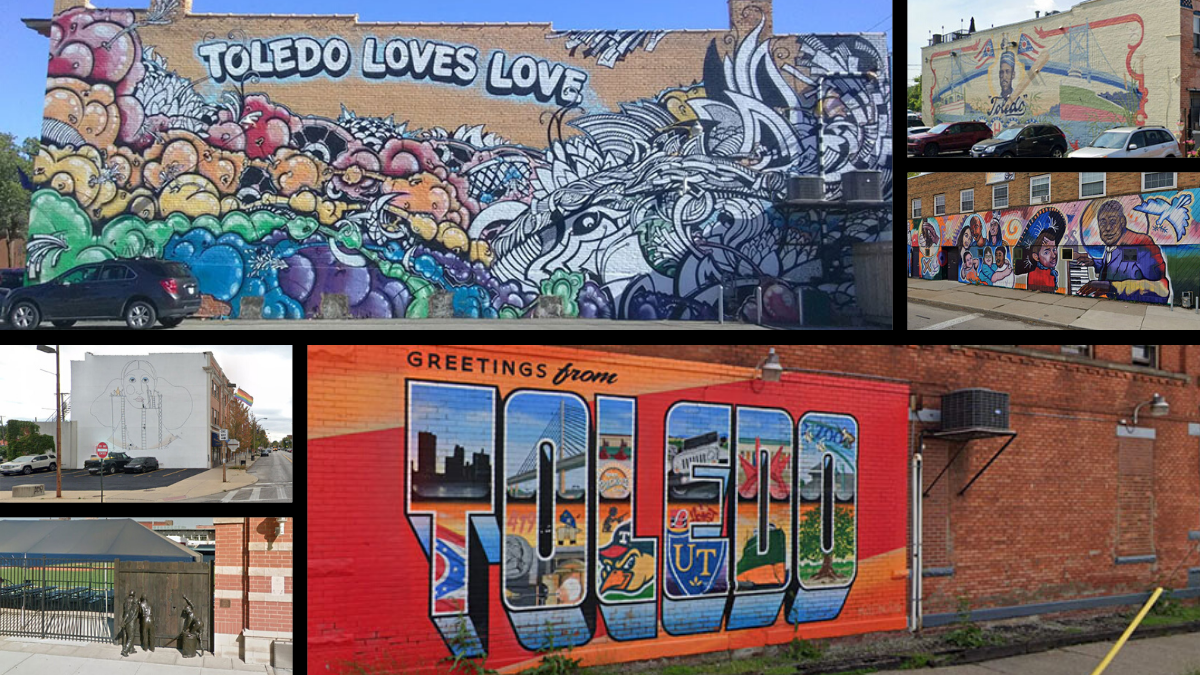 Toledo may be more silent right now, but the streets of the Glass City always sing with beauty. Due to the efforts of area artists and the support of programs like One Percent for Art, some of our area’s most striking and meaningful works are on constant display outdoors. And even if you don’t want to venture out to see them yourself these days, we can bring some of these remarkable pieces of art to you— thanks to Google Street View.

For more pieces of public art, check out this interactive map from The Arts Commission. 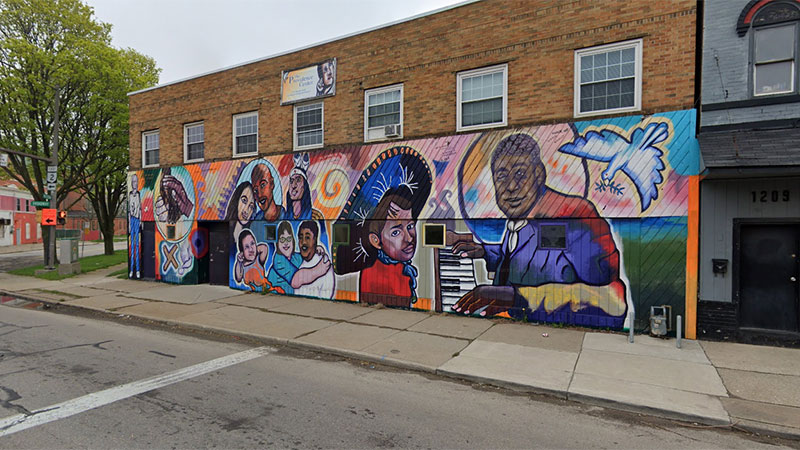 In a project conceived by area art teachers and spearheaded by famous Peruvian artist and activist Mario Torero, the buildings of Broadway are adorned with over a dozen beautiful murals celebrating famous Mexican icons and Toledo legends, including Sofia Quintero and jazz legend Art Tatum. 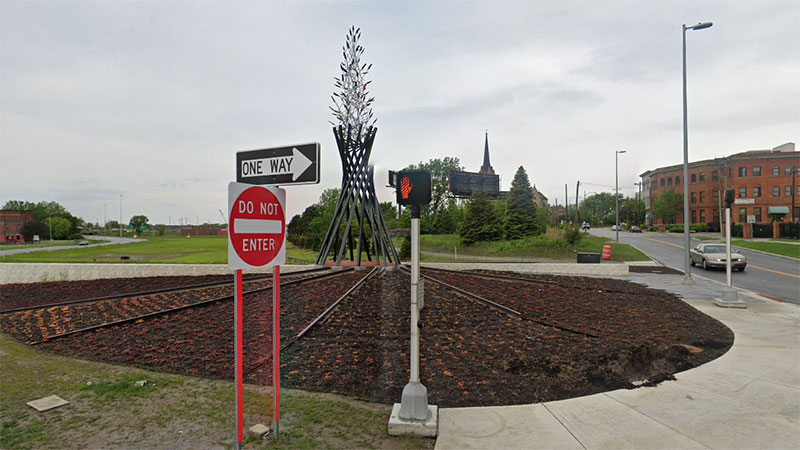 Made in: 2018
Located at: Erie and Lafayette

At nearly 50 tall, the Gateway Project is one of the most instantly visible sculptures in the Glass City, and one of the most meaningful. Constructed at a cost of over $600,000 furnished by Toledo’s One Percent for Art Program, the piece is meant as a welcoming gesture to all those entering downtown. The sculpture features pieces representative of Toledo, including the glass that adorns the top of the structure and the railroad tracks that branch out from its base. 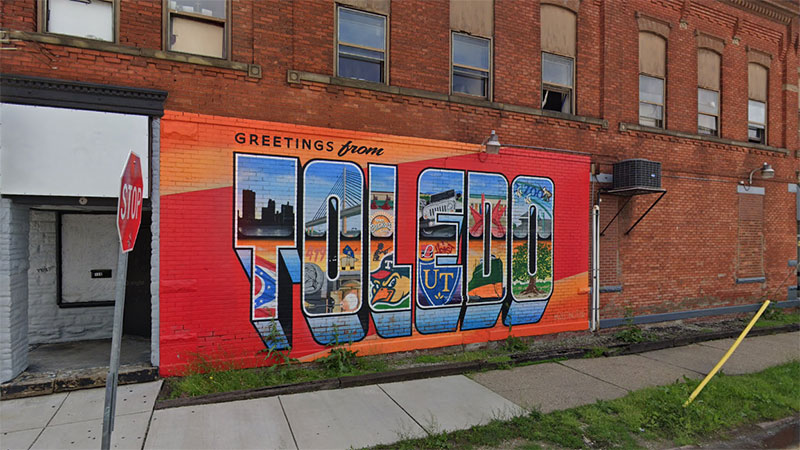 Created by mural artists Victor Ving and Lisa Beggs of Greetings Tour, “Welcome to Toledo” is one of many postcard-inspired murals the pair have created celebrating communities around the country. Among the mural’s recognizable pieces of Glass City iconography there is a tribute to young comic creator Holden Folk, who donated $50 to the project by selling his comic books– Folk’s own creations, Super Pig and Bacon Boy, can be found in the first “O.”

ISLAND SANCTUARY FOR THE GHOST OF MOSES 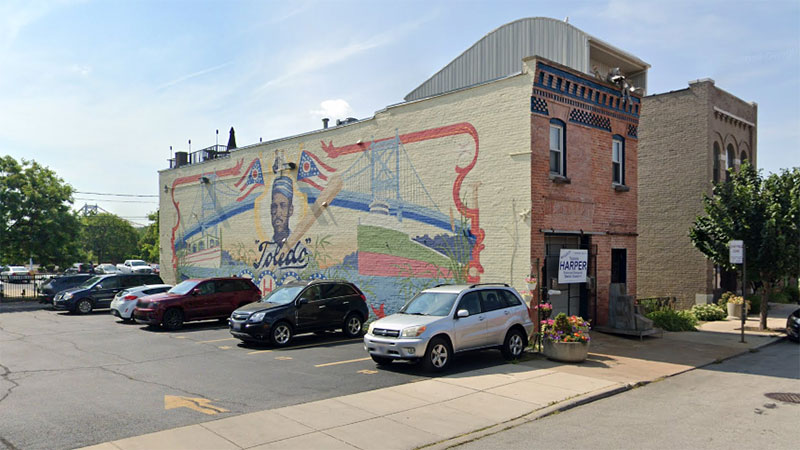 Moses Fleetwood Walker was one of the first black men ever to play professional baseball— for the Toledo Blue Stockings in 1884. Artists Natalie Lanese and Douglas Kampfer, commissioned to create a mural in the Warehouse District on the subject of baseball, paid tribute to this less-celebrated pioneer of the game with this beautiful mural just a stone’s throw away from Fifth Third Field. 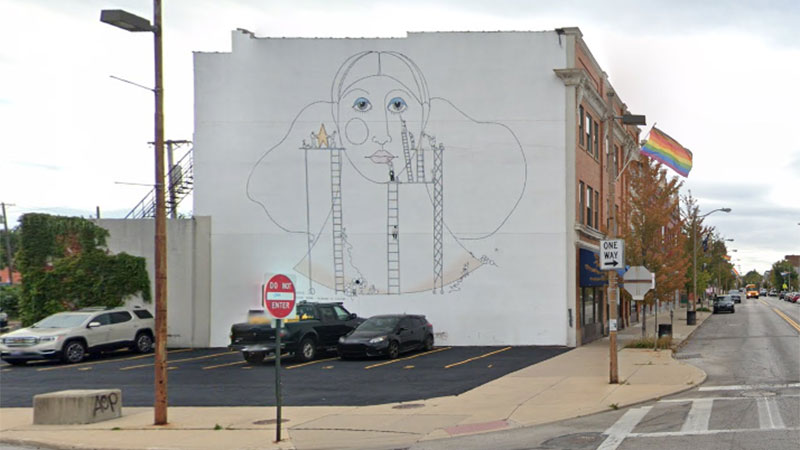 Judy Dilloway was a Toledo artist whose remarkable and imaginative works would not capture the public’s attention until her tragic passing in 2006. To celebrate her memory, a giant mural of one of her works– depicting a woman being “built” by a slew of tiny construction workers– was painted by area artist Maura Amato. Ironically, Dilloway may not have been thrilled with the mural, as she originally had disliked the drawing and had even thrown it away. 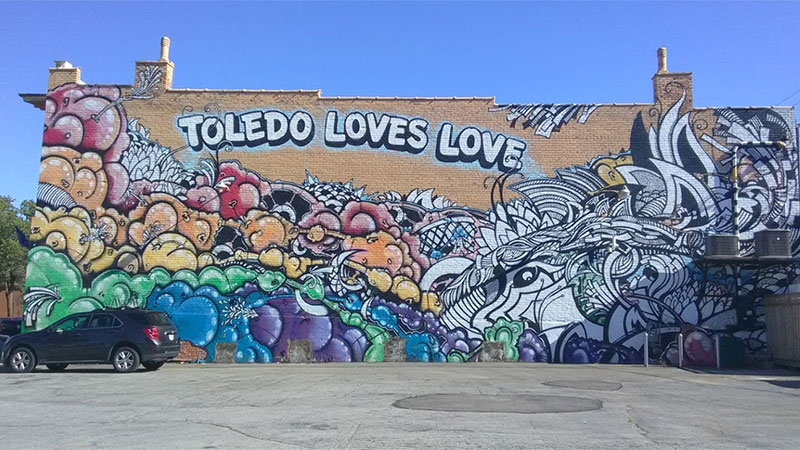 “Toledo Loves Love.” One of the most iconic pieces of art that has ever been displayed in the Glass City, the Love Wall was created by area artists Matt “Mr.” Taylor and Mede. Painted on the side of Georgjz 419, the mural has become a symbol of the Glass City’s LGBTQ+ community and the centerpiece of the annual Equality Toledo Loves Love Fest event. 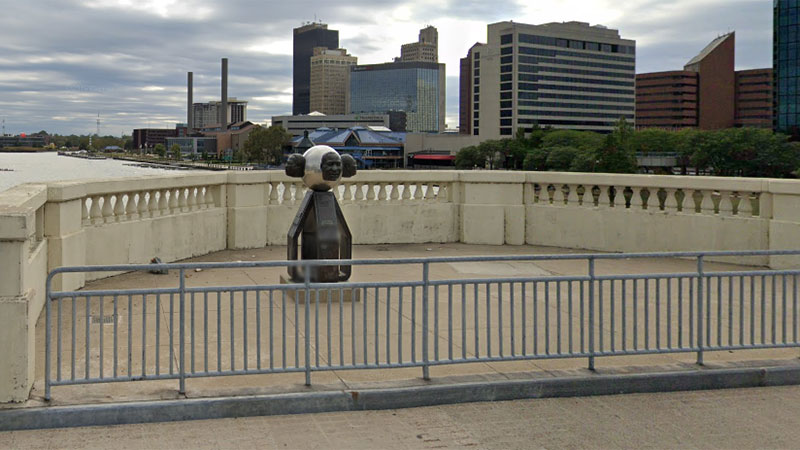 Made in: 1989
Located at: Martin Luther King Jr. Bridge

One of the more unique sculptures made in tribute to the legendary Dr. King is this 6-foot piece depicting four busts of King’s head on four sides of a steel orb. Each face has a different expression and is aimed in a different direction– north, south, east and west– perhaps suggesting that the eyes of history are always watching us. The piece was created by Constancia Gaffeney and the late Wil Clay, and its base is inscribed with quotes from some of King’s most memorable speeches. More info here.

Much of the Garden’s collection is obscured by trees in Street View, sadly, but some of the Glass City’s most remarkable works of art make an outdoor home here. Perhaps the most famous piece, Alexander Calder’s spiky, red, 13-foot “Stegosaurus,” returned to display last fall after a year-long hiatus for cleaning and repainting. Check out more sculptures at the Toledo Museum of Art here.

One of Toledo’s most beautiful sights holds even deeper meaning nowadays. While you can’t see this on Google Street View, the center pylon of the Glass City Skyway is lit with LED lighting and floodlights color the cables running on either side, creating a breathtaking view that makes it a wonder to behold at night (unfortunately Google’s Street View only provides shots during the day). The bridge is usually lit up in patterns designed by area artists— see the Arts Commission website for more info. Since April 9, the bridge has been one several area landmarks colored blue as part of the #LightItBlue campaign, which is seeing buildings and landmarks across the United States lit in recognition and gratitude of the health care workers on the front lines of the COVID-19 crisis. The Tower of Light and the Park Vision Screen at Promenade Park, the ProMedica Steam Plant and the Anthony Wayne Bridge are also lit as part of the #LightItBlue campaign. 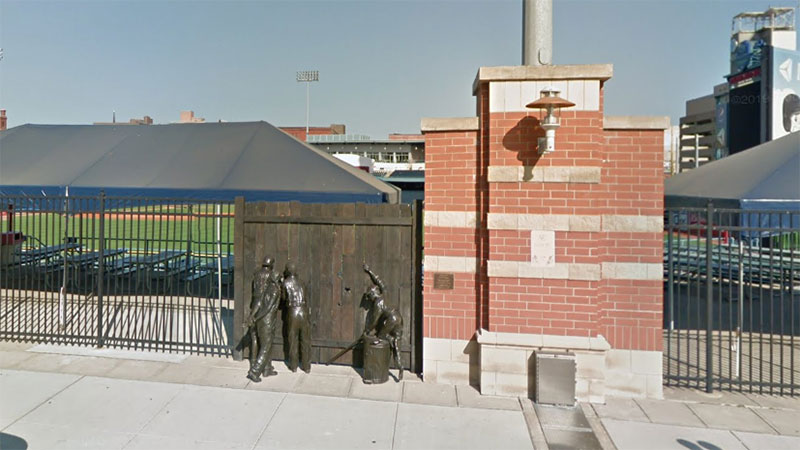 It’s impossible not to feel pangs of nostalgia while looking at artist Emanuel H. Enriquez’s tribute to baseball and childhood. The sculpture sits beyond the fence of the Mud Hens home field, capturing the excitement so many kids feel about sports as its subjects peer into the ballpark. Enriquez, a Pemberville native, dressed his characters in clothing appropriate to 1927, the year Toledo first won the national pennant. More info here.

Rockets vs. COVID-19: How UT and the MAC Plan to Play the Game During the Pandemic