HILDO: Take it to the limits

Nothing is safe in City Politics

Gary Byers may be the Rodney Dangerfield of City Politics, Gary gets no respect.

See, Gary is what you might call a career politician. Elected Maumee Muni Court judge on the regular for decades. A nice, safe elected seat, largely out of public scrutiny.  Incumbent judges rarely are challenged at the ballot box, and so they can feed at the public trough unmolested until mandatory retirement after they turn seventy. Even better, the Maumee gig was not in the rough and tumble bare knuckle world of Toledo politics.  It was out in the staid and sleepy politics of the suburbs. Yep, Gary had it made in the shade.

On your feet, lose your seat
It all came apart in twenty seventeen, when Gary drew an actual challenge for his safe, cushy seat and, even more shocking, lost. Having been king of the Maumee bench for much of his adult life, he now faced the prospect of making his living as a practicing attorney.

Egads! Perish the thought. Like many of his ilk, the idea that he would leave public office and make his way in the private sector was a daunting proposition. Think Rob Ludeman and George Sarantou, who have run for every local seat but dog catcher.  Which isn’t an elected position here in the swamp, but we digress.

Anyhoo, Gary was in luck.  County Commissioner Carol Contrada, elected after Ben Konop crashed and burned, was vacating her seat. Boy, the Konop years were some fun, eh?  From ‘Boo, Ben’ to trampling the US flag on some debacle inexplicably called Welcome to the Monkeydome, the hits just kept on coming. But we digress again.

Gary ran for the open commissioner seat and won. Beat Sandy Spang, another star struck politico who has run for everything in sight until Wade finally created a position for her in his administration so she never has to face the terror of private sector employment again. And Gary was back in the saddle!

County elected positions are the crown jewel for folks who never want to leave the public sector. They pay well, are positions of power and influence, and, perhaps most importantly, don’t come with pesky term limits.  The perfect landing spot!

Here’s the deal.  Unlike county positions, state rep and senate seats have term limits. So reps usually end up running against each other for a senate seat, leaving some out in the cold. School board seats don’t have term limits, but they also don’t pay.  Ask Lisa Sobecki. She knows what’s up.  She served on Toledo’s school board and is now a state rep. What’s her next step? Back to gainful private employment?

Of course not! She’s running against Gary!

The primary is still five months away, but Sobecki already has announced some major endorsements for her campaign.  We will see if Gary has made the right friends in his three years in office or, as we said, is there no respect?

Our prediction? Gary’s out again, and runs for Maumee mayor in twenty twenty three. You read it here first.

Auld lang syne
As we pen this first column of twenty twenty two, here’s to a better, brighter year ahead. With more justice and less anger. More peace and less gunfire. More joy and less hatred.  Better health and more understanding and love of neighbors.  ‘Til next time, from all of us here at City Politics. 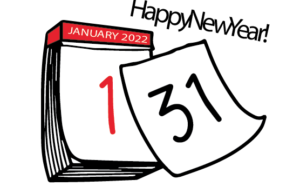