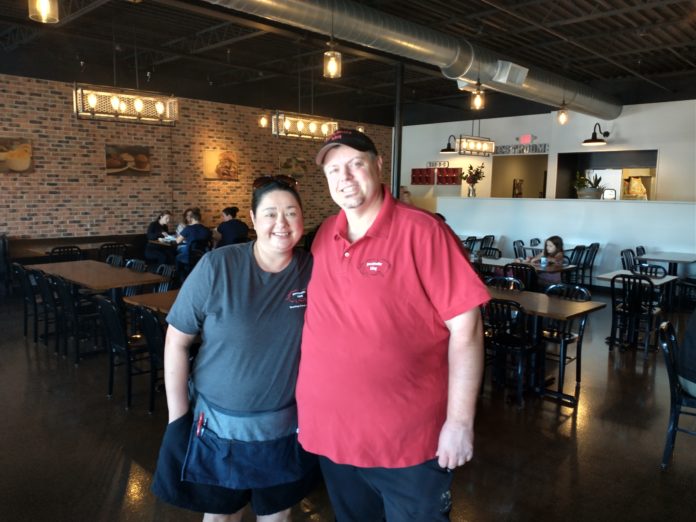 Porkbelly BBQ, located at 1616 E. Wooster St. in Bowling Green, right across from the football stadium, is locally owned and very proud of it. Our server, Stacy, said so right after extending us a warm greeting. She also told us that practically everything at Porkbelly— from the sauces to the cheesecakes— was made from scratch. The star of the menu, of course, was the slow-cooked, homestyle barbequed meat, available in sandwiches, platters and more.

“Our brisket can go toe-to-toe with any Texas brisket,” said PJ Earl, owner and head chef of Porkbelly.

The smell of burning cherry greeted us as we entered the restaurant. The main dining room has a clean look to it, with brick to one side and painted walls to the other, as well as polished concrete floors. To the back is an open kitchen, allowing diners to see the cooking process.

“We also believe in an open kitchen— if you want to look in there, see what we’re doing, please do, because we have nothing to hide.”

Our friendly server brought three bottles of sauce to the table— Spicy, Traditional and Honey Mustard. Porkbelly believes their meat can stand alone without sauce, but it’s there if diners want it.

“We always joke that barbeque sauce hides a multitude of sins, but there ain’t no sinners here,” said Heather Sullivan-Earl, co-owner and PJ’s spouse. “If you want it, it’ll come to the table in three bottles, but it doesn’t need it.”

All about the Q

We decided to start with some fries— bologna fries, that is ($7). These thick cut strips of smoked meat offered the texture and flavor you’d expect from good bologna, but with a nice crispness to the exterior. We tried dipping the fries in all the sauces— Spicy really wasn’t very spicy to our palate, but Traditional had a nice sweetness and the Honey Mustard had a great kick to it.

For our entrees, it was all about the barbeque. We ordered a Pulled Pork Sandwich ($12), which came on a brioche bun with a side of fries— potato, this time. This was one of the finest pork BBQ sandwiches we’ve ever had, all the more remarkable for the lack of sauce. The meat was perfectly flavored and wonderfully tender.

We also had to try the Porkbelly Sandwich ($13), which looks similar to the bologna fries in shape but had a different and very appealing taste. Fatty but not too fatty, with just the right amount of sweet sauce to compliment the meat.

The Two Meat Plate ($13) gave us a chance to try Porkbelly’s wonderful brisket off of the bun, and again, the meat shined. The combination of pulled pork and beef brisket was excellent, and the cole slaw on top (homemade, of course) gave the meat a bit of crunch.

The menu at Porkbelly is ever-evolving as Heather and PJ work to build a reputation in the area as a sit-down destination. They say that it takes 18 months for a new restaurant to really get its feet planted. After opening in May 2019, things looked to be on track for the couple— until 2020 happened.

“We’re still getting first timers from the area, three-plus years later that are showing up. So there’s a great feeling [of] momentum moving the way we want it to go, and we’re really excited about that,” PJ said.

“We joke all the time that we’re the best kept secret in BG,” Heather said.