The smell of molten metal evokes a distinct feeling that something heavy is in the air. Along the edge of the Birmingham Neighborhood in East Toledo, that vibe lives within one of the city’s hidden gems – Toledo Twisted Iron. Passing by, it’s hard to tell what’s happening inside the building on Wheeling Street, but this shop is where owner Dane Turpening has created numerous metal sculptures that can be seen throughout the city. 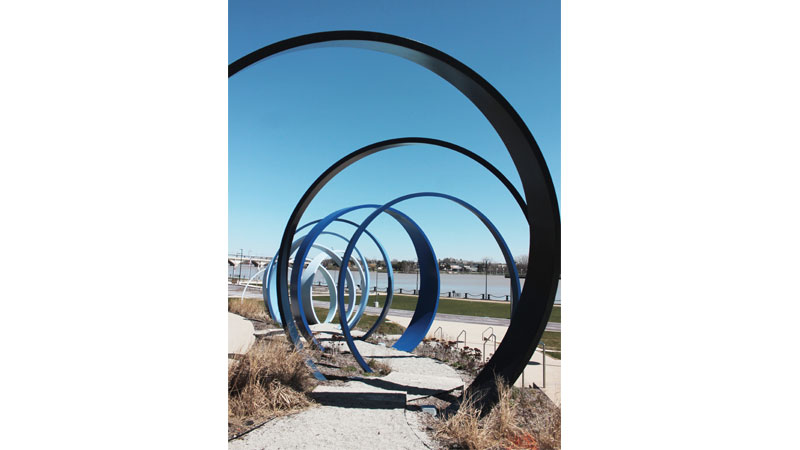 (Above) ‘Echo,’ consisting of 14 foot tall rings on the ProMedica downtown campus, is made of repurposed stacks from the former steam plant which were deemed unsafe.
Photo Credit: Courtney Probert

“I got started in this by building pedestals for glass artists, and things kind of branched out from there,” Turpening explains. “Some of our big things lately have been railings, custom furniture, and bar build-outs for restaurants. We’ve also been making some really elegant lighting fixtures for above dining room tables and outdoor lighting.”

Growing up in a creative family, Turpening became versatile with his craft. After receiving an associates degree in machining, he worked at MTS Seating in Temperance, Michigan. While working as a press operator there for over 12 years, he learned powder coating and welding, skills he needed to begin his current creative pursuit eight years ago.

“I started doing blacksmithing in my garage,” Turpening says. “But eventually I had to start renting a shop because the garage couldn’t handle what I needed to do.”

ProMedica’s installation of ‘Echo’ is a notable example of Turpening’s work. The iconic art installation gave the blacksmith recognition, but the public likely already knew his work from downtown hotspots.

“We worked on Fleetwoods, Nine, and the firepits downtown”, says Turpening. He’s also worked with glassblowers to create pieces like Morgan Stanley— a 600 pound chandelier that was constructed in conjunction with the Toledo Museum of Art. And Volo— the ProMedica logo represented as a flock of birds that can be seen in the main lobby at the company’s new health and wellness center at 5700 Monroe St., Sylvania. 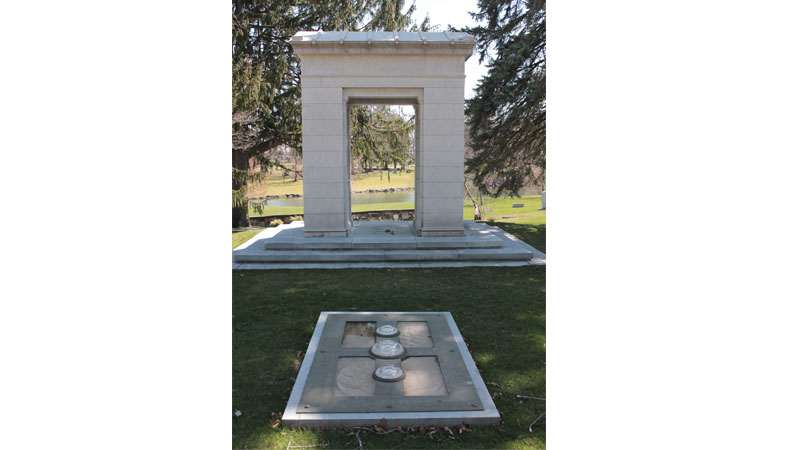 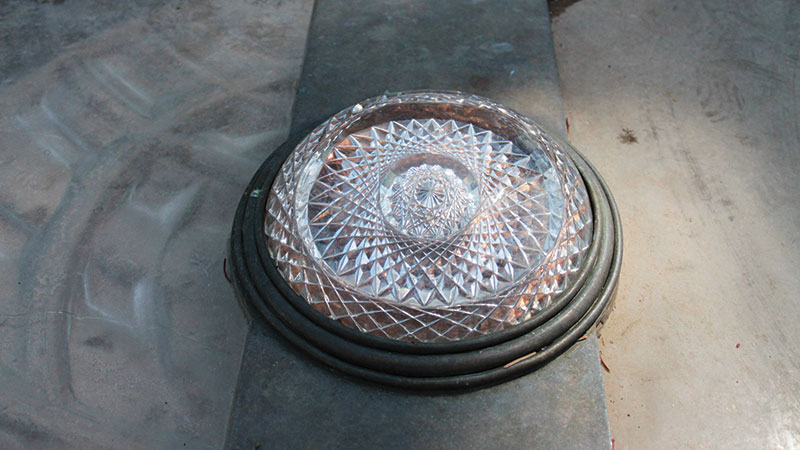 The bronze Libbey monument in front of the Libbey grave at Woodlawn Cemetery is also one of his creations.
Photo Credit: Courtney Probert

Turpening also does pro-bono projects for nonprofits. “It’s one of the things I like to do for the city because the city has given me so much. This is me giving back and helping to make things work”, he explains.

The newest piece he is working on is ‘Keys to Opportunity.’ Commissioned by the Fair Housing Center of Toledo, this forthcoming outdoor sculpture will be molded from household keys, donated by Toledoans. The concept represents the role that housing plays in creating opportunity and building a solid community. The piece, slated to be unveiled later this year, according to Turpening, plans to “fuse the keys together into a big sheet, and then create a giant key with a hand holding it.”

If you wish to be a part of this community project, there’s still opportunity to donate your unused keys from now until Saturday, June 30.