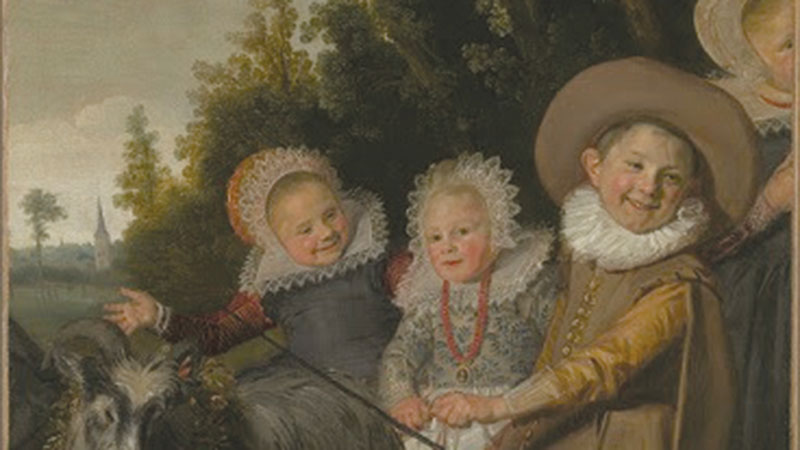 “The genius of Frans Hals’ paintings,” according to exhibit co-curator Lawrence W. Nichols, “is that he activates his compositions, they capture human emotions.”

Dutch Golden Age master Frans Hals’ painting, Van Campen Family Portrait in a Landscape (circa 1623-25), has hung in the TMAs Great Gallery since it was acquired in 2011, shortly after Brian Kennedy became the Museum’s director.

Featuring seven of the Van Campen children, the piece depicts a happy family, candidly interacting with each other. It was a major acquisition and it came with a mystery—the famous work was only part of a whole.

“We knew we were buying a fragment of the painting,” said exhibit’s co-curator Lawrence W. Nichols, adding that it was well known the acquired work had a companion piece in Brussels, Children of the Van Campen Family with a Goat-Cart, which had been on view at the Royal Museums of Fine Arts of Belgium since 1928. Plans were made to reunite the two works in an exhibit and the Brussels painting underwent cleaning.

Putting the pieces together

The Brussels painting’s conservation, from 2013-2016, offered important discoveries, Nichols explains, “Up above the child’s head there began to appear an eyeball, and when the cleaning continued, half of a face showed up. We realized that there’s even more to the composition.”

Eventually, the team located the third part of the series of paintings, Head of a Boy (circa 1623-25) in a private European collection, though the third composition will not be part of the exhibition due to water, fire, or smoke damage, says Nichols.

Working with the Brussels lab, art historians and archivists used Photoshop to speculate on the appearance of the original composition. With the depiction of the 14 known Van Campen children, the origin piece was 11 feet long, making it Hals’ largest work.

The uncovering of art history is only a part of the Family Reunion exhibit: “The show has two aims: to unite what is known of the Van Campen family portrait, and to situate it in a broader context to explore family in 2018,” says Nichols.

In addition to the reunited portrait, the exhibit will feature additional works by Hals, other family-oriented works of Dutch art from TMA’s collection, as well an interactive component. Visitors will experience how Toledoans define family, including a collage and video of Toledo community members exploring the theme of family.

“This is a chance for people to think universally, specifically, and personally,” says Nichols. “The aims of the show are to feature a great Dutch 17th century artist in a way never before done, which will show our public what conservation can bring to scholarship and enjoyment.”

For the full lineup of related programs, visit toledomuseum.org.