A Passion Project By Local Artists 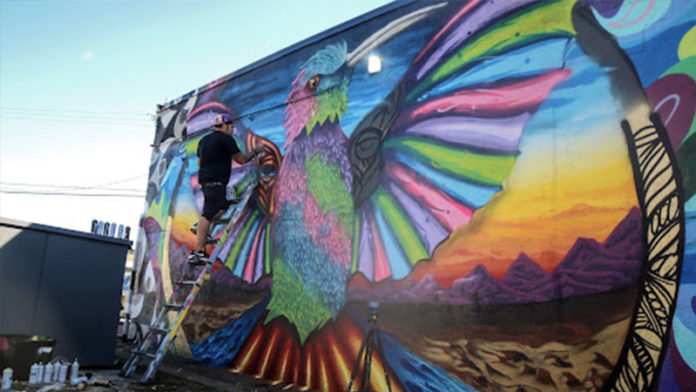 A new mural, entitled A Beacon of Light, was created last fall on the wall of Eastborn Carryout, 1110 E Broadway St. in Toledo. This vibrant work was painted by two local artists — Chris “Chilly” Rodriguez and Connor “Con Tron” Degnan — who have been working on projects together since 2017 and who both also have other independent and collaborated works displayed in the Toledo area.

The Eastborn Carryout, popular in the East Toledo community, has Chilly as a regular visitor. The side of the building, previously overgrown with weeds, trash and tagged with graffiti drew Chilly’s attention, and he asked the store manager for permission to paint it, free of charge. The owner agreed, giving him full creative control of the space. Chilly asked Con Tron to collaborate with him on this opportunity. “We thought, ‘what better place to put something like this?’ This corner, where there was no art or anything bright and colorful,” explained Degnan.

The materials for the collaborative piece were supplied by the artists, who also received donations from the community during the week-long project.

Chilly had drawn the hummingbird image, planning to paint it and then exchanged ideas with Degnan before they began to spray paint the wall. The piece, described by the artists as a freestyle design, is abstract in form. Chilly explained that Degnan’s ability to contrast colors and abstract patterns comes to the forefront of the piece. “His color choice is out of this world.” Degan countered that he enjoys Chilly’s ability to paint imagery in a colorful and realistic way, saying “his hummingbird is an outstanding centerpiece of this mural.

Lifting spirits
“The area itself was run down so the mural we painted was definitely needed. It’s for the people who live in the area…to lift their spirits and brighten their day,” said Chilly.

According to Con Tron, this piece was created with the hope of “improving the quality of people’s lives by giving them an outlet to feel positivity and growth and to be proud of their neighborhood. This concept can change our city, and world, for the better.”

Check out a behind-the-scenes video about the making of the mural here. WARNING: Contains language.