When I tell people that I have glassblowers as neighbors, they presume that I am referring to the kind of people that watch Cartoon Network until 4:00 AM, and buy Cheez-Its in bulk from Costco.  But at Gathered, located downtown on Huron Street, a 120-year-old fireproof warehouse has been converted into a glass studio and gallery.  Their walls are ornamented with art made in-house with equipment that they configure and repair themselves, including a 2,000 degree furnace. They offer classes for anyone who wants to learn how to make their own glass, and they provide parties for people to drink wine and watch custom glass being created that they can later take home. 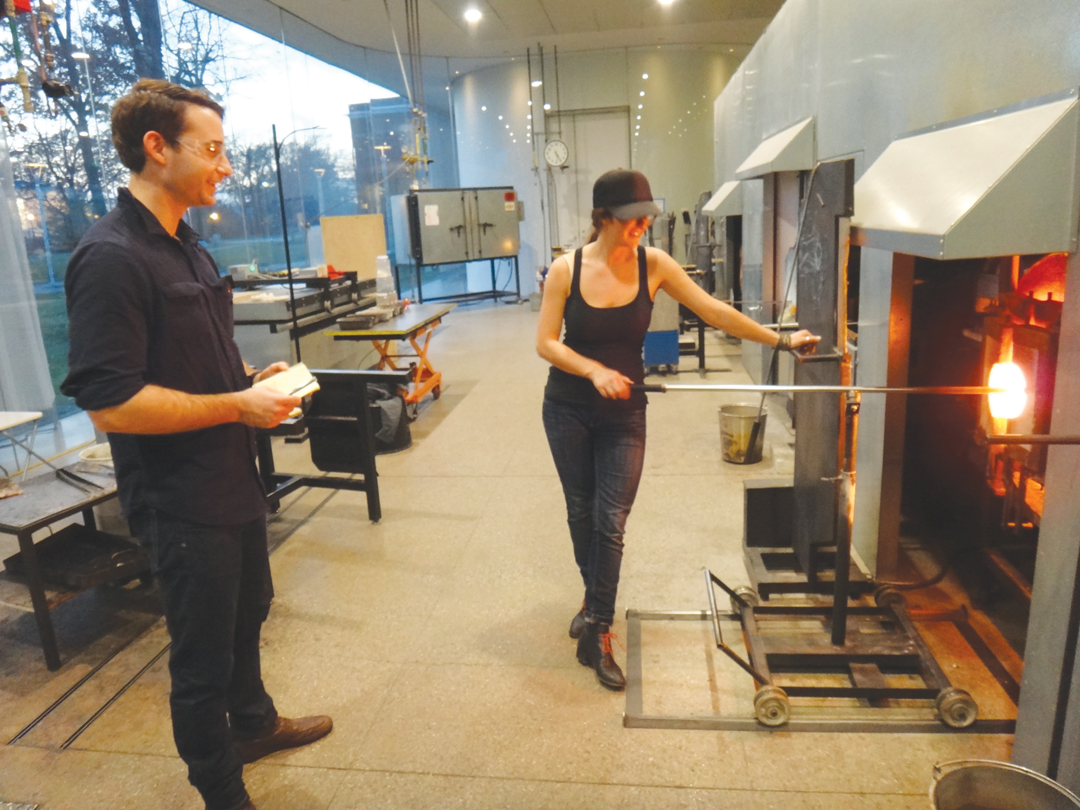 One of Gathered’s three partners is Adam Goldberg, who showed me around the studio.  Goldberg is 25, and his ski cap and college-length beard give him the appearance of an off-duty snowboard instructor.  He has a bachelor’s degree in glassblowing from Bowling Green State University, and he speaks about glass like a theologian.  In the hour we spoke, he quoted writings in several languages, and cited cultural movements from at least three different millennia.  His mentor is a seventy-year-old Italian maestro.  His work, like his speech, is metaphysical.  He showed me some decanters that can be spun and tipped over without spilling a drop of wine.  “I want to make glass approachable and playful,” Goldberg said.  “I want to make it like a toy.”

When I arrived at the Toledo Museum of Art’s Glass Pavilion for a glassblowing demonstration, I expected to meet a middle-aged grunt; a man ready to pound lava into structures with his bare fists. Instead, I was greeted by a twenty-something named Kristine Rumman, a facilitator at the Glass Pavilion. She provides daily glass demonstrations, and leads classes four days a week. On a Wednesday evening, Rumman helped me make a seasonally appropriate, glass pumpkin.

Rumman is unmistakably pretty, even when she disguises her dark eyes behind thick, black glasses, and conceals most of her curly flow of brown hair beneath a black trucker hat that she tilts to the side like Ashton Kutcher in an episode of Punk'd.  Rumman, who returned to Toledo after training for three years at a glass studio in Seattle, helped me begin by taking a steel rod to remove a small batch of molten glass from a brilliantly glowing furnace referred to as the “glory hole.”  I then covered my hot orb with shaved pieces of orange glass, dabbing and turning it like I was making a candied apple.

After more heating, I placed the rod on a steel work bench, where I spun it back and forth while pinching the glowing orb with an oversized-set of steel tweezers. Small, harmless bursts of flame spurted off the glass like baby dragons’ breaths.  The ball was then clamped from the rod and set onto a table where I pressed the center of the ball to form my little pumpkin.  Rumman then attached a molten string to my pumpkin’s dimple, and showed me how to mold a stem.  After 24 hours of cooling, I was told that I could come and pick up my very own piece of art.

During my visits, Goldberg and Rumman both referred to glass as “magical.”  The process of distorting hot liquid into design still mystifies both of them, more than ten years after they each were introduced to glassblowing at the Toledo Museum of Art—an institution founded by the Libbey family of glass magnates.  Toledo is the Glass City.  And like molten glass, the concept of our city morphs through time and pressure.  Young artists are being spun from Toledo’s industrial glass history to contribute to the future of the medium.  Rumman told me that glass is “very active, very alive,” and I left her thinking that the same could be said about the people in this town that turn it into art.

Dorian Slaybod is 27, a local attorney, and happily living in Toledo.