Lacey Campbell has a welcoming, salt-of-the-earth, Midwestern energy. Her passion for designing and making furniture is well known and you can’t help but admire her chutzpah for kicking ass in a typically male-dominated field.

Not long after obtaining her Bachelor’s Degree in Arts for Furniture Design from the Savannah College of Art and Design, she scored a job with Sauder Woodworking. In 2014 she took a leap of faith and accepted a spot on Spike TV’s reality show, Framework. While the show wasn’t a major hit, she succeeded through most of the season, making it to fourth place.

Now a full-time furniture designer at her own, home-based company, Lacey Campbell Designs, she continues to create custom pieces and rehab damaged and orphaned furniture. She’s also working on a collaborative program with other Toledo makers soon to be announced.

When did you first know you wanted to design and build furniture? 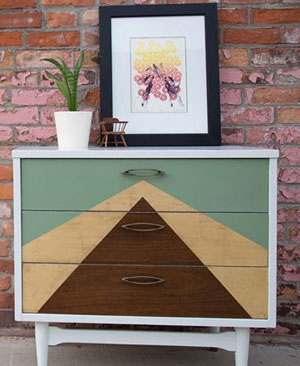 Lacey Campbell: I was actually when I was a ceramics student and I was gung-ho about being a potter for the rest of my life. I actually had a professor who focused on me, because she saw something different in how I approached and talked about ceramics— always wanting to get customer feedback.” She said, “You need to consider this more, because I don’t know if ceramics is really what you want to do… You really lean more toward the design side than the art side.”

Have you encountered any problems in furniture design because you’re a woman?

It’s definitely a man’s world… It’s stupid that I can’t just be my bubbly, girly self and still be treated the same way. I always make it a point to shake hands with someone because that usually gives them a little bit of perspective, since I have a firm, man-like handshake. And then I talk to them in a very direct way. So, I have to change my personality a little bit.

How “real” was Framework?

They recorded every day, from the time we started until the time we ended, for [two months]. And it was usually 12-hour days, so they had everything captured. But, how they edited everything was pretty funny. There were several times I caught myself watching the show and I’m like, “Wait, I didn’t say that then, I said that back on this [day]…” The time constraints were sometimes pretty accurate, although I’ve never had a customer want something in 24 hours.

Has doing the show helped you through your journey?

It’s pushed me to do other things in my life, so I really can’t knock it… I’ve been so happy working for myself.

To check out more of Lacey’s creations online, visit Lacey Campbell Designs or visit her Etsy shop at Etsy.com/shop/LaceyCampbellDesigns