I have held the future in my hand. It weighs less than a cell phone, and wraps around your head. It's called Google Glass.

Google is currently looking for third-party developers to work on Glass, and that's where Maumee-based tech company Hanson Inc. comes in. The firm has already designed numerous digital experiences, including tablet applications for HGTV, as well as wayfinding tools for both The Cleveland Clinic and The Columbus Airport—they even produced a documentary for the Toledo Museum of Art's seminal Manet exhibit. Hanson is currently looking for ways to innovate with Google Glass—“to use technology to make people’s lives easier,” says Hanson Inc's VP of Experience Innovation, Mike Osswald.

A head-mounted miniature computer, Google Glass looks like a pair of glasses without any lenses (a prescription lens version will also be available). The device displays information on a small, translucent screen that fits over the user's right eye, and contains a small camera. The machine is being developed at Google's Google X lab—the same people making driverless cars. If watching people constantly check their cell phones bothers you, brace yourself—Glass will keep its user connected to the web as long as it's turned on, and is connected to wi-fi or bluetooth.

That doesn't mean everyone you know is going to be secretly playing Candy Crush. Google Glass is still being tested, and is not commercially available yet, but The City Paper managed to secure some alone time with Google Glass. 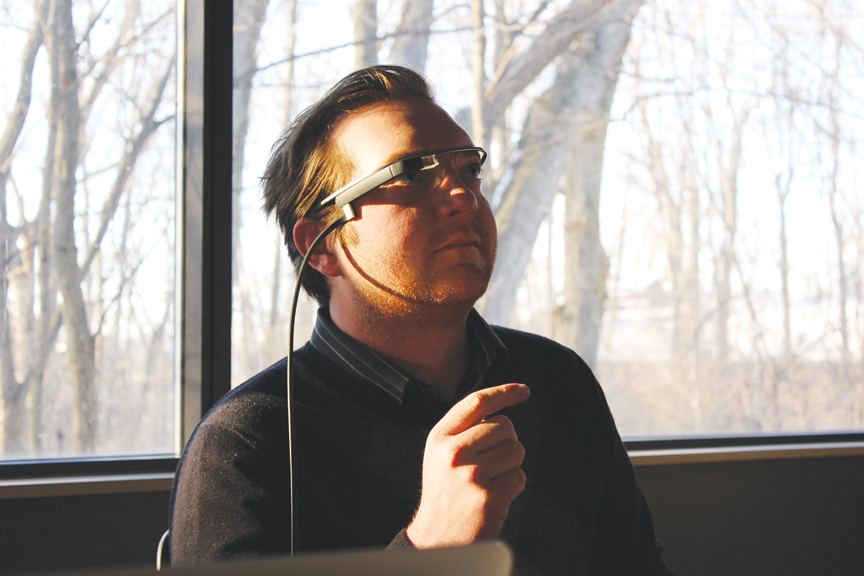 At first look, Google Glass doesn't draw attention to itself. The machine's home screen is just a clock. Glass's interface is a series of 'cards;' it cannot display very much data at once because its screen fits in the corner of one's field of vision. However, the device has several applications. It can easily take pictures, and even record ten-second videos. It can take notes, as well as surf the internet and send text messages. It even loads Youtube pretty quickly—I cued up a CNN video report in just a few seconds.

Perhaps most importantly, Glass is hands-free and voice activated. Saying “Okay, Glass” will activate the device and prepare it to perform any task in its repertoire (Glass does not always listen to the world around it—it needs to hear “Okay, Glass” first). There is a touchpad built into the right side of its frame, but I could operate Glass as well as possible without it.

The version of Google Glass we tested is still in beta testing, and I can see why. I found Glass a bit difficult to control. It had trouble recognizing my voice, and the touchpad felt jittery. Sometimes it scrolled too quickly, and sometimes not at all. The device just felt stubborn.

However, with a little coaxing, Glass performed a few tasks without me lifting a finger. It looked up the score of the last Red Wings game easily. Also, it takes pictures and video in relatively high quality. I can see how easy it would be to document a person's point of view creatively with a device like Glass.

It's easy to imagine Google Glass as the first stepping stone to a world where many Americans are fully integrated with what Glass developers call augmented reality—where we all have access to all of our computing power at all times, without using our hands. In ten years, every Toledoan jogging through Wildwood Metropark could be surfing the internet through their sunglasses while exercising.

Osswald says he sees technology moving toward “a multitude of screens;” he predicts a future where people will work and play on huge work screens, like smart boards, as well as mid-sized screens such as computers and tablets, and smaller screens such as a smartphone. The Google Glass we tested could not functionally replace a cellular phone. “It's a lot like the smart watches people are coming out with […] it really was designed to connect with a smartphone, so it's another screen. They both have a little computing power, but they work best together.” 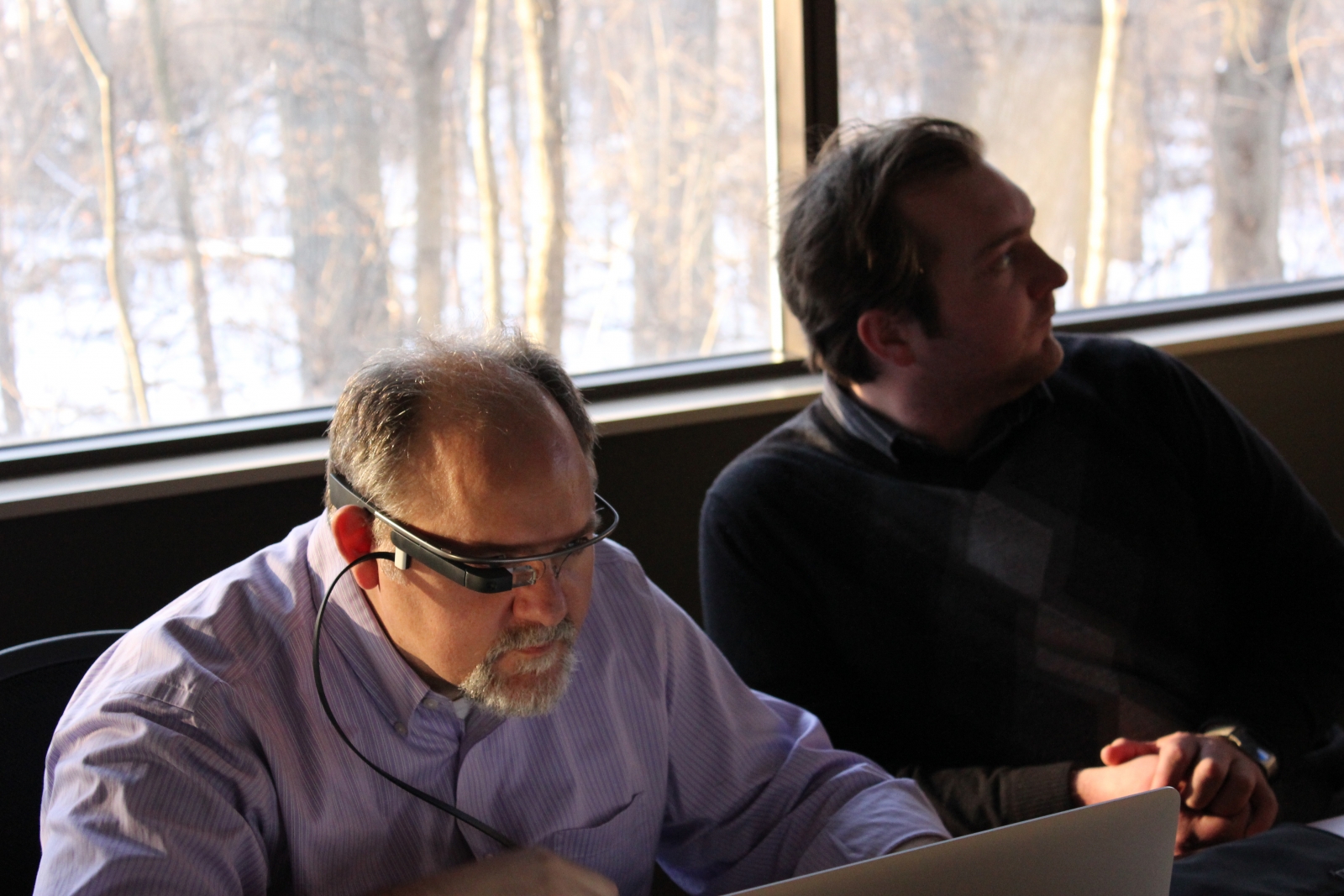 Which begs the question—what precisely would an average person use Google Glass for? Osswald suggested that Google Glass might change the way we shop, because its camera and search functions will allow consumers to compare prices more easily. In a world where Google Glass is as prolific as the iPhone, retail stores might become purely show rooms. Hanson has worked with consumer shopping before, including HGTV's Folio app, and revamping Delta Faucet's web presence, but according to Osswald they are still working out consumer applications for wearable technology.

However, the folks at Hanson were quick to point out that Glass' potential outside the world of consumer goods. “We're not just building marketing experiences, we're building business-to-business applications” said Osswald. He specifically mentioned how useful Google Glass' hands-free computing might be to surgeons, who would need to access data and communicate (possibly with other Glass users) mid-operation. Osswald says, “I think the applications for health and wellness are probably the most exciting, especially with an aging population.”

As useful as it may be, Glass also comes with ethical concerns especially regarding privacy. The machine can take discrete photographs very easily, and even though it can only take ten seconds of video out of the box, Glass is as easily modified as any other computer. When Glass hits the market, downloadable programs will allow full-length video recording almost instantly.

People are already reacting to a post-Glass world. On January 18, 2014, a man in Columbus was questioned by Homeland Security for wearing Google Glass in a movie theater—it was suspected that he was illegally recording the film.

“It's about surveillance and privacy,” Osswald says. “If you were going to an event, and took your camera, you're there to take pictures and that's clear, but what if you just walked into a restaurant full of people with a camera? […] Everything shouldn't be recorded.”

Regardless of people's apprehensions, Google Glass is coming. Hanson Inc. may have the only pair in Northwest Ohio right now, but Google Glass will be commercially available soon (Google has yet to set a release date). When these specs are unleashed, they won't replace your cell phone, but they might just change the world. Or maybe just the way the world shops.