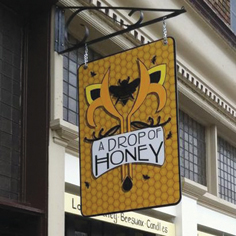 For Emily and Ronald Householder, honey isn't just a term of endearment—it's the family business.

Emily's one-year-old Grand Rapids boutique, A Drop of Honey, stocks its shelves with products sourced strictly with that golden, sticky-sweet fluid. Jarred honey, soaps, beeswax candles, lip balms, along with a small selection of beekeeping equipment and instructional books, fill the shop. This sounds simple enough, except for the fact that nearly all of the shop's inventory is sourced from the 900 hives Ronald tends to on their farm.

Ronald, a second generation beekeeper at Householder Apiaries, became the inspiration for A Drop of Honey after Emily watched him brave the hordes year after year (with nothing but denim to protect him when the temperatures were too hot for fussy costumes). Always fascinated by his unconventional line of work, she thought others might be, too.

"Before I married a beekeeper, I had never met one before," Emily says. "I kept telling [Ronald] we should open [a shop] so we could talk to other people who didn't know anything about it."

On a shopping excursion in Grand Rapids, she got her chance when she noticed an available building for lease. On a whim, the former costume designer and makeup artist snapped up the space. She opened in October of last year, and touts the benefits of honey in her boutique five days a week—both its antiseptic qualities and its ability to brighten a mood. "It's really the ultimate food source," she says.

A Drop of Honey is a challenging juggling act for the parents of eight, but the opportunity to offer customers a taste of their unique profession was worth it, according to Emily. And with all this sweet talk, one can't resist asking: do people in the business of bees still call each other honey?