On their night off, eleven Toledo chefs cook delicious food for friends and guests. They raise some funds for charity, but mainly enjoy the camaraderie of cooking together.

The Chefs Collective is a group of area chefs who host bi-monthly dinners. One member of the group hosts the dinner at their restaurant and determines the theme for the meal. Each chef is then assigned responsibility for a small course and then the entire group assists in assembling the meal.

“It’s so much fun working with your peers rather than having to be in charge,” said Chef Rob Campbell, founder of Chefs Collective. “Everybody is so selfless and jumps in. You don’t even have to ask someone to help you because they’re already helping you before you even ask.” However, attendees do not know the menu ahead of time.

“You don’t know what’s going to happen when you show up,” said Chef Mike Rosendaul, executive chef at The Toledo Club and participant in the collective. “We give you an idea behind it but you won’t know what you are having until it’s on the table in front of you.”

The idea for the collective came to Chef Campbell after watching an Anthony Bourdain show. In an episode, Bourdain joined ten chefs who closed a restaurant for the day in Spain and cooked for one another.

That show inspired Campbell to take the concept a step further to create multiple courses. He began talking with other Toledo chefs about two years ago, asking if they would be interested in teaming up for wine dinners. Last summer the notion evolved into full course meals.

So far, there have been three dinners: the first one was a beer theme at Revolution Grille, and the second was at Registry Bistro, featuring wine from Bonny Doon Vineyard. The third dinner was held in January at The Gathering in Findlay, with the theme of “Mead & Smoke.”

“The basic concept is to first hang out together and have fun, and then make some great food,” said Chef Rosendaul.

The camaraderie between the chefs is apparent with these dinners, as they share ideas on cooking techniques and styles, as well as exchanging information concerning purveyors and ingredients. 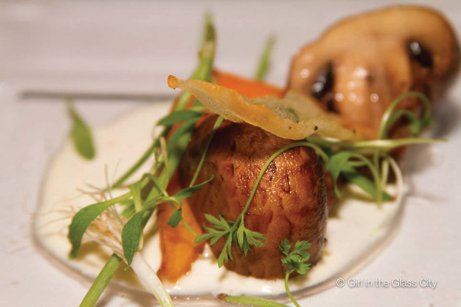 Tickets are already sold out for the next dinner, to be held at the beautiful and historic Toledo Club on Sunday, March 16. The chefs will be preparing their course to go along with their assigned wine and cheese, the theme for the evening.

The Chefs Collective’s future is undetermined. And that’s just what Chef Campbell prefers. “We’re trying to stay away from rules. We’re kind of letting it happen and letting it evolve on its own. We don’t really know where it’s going to go. I think everyone’s pretty much open to letting it kind of work itself out.”

To find out more about the Chefs Collective, check out their upcoming dinners, photos and videos on their Facebook page at facebook.com/chefscollectivetoledo.