It's less convenient. It makes us think harder. Sometimes it even costs us more. But 'buy local' proponents argue that spending our money with local business owners, rather than the
Wal-Marts of the world, is the key to our economic future.

It was a recent Thursday morning, and Fred Okun was giving an employee a ride. He hopped into the driver’s seat of a Sam Okun Produce Company truck, one of many in his fleet, and took to the city streets. Coasting down Dorr St., the retired businessman recalled the 40 plus grocery stores his company served between Detroit Ave. and downtown alone. Now? “They’re all gone.”

Four decades ago, nearly 80 percent of the Okuns’ business revolved around the little guy, accounts where they regularly distributed fruits and vegetables. They were in healthy competition with the seven other produce houses on their downtown block. Those are gone too, along with contracts the Okuns’ have lost to competition in cities as far away as Cleveland and Cincinnati. Though they are still running a business with sales in the millions, their counterparts did not fare as well after the arrival of big box stores and national retailers.

“In Northwest Ohio, without these smaller locations [to serve],” Fred’s daughter, and company president, Shelly Okun Fruchtman says, “it could be the death of you.”

Toledo is a city where corporate chains thrive. But the call to ‘buy local’ is gaining momentum. Organizers of the cause argue that where we spend our money is just as important in the long run as how much money we spend. They've taken to Facebook to organize cash mobs (such as social media maven Erin O'Bryan), lead organizations devoted to the cause (like local lawyer Kyle Cubbon), and abide by the concept in their own businesses (grocery store owner Jim Sautter of Sautter's Market). They want to do for shopping what PETA did for eating — raise our consciousness.

The statistic ‘buy local’ advocates toss around is the ‘where does the dollar go’ number. Though it varies, for every $100 spent at a locally-owned business, approximately $68 stays in the community, going back to support other local businesses, local taxes and wages for local workers. That same $100 spent at a chain store leaves only $43 locally; the rest is used for income, taxes and supplies in far away cities. “There’s been a lot of controversy with those numbers,” says Dr. Gbenga Ajilore, associate professor of economics at the University of Toledo. “But it’s more [about] the concept. A dollar spent at Wal-Mart goes to Arkansas, and a dollar spent at the Andersons stays here.”

In 2004, Ajilore conducted the Toledo Lucas County Merchant's Study for the UT Urban Affairs Center, analyzing the impact of shopping at Thackeray's Books versus Barnes and Noble. His study estimated that Thackeray's contributed $5 million back to the local economy, versus the $1 million that came from Barnes & Noble (which was largely attributed to spending by its employees). Locally-owned Thackeray’s Books died shortly thereafter; the other Toledo businesses in the shopping center where it once resided were razed to make way for discount chains Stein Mart and Costco. While money spent locally stays here, Ajilore says part of the problem business owners face is competing with huge corporations that are able to sell things at drastically lower prices. “A large firm is able to do things cheaply,” he said. “They don’t have unions, they get stuff from China, their whole focus is on getting really cheap stuff from their suppliers. A local firm doesn't have the power to do that.”

What they do have the power over is their service. When Ajilore buys music, he goes to RamaLama Records because he knows he’ll be recognized by the owner when he walks in; they might suggest a new band they think he'd like, or engage in the welcome distraction of a meandering conversation about music. “If you have a niche, your store is going to survive. You can't compete on price, but you can compete on quality and service.”

The economics of environment

Quality and service are only two factors; the environment is another. Buy local proponents argue that for produce and other goods to travel to our city, we're spending precious resources. One statistic cited on elocal.com stated that shifting 10 percent of a community's purchasing power to local produce would save 310,000 gallons of fuel annually. The Okuns themselves say fuel and other costs prevent them from efficiently serving anyone much farther than an hour from their home base. And they, like other advocates of the movement, argue that besides cost, no one outside of the area can match their involvement and investment in it.

“One of the definitions I think is in need of being refined is local. Schools, for example — Toledo Public Schools, Sylvania Public Schools — they go through a bid process. That’s fine. I get it. [But] buying local [to them] is the state of Ohio. That's not fair,” says Shelly Okun Fruchtman.“Why should somebody out of Cincinnati or Columbus come to Toledo to deliver to the school systems I pay taxes for, the schools I send my kids to, the schools that call us when they're fundraising. Local is not an entire state. Local is the people that you grow up with, and you break bread with, and you know each other's kids.”

Another frustration is the distance of corporate owners from the communities their businesses serve. Most franchisees and local managers have little control over big decisions like who will supply their goods or how much they can contribute to local charities — another frustration when dealing with franchises.

“The box stores are mostly takers from the community — they don’t give back,” says Jim Sautter of Sautter's Market. “Once in a while, they’ll make a big splash. But day in and day out, if you come in and say you have a fundraiser for so-and-so, I’m more than happy to help. If you go into a Kroger, they’ll say they have to call corporate.” 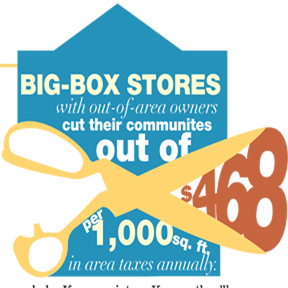 Locals are finding ways to spread the idea of the educated consumer, one who spends money with purpose rather than only for convenience. Cash mobs, groups of people who flood local businesses to exercise their economic power and create a buzz around the cause, started a little more than a year ago in other parts of the country and have become popular even in the U.K. Erin O’Bryan, a Toledo native who runs her own website design company, Irishis, started Toledo and Sylvania Cash Mobs on Facebook. The Toledo Cash Mobs’ nearly 500 members converged at Wixey Bakery last month; their first mob was at Meats and More in March.

“Owners have said they’ve seen triple and quadruple their normal business on those days, and the big thing is these customers have discovered new local businesses that they are likely to visit again,” O’Bryan said. "I think that's what Toledo needs more of right now.”

Toledo Choose Local, a volunteer-based, non-profit organization established in 2007 to promote locally-owned businesses and educate the community on the benefits of buying local, uses cash mobs and public campaigns to spread the word as well. “We believe that ownership matters,” says Kyle Cubbon, a Toledo lawyer and the recently-elected president of Toledo Choose Local. “We want businesses to come and stay, not come and go.” Cubbon and TCL's previous president, Pam Weirauch of Pam’s Corner, are vocal advocates for a locavore movement they hope will gain momentum in the city. “When I was a little farm girl, we used to come to town and trade grain,” Weirauch says. “I was what I now know to be a locavore before I even knew that was a word. I came from a small town. Everybody did business with somebody they knew.”

The education isn't just about enhancing consumer awareness, but also encouraging entrepreneurs to continue with their endeavors, despite the obvious challenges. A TCL cash mob in March 2012 at The Art Supply Depo, an independent art supply store in the Warehouse District downtown, gave the Depo “10 times the business of a ‘good’ day,” says owner Jules Webster. “The experience boosted our morale [and] made us feel validated as a new business.”

“Forget political debates — if you want to create local jobs, buy local,” Webster says. “I created my own job as owner [and] manager, and now contribute to the economic livelihood of my two part-time employees.” By comparison, a report from the March 2008 Journal of Urban Economics showed that national chains often cause job loss in local communities. Opening a new Wal-Mart reduces retail employment by an average of 150 jobs at the county-level as local businesses are forced to down-size or close. Big box chain retailers, the choose local community argues, are a costly convenience; local businesses are an investment in our economic future.

The economics of choice 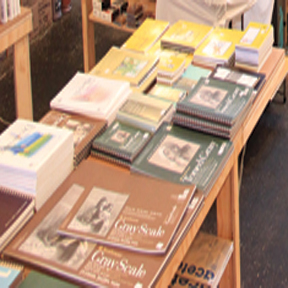 Most choose local proponents are less hardline than their counterparts in other movements; they hope to at least make people more aware of their decisions. “I struggle with saying that it's what people should do,” Ajilore says. “I think the best thing to do is make people aware that spending is not equal, that how they spend has impact, and then let them make the decision.”
In fact, many business owners say they welcome healthy competition.

“I think that Toledo’s mentality can be very negative — we're our own worst enemies,” says Shelly Okun Fruchtman. “We think that Toledo can’t be a big player. We just have to support each other. We [have many businesses that are] really good at what [they] do. And if [they’re] not, then shame on [them] and [let the consumers] find somewhere else that can make [them] happy. That is the way it's supposed to work.”

*Full disclosure: Alia is a board member at Toledo Choose Local, an organization devoted to promoting buying local. 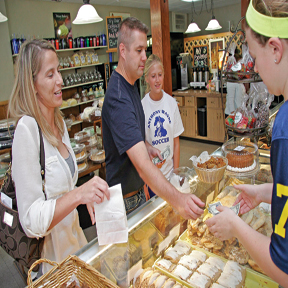 Local
business =
people
connections.
Owners live in their community
and create their own rules, as opposed to those who must follow corporate headquarter guidelines. 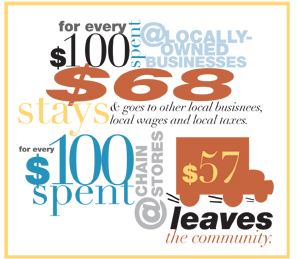