Michael Hampton was 53 years old when he first went to prison. Arrested for a domestic violence charge and dealing with an undiagnosed bipolar disorder, the Toledoan couldn’t break the negative mindset developed over a lifetime of bad habits.

“Before I went to prison, I didn’t care about nothing, not even myself,” he says. For awhile, he says staying in prison seemed like a good idea—he was an old, convicted felon who would likely be in his 60s by the time he got out; there wouldn’t be much of anything for him outside of those walls. “I was tired—so, so tired, of everything.” 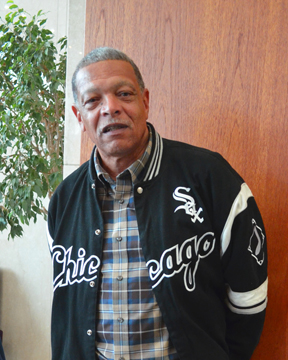 Hampton’s struggles and emotions are frequently echoed by other prisoners who fall prey to recidivism, the habitual cycle of crime and incarceration. According to a 15-state study by the Bureau of Justice Statistics, more than two-thirds of former prisoners are reincarcerated within three years of their release. Combined with overpopulated facilities and rising costs—according to the the Ohio Department of Rehabilitation and Corrections, an Ohio inmate costs taxpayers over $25,000 per year—recidivism is crippling our society.

Unlike most problems, though, the solution to this social dilemma is brilliantly simple: ensure that former prisoners don’t go back to prison. The difficulty lies in the means. In Toledo, a force of coalitions, advocates and individuals are implementing new methods to reduce recidivism rates through reentry programs which assist former offenders and their families with transitioning back into the community.

Starting from the bottom

Toledo’s reentry movement is part of a growing national trend to combat increasing recidivism rates. Currently, the national recidivism rate hovers around 43 percent. Many states are either introducing new programs or reinvigorating existing ones. Before these efforts, many released inmates were left to their own means.

Reggie Peacock vividly remembers his struggles after a 17-year stint in federal prison for drug-related charges. Now the owner of Majestic Lifestyle & Fitness in downtown Toledo, Peacock had less than 80 cents to his name when he was released.

“A lot of [prisoners], as far as coming out that door, they basically don’t give you anything,” he says. “You might get a bus ticket or a cab to the halfway house or wherever you’re going, but that’s about it.”

Peacock says he was fortunate to have support from his family providing him housing, transportation and a job. Surprisingly, he suggests that he faced the strongest resistance during his required time at a state-sponsored halfway house.

“Once I got to the halfway house, I felt like the rules were so hard, and for a person who already had trouble abiding by the rules, it seemed like it was almost impossible for them to make it,” he says. “A lot of little challenges become big challenges.” 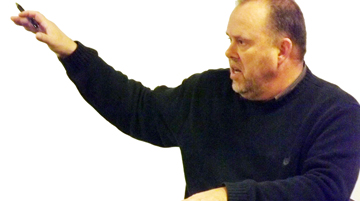 David Kontur wants to fix that issue. As chairperson for the Northwest Ohio Reentry Coalition, Kontur, along with a team of lawyers, program directors and volunteers, provide resources and guidance for ex-prisoners and their families during the reentry process.

“Our goal is to coordinate [reentry agencies and groups] so that we’re on the same page, because no one person or service can do everything to help,” he says.

Perhaps the best example is the coalition’s First Wednesdays program, where representatives from more than 20 departments and organizations make themselves available for one-on-one consultations. Kontur says most ex-prisoners face a slew of issues during the reentry process.

At the November meeting, over 100 people filled the seats and lined the walls of the Commissioner’s Chambers at Toledo’s Government Center. A few of them are simply looking for help with minor offenses, but many of the attendees are fresh out of prison, on post release control and trying to get back on their feet.
“With First Wednesdays, our goal is to make it as easy as possible for them to speak directly with someone who can help them with their specific problems. Instead of them coming to us, we go to them,” Kontur says.

The coalition was recently recognized for their work during a statewide re-entry meeting, but for tangible signs of the program’s success, look no further than Michael Hampton—after serving two years of his sentence, Hampton left the London Correctional Institution, near Columbus, on parole, eventually returning to Toledo just as First Wednesdays were starting.

“I’ve been through all these hoops, I’ve been through all these doors,” he laughs. With help from First Wednesdays, Hampton was off parole after a year. By then, he had his own house and a job as an outreach worker for ex-cons and their families. He still drops by every First Wednesday meeting to encourage the attendees and invite them to Citizen Circles, a local support group for former prisoners. “All I try to do is let them see results,” he says. “This will work if you put the work into it.”

“Always more we can do”

Hampton isn’t the only person who has found success through reentry programs—according to the Ohio Department of Rehabilitation and Corrections, Lucas County’s recidivism rates have dramatically declined over the past 8 years; from 2006 to 2009 alone, recidivism rates dropped from a high of 36.2 percent to 23.4 percent.

Kontur says the ultimate goal is to have a centralized reentry system, similar to Michigan’s successful Michigan Prisoner Reentry Program, or MRPI, which cut that state’s orison population by 8,000 inmates and saved millions of dollars in prison expenses. Kontur has many allies, too.

“We’ve definitely made a lot of progress, which is great, but there’s always more we can do,” says Tom McCarter, chairperson for the Northwest Ohio Reentry Coalition. McCarter was also recently hired as Reentry Co-Coordinator for the Criminal Justice Coordinating Council, another local organization that supports strong reentry programs. The CJCC was awarded a grant last month that will fund new reentry programs held inside the correctional institutions, including a pro bono service where lawyers check that an inmate’s legal status is clear before they return to society. A lawyer himself, McCarter worked with criminal defendants for over 40 years. He is all too familiar with these issues.

“What happens is you have an individual who serves their time, gets out and starts to make improvements,” he says. “But then they get pulled over for a broken [tail]light or speeding, something worthy only of a ticket. When the officer pulls up their information, that individual still has warrants out for offenses which happened years ago but were never addressed when they went to prison. So the officer arrests them for those extenuating warrants, they ‘technically’ break parole, and they’re back in prison.

“That shouldn’t be happening, it’s just unnecessary and discouraging for everyone involved. With this Second Chance grant, hopefully we can work to clear up any lingering issues and help properly situate them, so their reentry into society is much smoother and lasts.”

While such programs are an important stepping stone for successful reentry, many proponents say there will always be two obstacles: society and the individual. 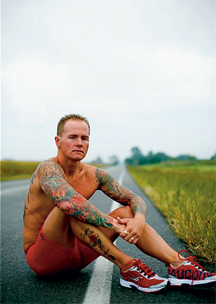 Todd Crandell is no stranger to either obstacle—after abusing drugs and alcohol and trips through prison like a revolving door for 13 years, Crandell founded Racing for Recovery, a counseling center for individuals fighting drug and alcohol addictions. Crandell says he overcame his issues with a strong support system and finding a passion that motivates him (Iron Man triathalons). He now shares his model with his clients, many of whom are parolees in need of a drastic lifestyle change.

“I’ve dealt with people who have done 15-20 years in prison, have gotten out, chosen to pick up right where they left off, and then go right back to prison,” he says.

Crandell suggests the problem lies in a “punishment over treatment” mentality. “It’s like driving a car with a flat tire—you can’t expect that tire to roll correctly; you have to change it,” he says. “I believe in punishment for offenses, definitely, but there also needs to be help with that punishment.” Treating the cause, Crandell says, keeps the problem from repeating itself.

Peacock agrees, adding that self-motivation is essential, too. “I faced the reality of my situation. I thought what if I die and for the majority of my life I was incarcerated?” he says. “Once I started looking at it like that, I said, ‘No, I can’t let that happen. I’m not going that route.’”

It’s a sentiment echoed by Hampton. “There’s that old saying: ‘When you’re tired of being tired, you’re going to do something about it.’ And that’s what happened to me,” he says.  Now 60, Hampton says his reentry experience defined him for the better, and he wants his success to be the standard, not the exception, for former inmates and their families going through similar situations.

The rewards, Hampton says with a smile, are priceless. “I don’t look at myself as a felon. When people see me now, they say, “That’s a productive man right there.”

Trying to reenter the community after prison is a daunting task, but these local groups and programs ease the load and offer
invaluable guidance back home.

The Reentry Coalition of Northwest Ohio works with over 50 local agencies, groups and businesses to provide services and directions for ex-offenders and their families. The coalition has established and assisted with multiple programs related to housing, employment, drug and mental health issues, child support and more.

The Toledo Bar Association Pro Bono Legal Services Program hosts this expungement clinic once a month. Attorneys can assist ex-offenders in starting the expungement process, provided they meet specific criteria. The free clinic starts at 1pm the second Tuesday of each month at The Source (1301 Monroe St.). For more information, call 419-418-5323 or visit toledobar.org/Pro-Bono.

This monthly meeting gives ex-offenders and their families the resources to deal with reentry challenges. Representatives from multiple agencies, businesses and programs provide a variety of services, from applying for a new driver’s license to finding a house or job. These free meetings run from 11am-1pm at the Commissioner’s Chambers at One Government Center (time and location subject to change). For more information, call 419-377-0625.

The CJCC provides a centralized hub for criminal justice information and history. They also allocate grant funds through criminal justice and reentry programs throughout Lucas County. CJCC works in tandem with the Reentry Coalition of Northwest Ohio to coordinate reentry groups and services for ex-offenders and their families.

This state program—an acronym of Making Use of Services Can Lead to Empowerment—provides local resource guides related to reentry. The information is available to offenders and their families prior to and after their release; it may also be useful to individuals involved with the reentry process. For more information, email DRC.MUSCLE@odrc.state.oh.us or visit drc.ohio.gov/web/offenderreentry.htm.

These support group meetings allow ex-offenders and their families a chance to share their challenges and support one another. Meetings also focus on topics like employment, education, substance abuse, personal motivation and more. For meeting schedules and more information, email DRC.CitizenCircles@odrc.state.oh.us.

This faith-based program offered by the Toledo Correctional Facility works to maintain healthy relationships between inmates and their families. Inmates and their spouses work with program volunteers to address the unique challenges they face. For more information, visit drc.ohio.gov/Public/toci.htm.

Drug-related crimes are frequently responsible for high recidivism rates, since many substance abusers don’t receive the proper treatment and support to combat the underlying problem. These local branches of national support groups offer a safe and supportive environment for addicts to face this challenge. Alcoholics Anonymous, 419-308-9862 or toledaa.com; Narcotics Anonymous, 419-250-6262 or natoledo.com; and Cocaine Anonymous, 419-385-900 or ca-toledo.com.