Last year, the City of Toledo paid ReCommunity Recycling $1.1 million to sort, package and sell curbside-collected recyclables. An increase from a payment of $33,000 in 2012. In 2017, Toledo is on track to pay ReCommunity even more money.

“We continue to look at opportunities to reduce costs for our recycling waste collection,” Mayor Hicks-Hudson stated in an emailed response to the matter. “Recycling is important for reducing the amount of materials entering our landfills.”

Ohio’s recycling rate, according to the Ohio Environmental Protection Agency (EPA), has hovered around 30 percent of all our trash over the past 7 years. In 2015, Ohioans disposed of 414,108 tons of garbage, recycling 184,865 tons of it.

Though we recycle more, we also generate more garbage. According to our national EPA, in 1960, each American generated on average 2.68 pounds of garbage per day. By 2014, that had increased to 4.44 pounds each day. 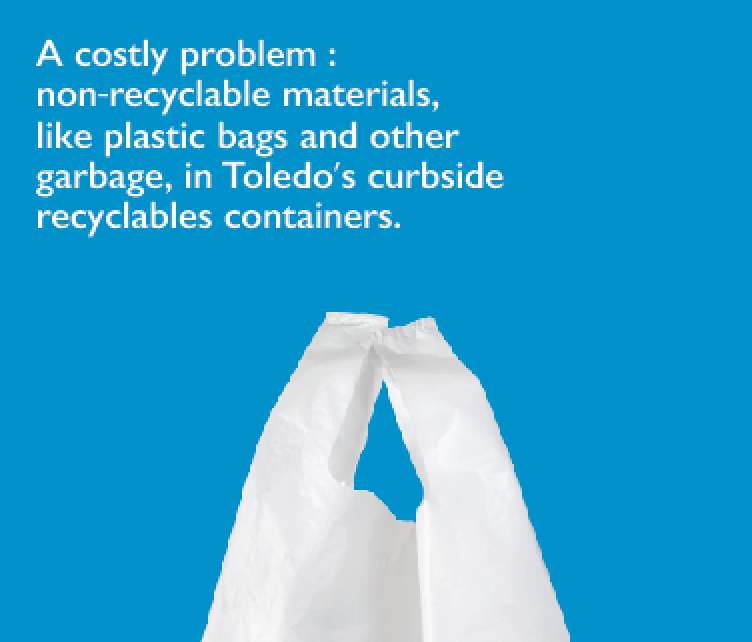 Why should we recycle?

“Two big reasons,” says Matthew Franchetti, Associate Professor of Mechanical Engineering at the University of Toledo and author of the textbook Solid Waste: Analysis and Minimization, “one, it allows us to reuse resources. The bigger reason is recycling conserves energy, it is less environmentally damaging than taking the raw material from the earth.” Recycling aluminum cans, for example, requires only 6 percent of the energy required to produce aluminum from raw materials.

Toledo’s recyclables placed in curbside recycling toters are taken to Akron, to a ReCommunity Recycling Materials Recovery Facility where they are sorted and separated by a huge machine in a 19-stage process. Non-recyclable materials are removed and sent to the landfill while sorted materials are sold to companies who transform them into new products. ReCommunity, America’s largest processor of recycled materials, has 29 facilities in 14 states.

A costly problem has been non-recyclable materials, like plastic bags and other garbage, in Toledo’s curbside recyclables containers. A recent audit of 66 tons of Toledo’s recyclables found 37 percent either not recyclable or so contaminated they had to be sent to the landfill. “You could have 90 percent of your neighbors doing a model job of recycling,” says Bill Franklin, Toledo’s Commissioner of the Department of Public Service, “and then somebody uses that blue can as a garbage can and pollutes that whole load [of recyclables]. The transfer station will reject it and send that load to the landfill. Don’t put garbage in the blue can.” Franklin explains that reducing the contamination of recyclables to 28-30% would save Toledo $25,000 each month, or $300,000 annually, on its bill to ReCommunity.

Not long ago, Toledo made money on recycling, earning $475,497 for a two year period between 2010 and 2012. “The market is the biggest reason,” says Franklin. “Recyclables are at a historic market low.”

“China, the largest purchaser of recycled materials, reduced purchases,” says Paul Rasmusson, Director of Public Service. “Two other reasons: cheap oil, and our stream of recyclables contains too much “residue.” 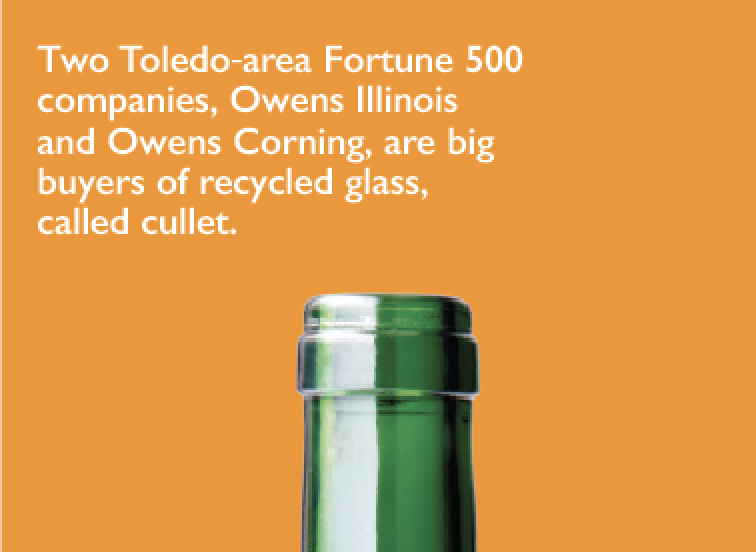 “Glass is one of those infinitely recyclable materials,” Says OI’s Global Vice President of Sustainability Jim Nordmeyer, “using recycled glass means we use less of the… naturally occurring raw materials— silica, soda ash, and limestone—.” For every 10% of recycled glass used, OI saves about 3% in energy, and 5% in greenhouse gas emissions. Nordmeyer explains, “Glass is recycled at a rate of about 33%— we’d like to get that much higher. The supply of cullet, the quality necessary, is not sufficient for what we would like to use. There are 10 deposit states,” — where citizens can redeem a glass bottle for 5 or 10 cents— “those 10 states account for about 60% of the glass recycled in North America.”

Phoenix Technologies International, a Bowling Green plastics company, converts plastic bottles into plastic resin pellets which it then sells to about 25 companies. Phoenix sorts the bottles to filter out impurities, sending the melted plastic through fine-screen filters as it is made into pellets. Phoenix’s factory can process 100 million pounds of plastic bottles each year.

The average market price today for #1 plastic bottles is currently 15 to.16 cents per pound, compared to 2011 when those same bottles went for 35 cents per pound. Phoenix purchases its bottles from various waste management companies and community sorters. “The price is tied to the price of oil, which currently is very low,” says Lori Carson, director of commercial operations for Phoenix. “Many companies are committed to being more sustainable. How are we going to conserve resources, how are we going to keep things from going to the landfill?”

“I recycle. Everyone has a duty to recycle, in my opinion,” says Toledo City Councilwoman Dr. Cecilia Adams. “Additionally, recycling will help preserve the life of the Hoffman Road Landfill… curbside collection is the best method for getting citizens to participate in recycling. Recent stories of contamination of the recycling stream, however, have been disappointing.”

“As mayor,” adds Mayor Hicks-Hudson, “I believe in recycling, but I recognize the need to better educate our community to understand what is recyclable waste.”

The City of Toledo looks like it will be paying a lot of money so Toledoans can conveniently recycle curbside into the foreseeable future – so that all your plastic, glass, cardboard, and paper waste gets transformed into new products, saving energy and reusing resources. Toledoans might want to try to make more of an effort to place only the acceptable materials in the blue recycle bins.

The Green Restaurant Association is an international non-profit focused on bringing sustainability and green practices to the restaurant industry. The organization, operating in 41 states as well as Canada, uses a certification system to encourage environmental sustainability in a variety of areas, such as water, waste, food, energy, and pollution reduction. Check out these ethical and delicious, GRA-certified Green Restaurants around Ohio and Michigan. -dinegreen.com

Toss at Kennedy Union
The University of Dayton, Dayton.
udayton.edu/diningservices

Twigs at Oxford
The University of Michigan, Ann Arbor.
umich.edu

Professor Matthew Franchetti heads up the University of Toledo’s Business Waste Reduction Assistance Program, a joint project between the Lucas County Solid Waste Management District and The University of Toledo where UT grad and undergrad students perform no-cost waste assessments for large and medium-sized businesses, then provide the business with a list of recommended solutions.

What percent of these recyclables actually get recycled? 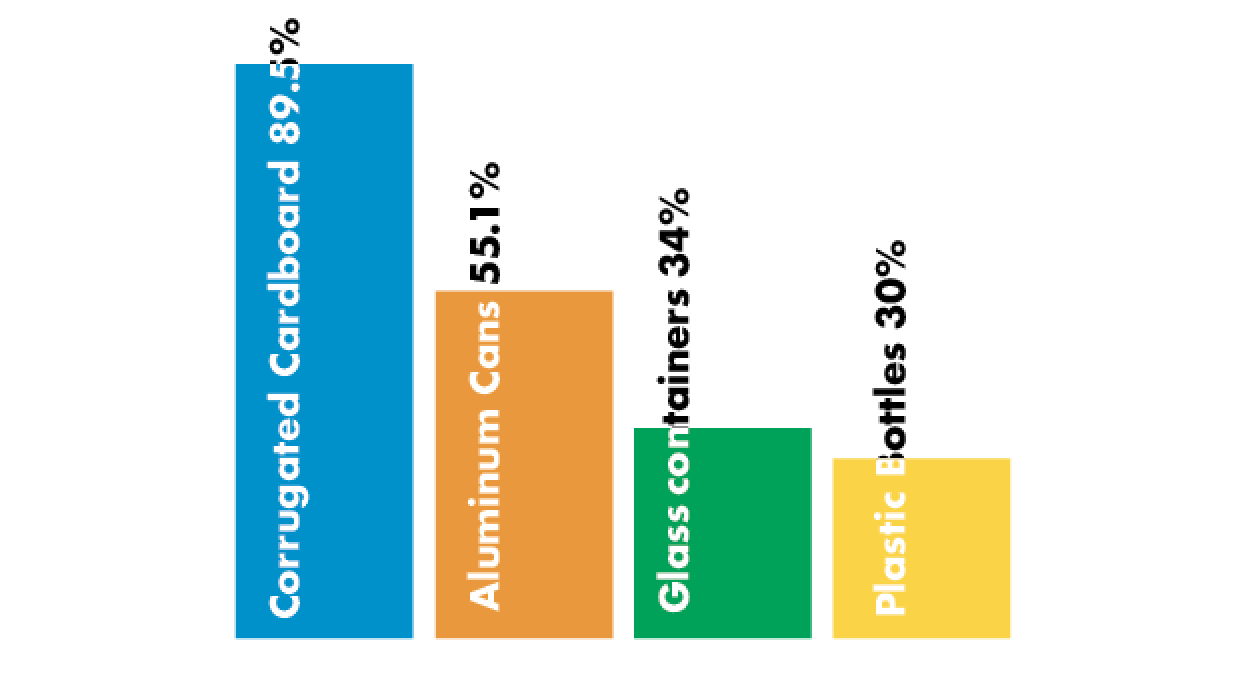